Incumbent President Maduro is backed by Russia, China, Iran and Turkey. More than 50 countries including the US have rallied behind Guaido. 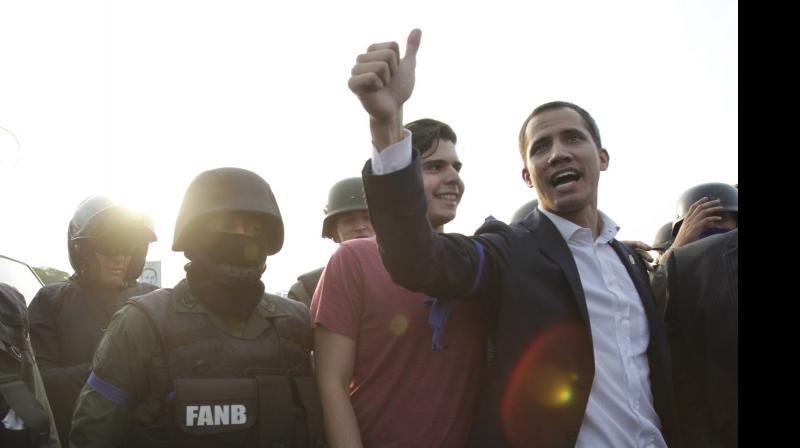 Protests erupted in Caracas which the ruling establishment termed as an "attempted coup". (Photo: AP)

Caracas: The crises in Venezuela was addressed by many world leaders raising concerns on the developments.  An apparently carefully planned attempt by opposition leader Juan Guaido to demonstrate growing military support on Tuesday, however, disintegrated into rioting in the Venezuelan capital, sparking calls for restraint.

Erdogan further said, "Those who are in an attempt to appoint a post-modern colonial governor to Venezuela should know that the only (way) to determine how a country shall be governed is through democratic elections." Besides Turkey, Maduro is backed by China, Russia and Iran.

The European Union on Tuesday called for "utmost restraint" in the Venezuela crisis. "The EU is closely following the latest events in Venezuela. We reiterate that there can only be a political, peaceful and democratic way out for the multiple crises the country is facing," EU diplomatic chief Federica Mogherini said."

"The European Union rejects any form of violence and calls for utmost restraint to avoid the loss of lives and an escalation of tensions," she added.

Mogherini said the EU "firmly stands with the Venezuelan people and its legitimate democratic aspirations".

Hundreds of Venezuelans rallied in central Madrid late Tuesday in support of their country's self-proclaimed leader Juan Guaido, as riots broke out in faraway Caracas.

As police fired tear gas at the crowds in Caracas, around 300 people gathered in the Puerta del Sol square in Madrid in support of Juan Guaido, waving Venezuelan flags.

A spokeswoman for the Spanish government had earlier said, "Madrid strongly hopes that there will be no bloodshed" in Venezuela.

Spokeswoman Isabel Celaa called for "democratic elections" and said Madrid supports a "peaceful" outcome to the Venezuela crisis. Spain has thrown its support behind Guaido, whom it recognises as interim leader of economically-strapped Venezuela. over President Nicolas Maduro.

A number of Venezuelan troops have sought asylum in Brazil's embassy in Caracas, a senior Brazilian official said.

A source in Brazilian President Jair Bolsonaro's office confirmed to AFP there had been "various applications" from Venezuelan soldiers. Brazilian media reported 25 had applied so far.

The petitions for asylum came as Bolsonaro threw his support behind Venezuelans "enslaved by a dictator," a reference to President Nicolas Maduro.

"Brazil is on the side of the people of Venezuela, President Juan Guaido and the freedom of Venezuelans," Bolsonaro said in a series of tweets.

"We support the freedom of this sister nation to finally live a true democracy," he said. Brazil is among more than 50 countries that have recognized Guaido as Venezuela's President.