Pompeo hopeful Indo-Pak tensions would come to an end

US Secretary of State Mike Pompeo said on Thursday he had "good conversations" with Indian and Pakistani leaders. 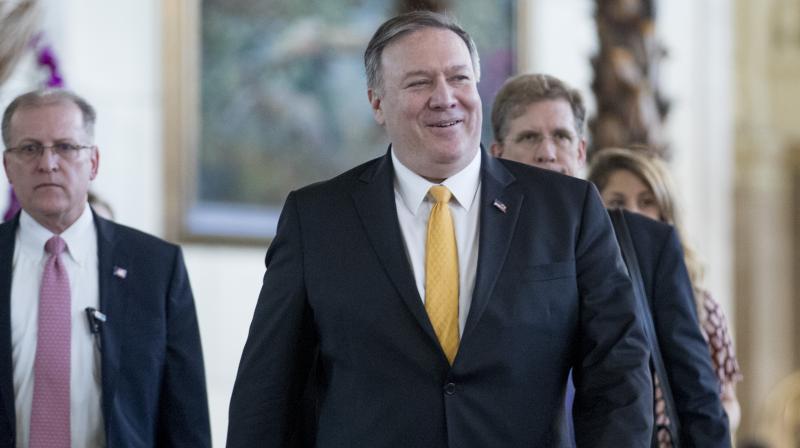 Tensions have escalated between India and Pakistan in the wake of the Pulwama attack claimed by Pakistan-based terror group Jaish-e-Mohammed. (Photo:AP)

Washington: US Secretary of State Mike Pompeo said on Thursday he had "good conversations" with Indian and Pakistani leaders and was hopeful that the rising tension will come down between the two nuclear-armed neighbours. Over the last two days, Pompeo spoke to the leaders of the two countries including External affairs Minister Sushma Swaraj, National Security Advisor Ajit K Doval and Pakistani Foreign Minister Shah Mehmood Qureshi.

"We were and continue to be very engaged with the issue between India and Pakistan," Pompeo told reporters travelling with him from Hanoi, Vietnam to Manila in the Philippines.

"I spent a good deal of time on the phone last night talking to leaders in both countries, making sure there was good information exchanged, encouraging each country to not take any action that would escalate and create increased risk," he said.

"I had good conversations, and I am hopeful that we can take down the tension there, at least for the time being, so they can begin to have conversations that don't portend risk of escalation to either of the two countries. So we're working hard on that," Pompeo said.

Tensions have escalated between India and Pakistan in the wake of the Pulwama attack claimed by Pakistan-based terror group Jaish-e-Mohammed (JeM). Forty CRPF soldiers were killed in the on February 14 suicide attack in Jammu and Kashmir. India carried out air strikes against the biggest training camp of JeM in Balakot.

In the operation, a very large number of JeM terrorists, trainers, senior commanders and groups of jihadis who were being trained for suicide attacks were eliminated. Pakistan on Wednesday claimed it shot down two Indian fighter jets over Pakistani air space and arrested an Indian Air Force pilot.