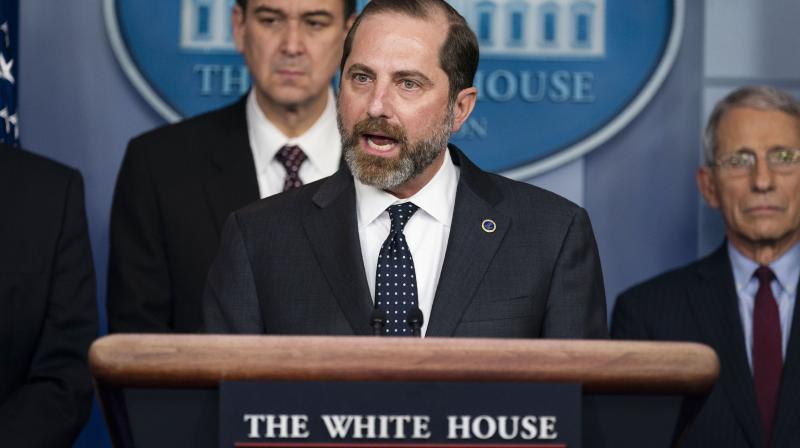 U.S. health secretary Alex Azar speaks during a press briefing on the coronavirus, in the briefing room of the White House, Friday, Jan. 31, 2020, in Washington. (AP)

WASHINGTON: The U.S. said Friday it was declaring a public health emergency and temporarily banning the entry of foreign nationals who had traveled to China over the past two weeks to contain the spread of the coronavirus.

Sweeping new restrictions will also be imposed on American citizens, with those returning from the province at the disease's epicentre placed in facilities for mandatory 14-day quarantines, said health secretary Alex Azar.

U.S. citizens coming from other parts of China will undergo health screening at ports of entry and then be placed under monitored self-quarantine at home.

"I have today declared that the coronavirus presents a public health emergency in the United States," said Azar during a briefing at the White House, adding that the directives would take effect on February 2 from 5:00 pm eastern time (2200 GMT).

"Foreign nationals, other than immediate family of US citizens and permanent residents, who have traveled in China within the last 14 days will be denied entry into the United States for this time," he added.

The restrictions apply to people who have traveled to the designated areas in the two weeks prior to their attempted entry.

There have been seven confirmed US cases of the 2019 Novel Coronavirus, which originated in a live seafood market in Wuhan, in Hubei province, in December.

The World Health Organization has already declared the epidemic a global emergency, and the Chinese death toll has risen to 259 while total infections reached nearly 12,000, surpassing the SARS epidemic of two decades ago.

Three US airlines, American, Delta and United said they would soon suspend all flights to China.

Earlier, officials imposed mandatory 14-day quarantine orders on 195 Americans who were air evacuated from Wuhan, the first time a federal directive of this kind was issued for more than 50 years. The last case involved a person who was evaluated for smallpox in the 1960s.

A plane carrying the repatriated citizens, who include diplomats and their families, touched down at the March Air Reserve Base in Riverside, California, on Wednesday and officials initially said the passengers would be asked to voluntarily isolate themselves for up to 72 hours.

Early signs were good, and the Centers for Disease Control and Prevention (CDC) declared that none of the individuals showed symptoms of the 2019 Novel Coronavirus.

One of the individuals tried to leave the base and was placed under quarantine by the state of California, said CDC official Marty Citron, before the federal action.

The repatriated group submitted samples for testing at the CDC headquarters in Atlanta -- but officials now say they are not certain about the accuracy of their diagnostic tools.

Given that the extent of asymptomatic transmission was not yet clear, a negative test was not being used as a release criteria.

"It isn't like it's a horrible test, but it is not a test that's absolute," added CDC immunologist Anthony Fauci.

Despite the seemingly drastic actions, the U.S. public "should not let fear or panic guide your actions," said senior CDC official Nancy Messonnier, but instead exercise normal precautions for stopping the spread of respiratory viruses.

These include washing your hands thoroughly for at least 20 seconds, disinfecting surfaces, staying home when sick and covering your cough or sneeze with a tissue and then throwing it in the trash.

"We do not currently recommend the use of facemasks for the general American public," said Messonnier. "This virus is not spreading in your communities."

"Please do not assume that just because someone is of Asian descent that they have this new coronavirus," she added, noting there are four million Chinese Americans in the United States.