The UN’s World Food Programme ships 2,000 tonnes of beans and cooking oil to feed some of Uganda’s 1.4 million refugees 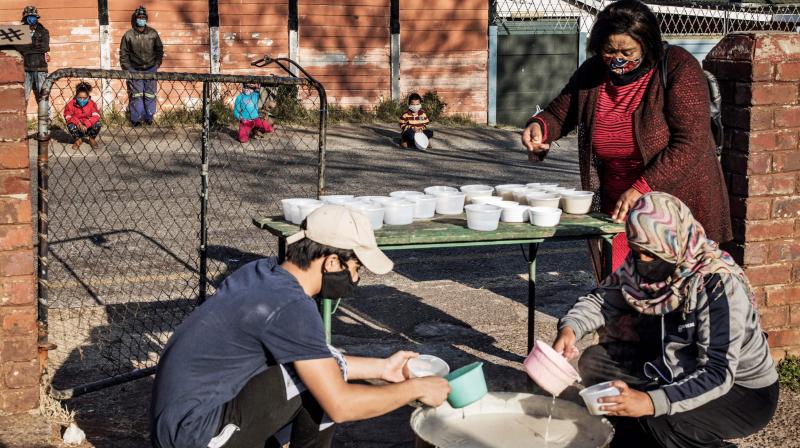 Volunteers of the non profit organisation and charity group "Hunger has no Religion", wearing protective facemask, prepare portions of porridge to distribute to children for breakfast at an underprivileged areas, in Westbury suburb, in Johannesburg. (AFP)

Kampala: Bottlenecks at borders as government screen lorry drivers to contain the new coronavirus are putting the delivery of vital food supplies in East Africa at risk, the U.N.’s World Food Programme (WFP) warned on Friday.

“We could have problems feeding our beneficiaries ... if the situation doesn’t improve,” Julie MacDonald, WFP’s deputy director in Uganda told Reuters. She said they only had enough food left for June.

The agency is shipping in 2,000 tonnes of beans and cooking oil to feed some of Uganda’s 1.4 million refugees. Some of it is stuck at Kenya’s Mombasa port and some is stuck at the Ugandan border, she said.

The line of lorries at the border town of Malaba between Kenya and Uganda stretched 60 km (37 miles) this week, said Mercy Ireri, an official from the Kenya Transport Association.

Kenya’s port of Mombasa and Tanzania’s Dar es Salaam are the main gateway to the Indian Ocean for several landlocked nations, including Uganda, Rwanda and South Sudan.

Uganda requires truck drivers from neighbouring Kenya and Tanzania to take coronavirus tests before they are allowed to enter. Tests are also being carried out on the Tanzania-Kenya border. But delays in returning results has forced truckers to wait for up to seven days, said Jackson Katende, spokesman of the Ugandan cargo transport industry body.

“Business is at a standstill,” he said.

Paralysis at the Uganda-Kenya border, he said, had more than doubled the time for goods to move from Mombasa to the Ugandan capital Kampala and raised costs by up to 40%.

Africa has so far reported nearly 130,000 cases of the new coronavirus and 3,790 deaths, lower than many other continents, possibly due to its much younger population and early lockdowns by many African nations.

But authorities are on high alert because any spike could overwhelm decrepit health systems.

Uganda is the main transit point for cargo from Mombasa en route to Rwanda, Burundi, South Sudan and Democratic Republic of Congo.