Ramaphosa said at this meeting the controversy around the Gupta brothers' relationship with Zuma was also raised. 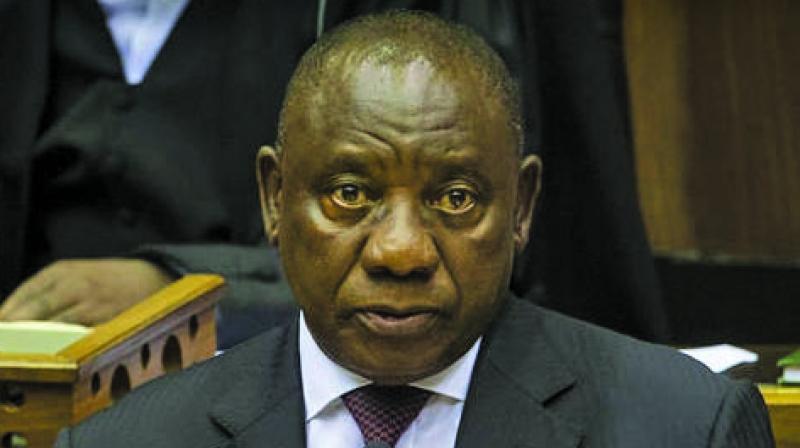 Ramaphosa has also committed to testifying before the commission when called to do so by the deputy chief justice. (Photo: File)

Johannesburg: South African President Cyril Ramaphosa has made public an affidavit in which he revealed the details of his meetings with the controversial Gupta brothers to the Zondo Commission of Inquiry.

Cyril Ramaphosa said there was only one meeting that he considered significant where he raised the brothers' relationship with former president Jacob Zuma and the issue of the Gupta family landing a Jet Airways flight full of wedding guests at the Waterkloof Airforce base.

He said the only occasion on which matters of substance were discussed was when the Gupta brothers requested a meeting with ruling African National Congress (ANC) party officials to discuss their situation in relation to the closure of their bank accounts.

This was in the wake of all major banks shutting down the accounts of the Gupta companies in its mining and media empire, citing reputational and legal risk, as increasing allegations of their involvement in state capture and irregular deals with government entities emerged.

Ramaphosa said at this meeting the controversy around the Gupta brothers' relationship with Zuma was also raised.

The three Gupta brothers have been accused of misusing their relationship with Zuma to secure lucrative deals.

The entire family, originally from Saharanpur in Uttar Pradesh, has since relocated to Dubai.

"One of the issues that I raised at that meeting was the landing of the 747 Jumbo Jet at Waterkloof Airforce Base in 2013. I stated that they had, through their actions, placed the president in an invidious position."

"Tony Gupta's reaction was that permission for the plane to land had been obtained and given by the Indian High Commissioner (Virendra Gupta at the time)," Ramaphosa said.

He added that all other interactions with the Gupta brothers "were at events where nothing of any consequence was discussed".

"I never engaged with them beyond basic greetings, pleasantries and common courtesies," the president said.

The chairperson of the commission, Deputy Chief Justice Raymond Zondo, allowed on Friday Ramaphosa's request to make public the affidavit submitted by him to the panel.

"I just wish to announce that I did receive, early in July, such an affidavit from the president. He has made a request that the commission discloses the affidavit to the public, so that there may not be speculation about what the affidavit is saying.

"(The president) also undertook to encourage cabinet ministers that when they are approached by the commission in this regard, they should cooperate," he said.

Ramaphosa has also committed to testifying before the commission when called to do so by the deputy chief justice.

Earlier this week, Zondo expressed his disillusionment at senior government officials, including former and current ministers, many of whom have been implicated in wrongdoing by witnesses, not coming to the commission to testify of their own accord.