The NICD on Friday said nationally there had been 18,762 new COVID-19 infections and 215 COVID-19 related deaths overnight 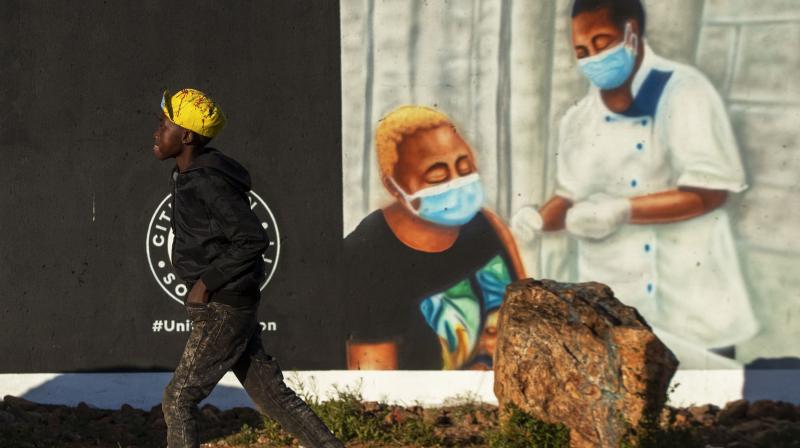 Johannesburg: The Delta variant of COVID-19, identified in at least 85 countries and first detected in India, is likely responsible for the exponentially rising daily number of virus cases in South Africa's economic hub, Gauteng province, a leading epidemiologist has said here.

Official data would be released by the National Institute of Communicable Diseases (NICD) next week, but it is likely to show that there had been an increase in the transmission of the Delta variant, which is 60 per cent more transmissible than the Beta variant -- first identified in South Africa, Shabir Madhi, director of Vaccines and Infectious Diseases Analytical Research Unit at Wits University, told news channel ENCA.

Madhi's comments came as hospitals reported a shortage of beds and burial organisations in Gauteng, especially affecting the Indian community.

"The only way to explain what we are currently seeing is the seeding of a new variant coupled with the waning of immunity.

"Those individuals that have been infected (in the first two waves) are still susceptible to being re-infected, especially when there is a new variant that evolves that is relatively resistant, but they still remain protected against severe infection," Madhi said on Saturday.

The NICD on Friday said nationally there had been 18,762 new COVID-19 infections and 215 COVID-19 related deaths overnight, with 63 per cent of cases in Gauteng province.

Madhi said the current third wave, which is causing more infections and deaths than the previous waves, had surprised him and many others.

"All indications are that we are probably dealing with a spread of a new variant, the Delta variant in particular.

"The magnitude of this is completely unexpected and the worst part is that this is not yet the peak of these hospitalisations. In all likelihood, the peak of the hospitalisations will only occur in the next 23 weeks, including the number of people that are dying. That number is going to continue increasing, which is really concerning," he said.

Madhi called for a ban on all mass gatherings as the most important way to reduce the number of infections.

That is the bottom line. It doesn't matter whether you're ten or fifty people  in a poorly ventilated space those ten or fifty people are going to contribute to hundreds of other infections if they are not cautious at those mass gatherings and particularly if they're not wearing face masks, he said.

A number of schools in Gauteng province have been shut down as teachers and learners increasingly test positive for COVID-19.

The government started a mass vaccination programme for educators on Wednesday. The plan expects to vaccinate 582,000 teachers for COVID-19 protection within a fortnight.

The Education Ministry said on Friday that more than 105,000 people had been vaccinated across the country in the first two days alone.

South Africa has so far reported over 19 lakh cases of the coronavirus with more than 59,000 deaths.