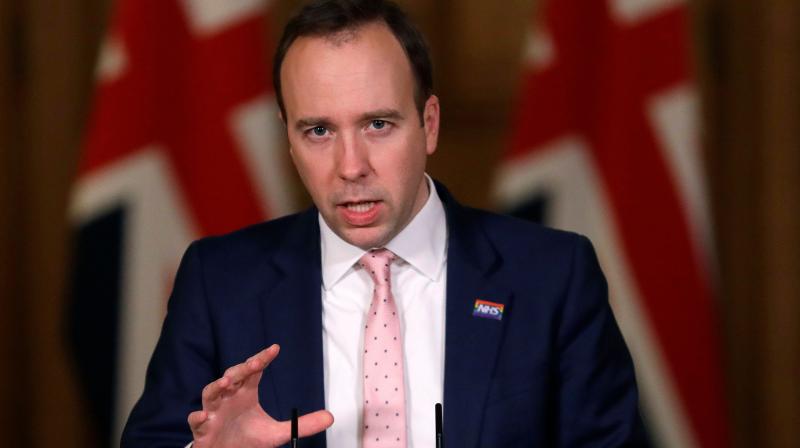 Britain's Health Secretary Matt Hancock attends a remote press conference to update the nation on the status of the Covid-19 pandemic, inside 10 Downing Street in central London on December 23, 2020. - Britain on Wednesday introduced restrictions on travel from South Africa over the spread of another new variant of coronavirus, UK Health Minister Matt Hancock said. "We're placing immediate restrictions on travel from South Africa," Hancock said, adding that two cases of the "highly concerning" new virus strain had been discovered in Britain. (AFP)

LONDON: Britain on Wednesday introduced restrictions on travel from South Africa over the spread of another new variant of coronavirus, UK Health Minister Matt Hancock said.

The restrictions, which applied with immediate effect, were introduced following the discovery of two cases of the virus strain in Britain.

"This new variant is highly concerning, because it is yet more transmissible, and it appears to have mutated further than the new variant that has been discovered in the UK," Hancock said, referring to a strain of the virus discovered in Britain which has also been found to be more contagious.

The health minister said that all individuals in the UK who had contracted the variant originating in South Africa had been placed in quarantine as well as their close contacts.

In addition to the travel restrictions, Hancock said the government was also asking anyone who has been in close contact with someone who had been in South Africa in the last two weeks to quarantine.

"They must restrict all contact with any other person whatsoever," he said.

The discovery of cases of what officials believe is a new, more transmissible variant of the coronavirus in the UK follows the announcement last week that a new strain had spread throughout the south of England.

More than 50 nations also imposed their own travel restrictions on the UK, including France.

A ban on cross-Channel freight to Europe has wrought havoc around the key port of Dover and led to fears of food shortages in the country's supermarkets because of paralysis in supply chains.

Hancock on Wednesday announced the expansion of strict lockdown measures across further parts of the south of England to contain the spread of the disease.

With more than 68,000 deaths from the virus, the United Kingdom is one of the hardest hit countries in Europe.