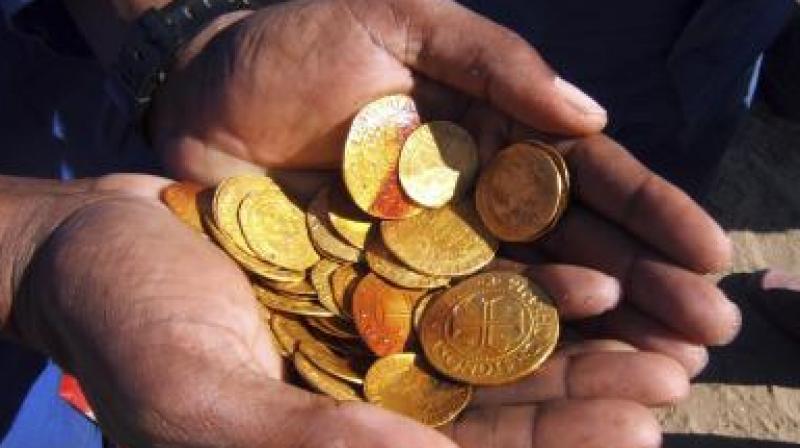 The central bank governor John Mangudya said the coin will have a trickle-down effect that will eventually help average folk. (Representational Image/AP)

HARARE: After working as an overnight security guard at a church in Harare's impoverished Mabvuku township, Jeffrey Carlos rushes home to help his wife fetch water to sell.

Prolonged water shortages mean most residents of the capital city of more than 2.4 million must source their own water. Carlos is lucky because the property he rents has a well and his family can haul up buckets of water to sell to neighbors.

This is our gold,” he says of the well water.

“If we are lucky, we can sell up to 12 buckets of water (per day) for $2, said the 50-year-old father of three. Thats about enough money to buy the familys food for the day, he said.

Rising prices and a fast depreciating currency have pushed many Zimbabweans to the brink, reminding people of when the southern African country faced world-record inflation of 5 billion% in 2008. With inflation jumping from 191% in June to 257% in July, many Zimbabweans fear the country is heading back to such hyperinflation.

To prevent a return of such economic disaster, President Emmerson Mnangagwa's government last month took the unprecedented step of introducing gold coins as legal tender. The countrys central bank, the Reserve Bank of Zimbabwe, said that because the value of the one-ounce, 22-carat coins would be determined by the international price of gold they will help tame the runaway inflation and stabilize the nation's currency.

The glitter of the gold coins is hard to see for Zimbabweans struggling each day to eke out a living. The government sees things differently and is pleading for time.

Although expensive at an average price of just below $2,000 per coin, central bank governor John Mangudya said the coin will have a trickle-down effect that will eventually help average folk.

The ordinary man will benefit more from the stability (provided by) these gold coins. Where there is stability, money will have value and stability in prices, said Mangudya ahead of the launch. He said the central bank plans to introduce smaller denominated gold coins in November to allow ordinary people to also use them as a saving mechanism. The smaller coins will be half an ounce, a quarter of an ounce and 10% of an ounce, he said.

But many such as Carlos say they can hardly afford a meal, let alone earn enough to save.

Where will I get the money to buy the gold coins? It is for them, the rich. Poor people like me do not see any difference. Things continue to be hard in this country, he told The Associated Press between trips to the well to pull up buckets of water.

Gold coins are a scheme for the elite. The rich get richer, the poor get poorer, said Gift Mugano, an economics professor during an online roundtable debate titled: Is there gold in the coins? With so many Zimbabweans scrambling to get food to eat each day, there are questions if the gold coins will help them.

People are struggling. They are living from hand to mouth so most people may not actually have the money to save in the first place. Most people are in survivalist mode because of inflation, said Prosper Chitambara, a Harare-based economist.

To get by, many are forced to take up multiple jobs.

Carlos, in Mabvuku, says he gets about $100 dollars a month from his job as an overnight security guard for a church and the bar next door. That's hardly enough to pay rent, school fees and other basic needs. Sometimes, he exchanges water for food items.

If we fetch water for someone but they dont have money, so we get tomatoes, vegetables, beans or maize. Thats how we get food, he said.

His wife, Christwish, 43, prepares the days evening meal       the staple maize (corn) meal and vegetables plucked from a small home garden        over a wood fire. Because of Zimbabwe's lengthy power cuts, the children do their homework by a candle, although their parents press them to use it sparingly.

The firewood costs a dollar for a small bundle enough (to cook) for a single meal. The candles are also expensive, lamented Christwish, who supplements the family income by doing household chores for better-off families in exchange for money or food items.

Items previously regarded as basics are now out of reach, she said.

We last ate bread with margarine on Christmas Day,” she said. “Now we just see these things in the shops and leave them there.