Burials have begun in a cemetery that holds victims of the 2014-15 Ebola outbreak that killed thousands in the West African country. 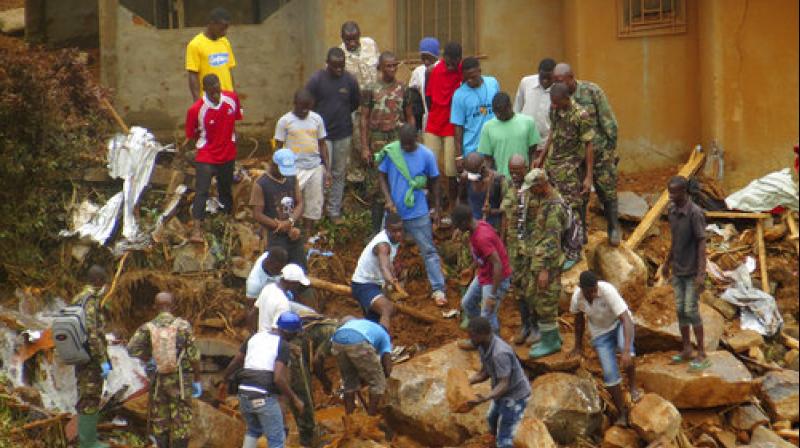 Mudslides and torrential flooding has killed many people in and around Sierra Leone's capital early Monday following heavy rains, with many victims thought to be trapped in homes buried under tons of mud. (Photo: AP)

Freetown: Rescue officials in Sierra Leone warned Friday that the chances of finding survivors in the debris of this week's mudslides "are getting smaller every day," as bereaved and homeless survivors faced the magnitude of all they have lost.

Burials and rescue efforts pressed on amid the threat of further disaster. Up to 450 bodies have been recovered in and around the capital, Freetown, after Monday's mudslides and flooding, according to Dr. Simeon Owiss Koroma, the government's chief consultant forensic pathologist. Some 600 others are missing and feared dead.

At least 122 of the victims are children, and a similar number have been orphaned by the disaster, the aid group Save the Children said.

Sayo Jalloh, who lost a son, a brother and 15 other family members, has been too numb to mourn. At a camp for those made homeless in the hard-hit Regent neighborhood, she has been having trouble sleeping and pleads with her traumatized daughter to eat.

"I just keep wondering why I don't see them or even dream about them," she said of her lost relatives. "It just seems like when someone has travelled. I can't even locate the house where used to live anymore, other than to just point at the area."

Burials have begun in a cemetery that holds victims of the 2014-15 Ebola outbreak that killed thousands in the West African country.

Many people have been unable to find loved ones and victims often are too mangled and decomposed to be identified. But the government has vowed to hold burials for all.

"The death toll is climbing by the day," Elhadj As Sy, secretary-general of the International Federation of Red Cross and Red Crescent Societies, told reporters in Geneva, adding that the disaster is "way beyond the capacity of the government alone."

The threat of further mudslides continues. The government has warned residents to evacuate a mountainside where a large crack has opened. Rainfall is in the forecast for the coming days, slowing recovery efforts.

Some critics accuse the government of not learning from past disasters in a city where many poor areas are near sea level and lack good drainage. The capital is also plagued by unregulated construction on its hillsides.

The government's main focus right now is getting people away from areas still under threat, Zuliatu Cooper, the deputy minister of health and sanitation, told The Associated Press.

"The rains are still pending and there is a possibility that we will have another incident," he said.

Some parts of the capital are without clean drinking water because of damage to pipelines. Malaria is also a concern, as many of the estimated 3,000 homeless are sleeping without mosquito nets.

Jalloh and her surviving family members are among them.

"I am just imagining where we live now - on empty ground? My body is paining me," she said.