Grace’s attempt to neutralise Mnangagwa ended very differently - leaving her and her husband languishing under house arrest in Harare. 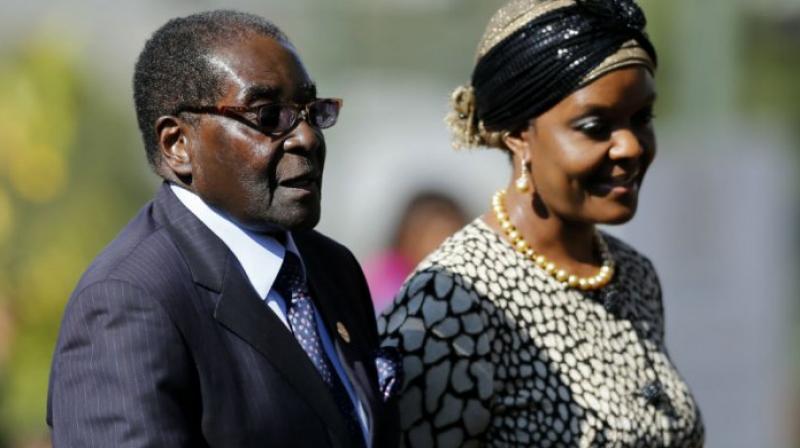 Grace’s political plans were backed by the so-called G40, a group of young supporters that has earned a reputation for aggression. (Photo: AFP)

Harare: President Robert Mugabe’s downfall was caused by the ambitions of his combative wife Grace, whose emergence as his likely successor proved a step too far for Zimbabwe’s military, analysts say.

Grace Mugabe - 41 years younger than her husband - was once dismissed as a lightweight shopping addict.

But she became increasingly active in public life in recent years, and became the frontrunner to take the top job when Mugabe last week sacked her arch-rival, vice president Emmerson Mnangagwa.

The military - determined to stop Grace, 52, being named as the new vice president - moved in on Wednesday, taking control of the country and signalling the imminent end of Mugabe’s rule.

“The crisis has been triggered by Grace because she wanted to grab power and to have Mugabe remove a lot of people,” Shadrack Gutto, director of the Centre for African Renaissance Studies at the University of South Africa, said.

“She overreached herself. She has done a lot to accelerate the removal of her husband from power.

“The military decided that enough is enough.”

Grace’s political plans were backed by the so-called G40, a group of young supporters that has earned a reputation for aggression.

The faction, which includes some ministers, has been the primary target of the military officers who announced on state TV in the early hours of Wednesday that they would bring “criminals” close to Mugabe to justice.

‘They had to act’

“The Zimbabwean army feel they have the right to have a president they approve of,” Knox Chitiyo, of the Chatham House think-tank, said.

“They had to act now before Grace was appointed as vice president at the ZANU-PF party congress in December. Grace’s team got within weeks of success.”

Grace, born in South Africa, was one of Mugabe’s secretaries when their affair began in 1987, and they had two children in secret before the president’s wife died in 1992.

The couple then married at a lavish ceremony in 1996 attended by Nelson Mandela, before having a third child.

Grace was awarded a doctorate by the University of Zimbabwe, where her husband is chancellor, reportedly just three months after enrolling, and in 2014 became the head of the ZANU-PF party’s women’s wing.

She has often been accused of extravagant spending on luxury clothes and international travel, and of involvement in corrupt land deals.

Dubbed “Gucci Grace”, “The First Shopper” or even “DisGrace”, she showed her political mettle in 2014 with her campaign against then-vice president Joice Mujuru, who was a contender to succeed her husband.

Grace launched sustained verbal attacks against Mujuru, accusing her of plotting to topple the president.

Soon afterwards, Mujuru was ousted and later expelled from the ruling ZANU-PF party.

But Grace’s attempt to neutralise Mnangagwa ended very differently - leaving her and her husband languishing under house arrest in Harare.

Despite that, her supporters have sought to popularise nicknames like “Dr Amai (Doctor Mother)” and “queen of queens”.

In speeches she had railed against anyone accused of disloyalty to the president, and her short temper hit the headlines in August when she allegedly assaulted a model who was with two of her sons at a South African hotel.

Grace was granted diplomatic immunity and made a swift exit from the country.

She once told a South African television programme that she is no longer concerned about what people think of her.

“I have developed a thick skin, I don’t even care,” she said. “My husband says ignorance is bliss.”

With President Mugabe in increasingly poor health, Grace may now seek exile or try to secure some level of protection for her and her family as Zimbabwe enters a new era.