WHO team to assist South Africa in reinforcing COVID-19 response

South Africa, at present, has the world's fifth largest virus caseload with over 5,79,000 confirmed cases and more than 11,000 deaths 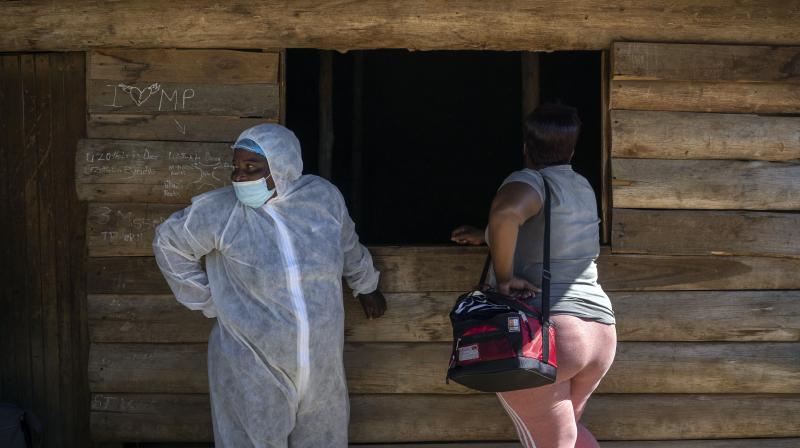 Across Africa and around the world, the COVID-19 pandemic has disrupted the supply of antiretroviral drugs to many of the more than 24 million people who take them, endangering their lives.(AP)

The team comprises 43 members and 16 arrived in the country on Friday.

Over the last three weeks, the number of new confirmed cases in South Africa has dropped from a peak of over 12,000 a day to an average over the past week of around 5,000 a day.

The recovery rate has increased from 48 per cent to 80 per cent.

"We have received queries on why there would be a need for the (WHO) surge team if we are past the surge," Mkhize said.

"I would like to emphasise for our people that we are not past anything: we are still the country with the fifth highest positive cases in the world," the minister said.

South Africa, at present, has the world's fifth largest virus caseload with over 5,79,000 confirmed cases and has reported more than 11,000 deaths, according to the tally by the Johns Hopkins University.

Mkhize said apart from the impact on the health system that the coronavirus has had, "we are still faced with the devastation it has caused in our social lives, our well-being, the economy and the environment".

"With the threat of resurgence remaining very real, we would not want to repeat recent history witnessed in some countries and allow a second surge to wreak even further destruction," he said.

The WHO team will be looking at the South African situation "with fresh eyes and may be able to identify blind spots or offer a perspective we might not have considered", the health minister said.

Citing the WHO's assistance to the country with earlier outbreaks of cholera and listeriosis, Mkhize said South Africa has a proud record of partnership with the organisation.

The WHO had provided invaluable guidance during the FIFA 2010 World Cup, which coincided with the global H1N1 outbreak and threatened to scupper the football spectacle that was hosted for the first time on the African continent in 2010, he said.

"Whilst the WHO name was well known and trusted, it was usually not part of everyday civilian conversation - now (because of the COVID-19 pandemic) the WHO is part of our work language, our dinner conversations, our social media banter, and a lot of arguments, Mkhize said.

"What I am most proud of is that the WHO has remained committed to all nations despite some being critical and even withdrawing sorely needed funding and resources," the minister said.

On Saturday, President Cyril Ramaphosa announced that the National State of Disaster, which was declared in the wake of the COVID-19 pandemic, has been extended till September 15 in South Africa.

The government, however, has lowered the nationwide lockdown to Level-2 of its five-level strategic approach to deal with the pandemic to allow economic activity to resume in the country.