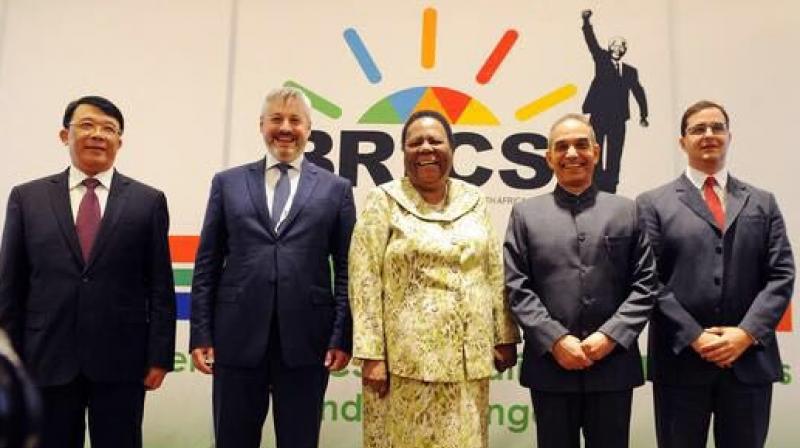 On the sidelines of the BRICS Education Ministers' meeting here, the minister of state for HRD echoed the views of his counterparts that many of the current traditional jobs will become redundant or demand different qualification requirements in future. (Photo: @dr_satyapal/Twitter)

Johannesburg: Union minister Satya Pal Singh has said the young generation needs to be prepared for challenges of the "fourth industrial revolution" where robotics, artificial intelligence and 3D printing would dominate the world.

He also said that India lagged behind in human resource development because even after Independence, the country followed the education system which the British introduced.

On the sidelines of the BRICS Education Ministers' meeting here, the minister of state for HRD echoed the views of his counterparts that many of the current traditional jobs will become redundant or demand different qualification requirements in future.

"In the last three or four years, we have done extremely well in India, and now we are waiting for the fourth industrial revolution where robotics, artificial intelligence, 3D printing and such kinds of things will dominate the world. We have to prepare our young generation for these emerging challenges," Singh said, calling for urgent interventions.

He explained how India under Prime Minister Narendra Modi has already started preparing for these challenges several years ago through the introduction of programmes like Digital India and Start-up India.

Singh underlined the role of digital technologies to enhance education, saying it was the key to help developing countries such as India and South Africa prepare its youth for the future.

"India is famous for having had universities thousands of years ago as far as its knowledge and wisdom goes, but over the centuries, we lost our traditions of lifelong learning, especially after the British came to India and tried to destroy our systems and introduce theirs. Unfortunately, even after gaining independence, we followed the same kind of system, and that is why we lagged behind so much in the so-called human resource development arena," Singh told a gathering of members of the local and expatriate Indian community, ahead of the BRICS Summit of heads of states later this month.

India has 29 crore students in around 1.6 crore schools and colleges, so the country has done "tremendously well" in using technology in education and digitisation the education system, he said.

"There have been lot of mutual agreements signed between India and South Africa in the past two or three years and I am looking forward to further agreements in the field of human resource development," the minister said.

Perhaps South Africa could learn from India in making education accessible, affordable and improving the standard and quality of education through such systems, he said.

"South Africa is still lagging behind if you compare the two countries, but with our long-shared ties, we can exchange our good practices and both countries can learn from each other," the minister concluded.