World   Africa  14 May 2020  Burundi kicks out WHO officials as they raise concern over mass political rallies
World, Africa

Burundi has 27 confirmed cases of the coronavirus, but some have raised concerns that more cases exist 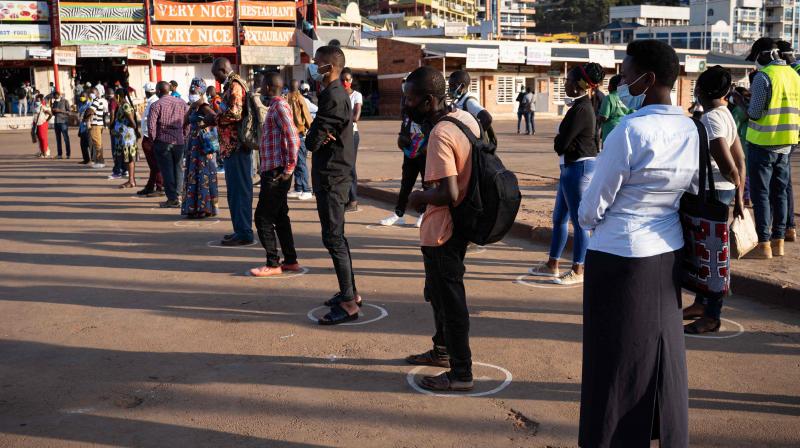 People stand in white circles drawn on the ground to adhere to social distancing measures to curb the spread of the COVID-19 coronavirus as they wait for a bus at Nyabugogo bus station in Kigali, Rwanda. (AFP)

Kigali, Rwanda: Burundi is kicking out the World Health Organisation's top official in the country just days before the presidential election and after the WHO raised concerns about crowded political rallies.

A foreign ministry letter seen by The Associated Press says the WHO representative to Burundi, Walter Kazadi Mulombo, has been declared persona non grata and must leave the East African nation by Friday.

The letter says three WHO experts also must go.

The letter has no explanation for the expulsions. Reached by phone and asked for details, Foreign Minister Ezechiel Nibigira hung up Thursday morning.

The WHO representative, Mulombo, did not immediately respond to phone calls.

Burundi has 27 confirmed cases of the coronavirus, but some have raised concerns that more cases exist.

Authorities have been accused of downplaying the virus, and rights groups have alleged squalid conditions and lack of access to quarantine facilities, Burundi is using virus restrictions to limit election observers, however, telling the East African regional bloc that any arriving foreigners would face a 14-day quarantine.

The previous election in 2015 sparked deadly political turmoil as president Pierre Nkurunziza successfully ran for a third term that some said he had no right to pursue.

This time he's not running, but critics have accused the ruling party of targeting the leading opposition party and its supporters ahead of the vote.

Some fear further unrest if this election's results are disputed over allegations of rigging.