At least 160 killed as crowded church collapses in Nigeria

However, the state-run Nigerian News Agency reported that up to 200 people could have been killed. 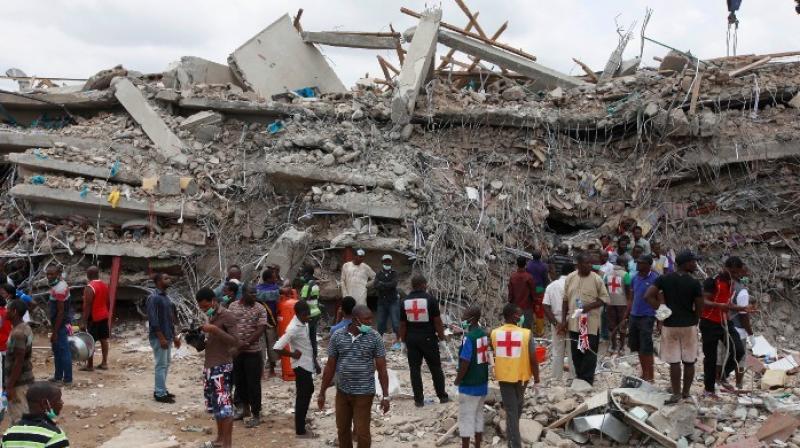 Rescue workers gather at the site of a collapsed building belonging to the Synagogue Church of All Nations in Lagos, Nigeria. (Photo: AP)

Lagos: The roof of a crowded church collapsed onto worshippers in southern Nigeria on Saturday, killing at least 160 people, witnesses and an official said.

The Reigners Bible Church International in Uyo, capital of Akwa Ibom state, was still under construction and workers had been rushing to finish it in time for Saturday's ceremony to ordain founder Akan Weeks as a bishop, congregants said.

Hundreds of people, including Governor Udom Emmanuel, were inside when metal girders crashed onto worshippers and the corrugated iron roof caved in, with the state-run Nigerian News Agency reporting that up to 200 people could have been killed. Emmanuel and Weeks, who preached that God will make his followers rich, escaped unhurt.

Bodies of at least 60 victims have been retrieved but the toll could mount as a crane removes debris, according to a rescue official who spoke on condition of anonymity because he is not authorised to speak to reporters.

The governor's spokesman, Ekerete Udoh, said the state government will hold an inquiry to investigate if anyone compromised building standards. Buildings collapse regularly in Nigeria because of endemic corruption with contractors using sub-standard materials and bribing inspectors to ignore shoddy work or a lack of building permits.

In 2014, 116 people died when a multi-story guesthouse of the Synagogue Church of All Nations collapsed in Lagos, Nigeria's commercial capital. Most victims were visiting South African followers of the megachurch's influential founder T. B. Joshua.

Two structural engineers, Joshua and church trustees have been accused of criminal negligence and involuntary manslaughter after a coroner found the building collapsed from structural failures caused by design and detailing errors.

But Lagos state government efforts to bring them to court have been foiled by repeated legal challenges that have delayed a trial.

President Muhammadu Buhari expressed his condolences, telling "the Governor and the People of Akwa Ibom State, the deep sorrow of his family, the government and the entire people of Nigeria over the many deaths and injury recorded following the incident", presidential spokesman Garba Shehu said in a statement.