The plane crashed shortly after takeoff, killing all 157 people thought to be on board. 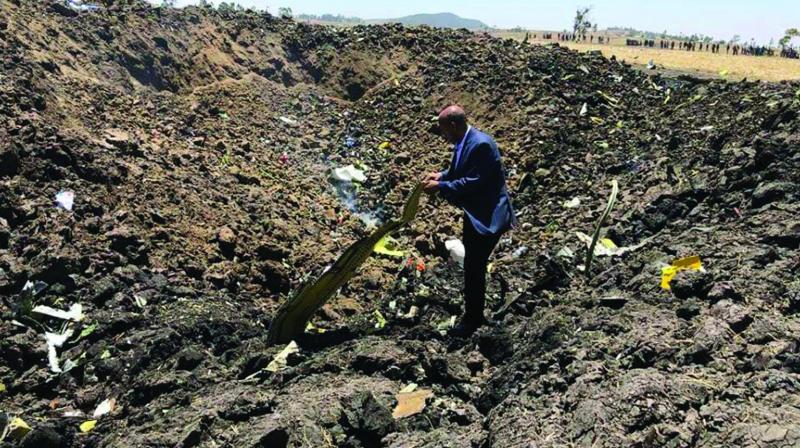 CEO of Ethiopian Airlines Tewolde Gebremariam looks at the wreckage of the plane that crashed shortly after takeoff from Addis Ababa, Ethiopia. (Photo: AP)

Bishoftu: A Nairobi-bound Boeing 737 crashed six minutes after an early-morning takeoff from Addis Ababa on Sunday, killing all 149 passengers, including four Indians, and eight crew on board, Ethiopian Airlines said.

Four Indians, including a UN consultant attached with the environment ministry, were among those killed when a Nairobi-bound Ethiopian Airlines plane crashed after taking-off from Addis Ababa, External Affairs Minister Sushma Swaraj said Sunday.

The Boeing 737 crashed minutes after an early-morning takeoff from Addis Ababa, killing all eight crew and 149 passengers on board, including  tourists, business travellers, and the United Nations Development Programme consultant attached with the environment ministry, Shikha Garg, who was on her way to attend a United Nations Environment Programme  meeting.

People holding passports from 32 countries and the UN were on board the plane which ploughed into a field just 60 km southeast of Addis Ababa, the carrier’s CEO Tewolde GebreMariam told journalists in the capital, lamenting this “very sad and tragic day.”

The crash came on the eve of a major, annual assembly in Nairobi of the UN Environment Prog-ramme, which learnt of the crash with “deep regret” but did not say whether any delegates were on the plane. “We can only hope that she is not on that flight,” Peter Kimani, who had come to fetch his sister at Nairobi’s Jomo Kenyatta International Airport (JKIA), said shortly after news of the crash reached those waiting in the arrivals hall.

State-owned Ethiopian Airlines, Africa’s largest carrier, said the ill-fated Boeing 737-800MAX had taken off at 8:38 am (local time) from Bole International Airport and “lost contact” six minutes later. Scheduled to land in Nairobi at 10.25 am (0725 GMT), it came down instead near the village of Tulu Fara outside Bishoftu. There was a massive crater at the crash site, with belongings and airplane parts scattered widely. Rescue crews were retrieving human remains from the wreckage. Ethiopian Airlines confirmed “there are no survivors.”

Ethiopian Airlines said Kenya had the largest number of casualties with 32, followed by Canada with 18, Ethiopia with nine, then Italy, China, and the US with eight each. Britain and France each had seven people on board, Egypt six, the Netherlands five and India four. Four were UN passport-holders. Eleven countries in Africa, and 13 in Europe had citizens among the victims.