World   Africa  07 Aug 2020  You have to attend all-night lectures if you break COVID rules in Rwanda
World, Africa

Every evening, public health messages are blared through loudspeakers to spectators seated at least a metre apart in the stadiums 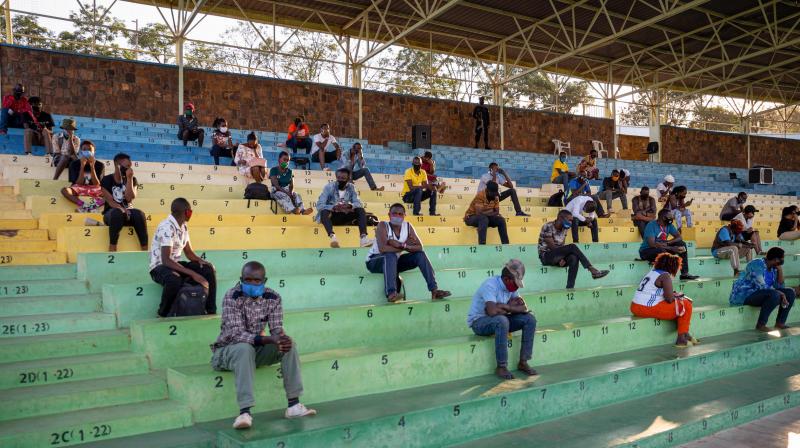 People who did not respect the measures to prevent the spread of the COVID-19 (novel coronavirus) pandemic, such as the correct wearing of masks in public places, are forced to sit and listen the prevention speeches for a few hours in Nyamirambo stadium in Kigali, Rwanda. (AFP)

Kigali: Rwandans caught breaking curfew or not wearing masks are being sent to stadiums in droves for all-night lectures on the dangers of coronavirus, as the country maintains a tough approach to stem its spread.

Since mid-July, official figures show that about 70,000 people accused of ignoring the 9:00 pm curfew or rules on mandatory face masks have been ordered by police to sit through hours of speeches at local arenas or detention centres.

Every evening, in stadiums across Rwanda, public health messaging is blared through loudspeakers to spectators seated at least a metre apart in the stands, imploring them to be ambassadors in the fight against the new virus.

The sessions -- conducted under the watch of armed guards -- wrap up around dawn, when those attending are sent home with strict orders to self-quarantine.

Jado son Nizeyimana said he was stopped by police for wearing his mask incorrectly and was told to report to the nearest stadium.

Hundreds have been corralled into classes at arenas across the country, including the national stadium in Kigali.

The press is often invited to attend so that images broadcast of those being reprimanded might dissuade others from ignoring the regulations.

Police, meanwhile, have taken to informing bosses of their employees' transgressions.

Others were given a choice: they could avoid public admonishment if they paid a fine of 25,000 Rwandan francs ($26/22 euros), well out of reach for many in a country where a waiter earns as little as $60 a month.

"I was arrested twice, and spent the night at the stadium on both occasions. Both times I was caught after curfew. The alternative was to pay a heavy fine, but I don't have any money. I am looking for a job," said 25-year-old Elly Niganze.

As of Thursday, Rwanda had recorded five deaths and just over 2,000 cases of COVID-19, the disease caused by the coronavirus, with less than 900 active infections in the nation of 12.5 million.

Meanwhile testing for the illness -- at above 280,000 -- puts Rwanda among the better achievers on the continent.

Police say the heavy-handed approach plays a part in curbing the spread of the virus.

"We're still finding many people breaking the rules, all the time. It's as if some are doing it intentionally to frustrate police. I want to tell you it will not happen," police spokesman John Bosco Kabera told reporters.

"We have started communicating with institutions and employers of people who have been arrested to take measures and ensure that they are self-isolated once they are released."

Rights groups have accused police and soldiers of using the pandemic and strict rules for curbing the disease as cover to perpetrate abuses against the public and target critics.

Journalists and bloggers deemed critical of Rwanda's effort to tackle the pandemic have faced lengthy detention periods and serious charges including rebelling against the state, an offence which carries a one-year jail term.

Dieudonne Niyonsenga, a prominent blogger, was arrested in April while trying to report on how the shutdown had impacted Rwanda's poorest.

Prior to his arrest, he had been investigating allegations of rape by soldiers during the curfew period. He is now being prosecuted for identity theft, fraud and rebellion.

New York-based watchdog Human Rights Watch (HRW) has called for a transparent inquiry into allegations of killings, rapes and other serious crimes by Rwanda's security forces during the country's lockdown.