Rabindranath Tagore was the first non-European to win this prestigious award, in recognition for his collection of poems, 'Gitanjali'. 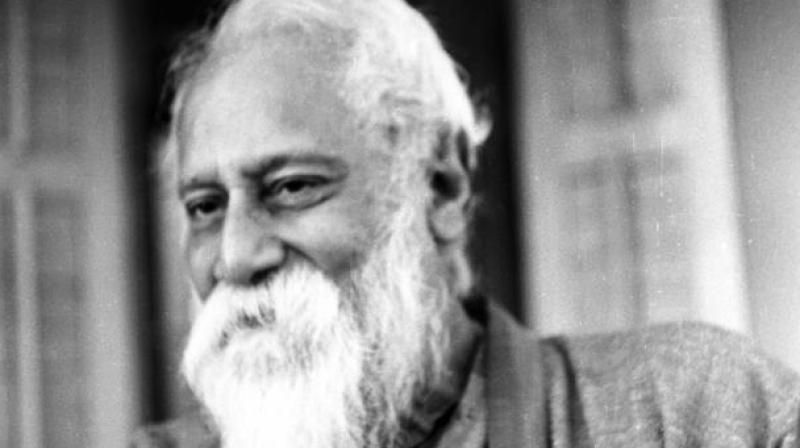 Tagore visited Egypt as a young adolescent in 1878 and later as a famous poet-philosopher in 1926, when he met King Fouad and interacted with scholars in Alexandria and Cairo. (Photo: AFP)

Cairo: India will organise a cultural festival in Egypt to mark the 156th birth anniversary of the famous Indian poet, Rabindranath Tagore.

Tagore Festival which is being organised by the Maulana Azad Centre for Indian Culture (MACIC), the cultural wing of the Indian Embassy in Cairo, from May 8-12 will feature a dance show, film screening, a play and painting competition.

On May 8, the movie 'Kabuliwala' directed by Hemen Gupta will be screened at the Hanager Cinema, Opera House Complex. The movie is based on a novel written by Tagore about an immigrant from Kabul who forms a bond with a young girl in India who reminds him of his daughter in Afghanistan.

A dance drama based on Tagore's work called 'Chitrangada' will be presented by Dancers' Guild. Chitrangada is the warrior princess in the ancient Indian epic, Mahabharata. Dancers' Guild is a well-known dance company based in Kolkata in the Indian state of West Bengal.

'Chitrangada' will be performed at the Sayed Darwish Theatre in Alexandria on May 9 and at the Arab Music Institute in Cairo on May 11. The festival will conclude on May 12 with 'Rituranga Play of Seasons' which will be performed by members of the
Indian community at the Hanager Theatre, Opera House Complex at 7:30 pm.

The Embassy is also organising a painting/drawing competition for the Indian community children on May 12. Rabindranath Tagore received the Nobel Prize for Literature in 1913. He was the first non-European to win this prestigious award, in recognition for his collection of poems, 'Gitanjali'. His poetry, novels, plays, short stories and essays are widely read in India and across the world.

His songs have been set to music, his plays have been enacted as dance drama and his novels have been filmed. He is an integral part of India's literary heritage and a towering figure in Bengali literature who continues to inspire creativity even in the contemporary world.

Tagore is not unknown to Egypt. He visited Egypt as a young adolescent in 1878 and later as a famous poet-philosopher in 1926, when he met King Fouad and interacted with scholars in Alexandria and Cairo. His friendship with Egyptian poet Ahmed Shawki is well known and he wrote a moving eulogy on his friend's death in 1932.

He was impressed by the strong literary trends and found great resonance in the intellectual movement in Egypt. He also wrote about the beautiful relationship between the noble Nile River and the flourishing civilisation of Egyptians.

The Tagore Festival is organised in cooperation with the Egyptian Ministry of Culture, Cairo Opera House, Cultural Production Sector, Dancers Guild and the Indian Community Association in Egypt.