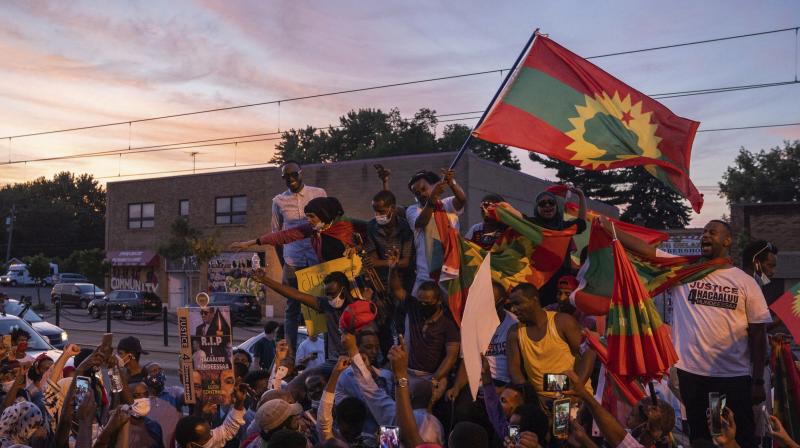 Members of the Oromo community stop during a protest on University Avenue in St. Paul, Minn., to sing a song by Hachalu Hundessa. (AP)

Legetafo: Firaol Ajema and his friends, dressed in black T-shirts, have been meeting each afternoon in recent days to listen to the music of Ethiopian pop star Hachalu Hundessa.

The homemade shirts bearing the dead singer's portrait and the slogan "I am also Hachalu" are their way of honouring the man whose murder Monday sparked violence that killed nearly 100 and highlighted Ethiopia's simmering ethnic tensions.

"We haven't been able to properly mourn," said Firaol, a university student in the town of Legetafo outside Addis Ababa, where security has been tight since the killing. "We are suffocating inside our own houses."

Hachalu's death, which remains unsolved, was destined to become a political flashpoint.

His music was the soundtrack to anti-government protests that swept Prime Minister Abiy Ahmed, the country's first Oromo leader, to office in 2018.

Yet, as Ethiopia prepares for elections that will test its democratic transition under Abiy, many Oromo nationalists feel betrayed, arguing the prime minister has failed to champion their interests.

Opposition politicians claim many of the protester deaths were instigated by security forces who have fired on protesters in multiple locations in Addis Ababa and the surrounding Oromia region.

Firaol and his fellow young Oromos in Legetafo agree. "The killing has caused a lot of sadness among us, but the way the government is handling it is even worse," said Birhanu Gadisa, also a student. "It's totally unacceptable."

The issue at the centre of this week's crisis is the historic Oromo claim to Addis Ababa, which many ethnic nationalists refer to as Finfinne, the name given to the territory before Emperor Menelik II founded the capital in the late 19th century.

The catalyst for protests that swept Abiy to power was the unveiling in 2015 of a master plan for Addis Ababa's expansion into Oromia.

Hachalu's resting place has been contested with some arguing he should be buried in Addis Ababa, rather than his native Ambo to the west.

"He needed to be buried with respect inside Addis Ababa. Finfinne belongs to the Oromo people," Firaol said.

Government officials and some of Hachalu's relatives, however, wanted him buried in Ambo, leading to an unseemly tussle over his corpse.

According to an account provided by federal police commissioner Endeshaw Tassew, a group of Oromo nationalists, among them prominent opposition politician Jawar Mohammed, intercepted the body en route to Ambo on Tuesday and tried to take it back to Addis Ababa, where they clashed with security forces.

One police officer was killed and Jawar was arrested, further inflaming tensions in Oromia.

Two days later the funeral in Ambo turned deadly when soldiers opened fire on crowds of mourners in a botched attempt at crowd control.

At least nine people were shot, two of them fatally, triggering fresh grief for Hachalu's fans.

"Even when many people go out to mourn his death, we lost more lives," said student Chala Tola.

Eyes of the Oromo

Hachalu is now buried, but the divisions his killing has exposed will shape Ethiopian politics in the months to come.

Jawar remains jailed, alongside another prominent Oromo politician, Bekele Gerba. Officials have provided scant information about the charges against the two men who are due to appear in court this month.

And, as Hachalu made clear in one of his final interviews, Oromo nationalists' grievances are deeper than recent events. Last month the singer called for the removal of a statue of Emperor Menelik II from the capital's Piasa neighbourhood.

While Menelik is widely respected as the creator of modern-day Ethiopia, for Oromo nationalists he embodies a system of marginalisation.

During this week's protests a crowd advanced on the statue, seemingly intent on toppling it to make Hachalu's wish a reality, but security forces pushed them back. City police officers have been stationed around the statue since.

For Firaol, back in Legetafo, that Hachalu is dead and the statue stands says everything he needs to know about the government's priorities.