WHO has clarified that the herbal tea's effects had not been tested, and there are no published scientific studies of the potion 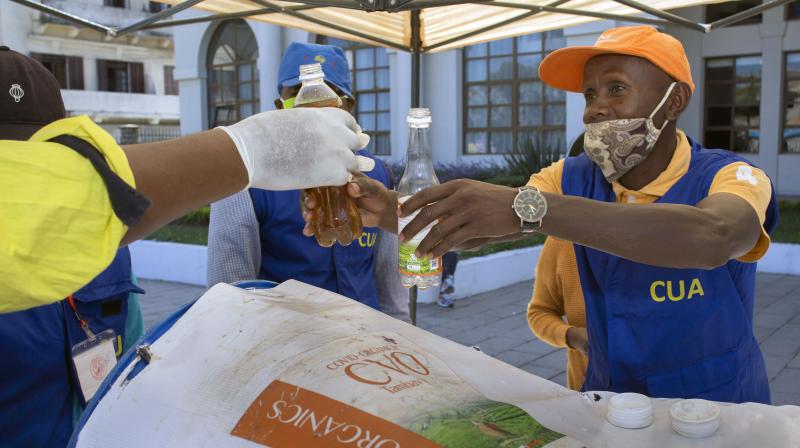 A man gets his bottle filled with a herbal extract believed to protect from COVID-19, in Antananarivo, Madagascar. (AP)

Bissau: Madagascar on Saturday delivered to Guinea-Bissau a shipment of a herbal tea that president Andry Rajoelina has touted as a powerful remedy against the novel coronavirus and hopes to distribute across West Africa and beyond.

Baptised Covid-Organics, the drink is derived from artemisia -- a plant with proven efficacy in malaria treatment -- and other indigenous herbs.

Guinea-Bissau's self-proclaimed president Umaro Sissoco Embalo was at the airport to oversee reception of the cargo donated by Madagascar.

After Equatorial Guinea on Thursday, Guinea-Bissau is the second country to take delivery of the potion that Madagascar claims cures COVID-19 patients within 10 days.

The World Health Organization has said that the herbal tea's effects had not been tested, and there are no published scientific studies of the potion.

Embalo's chief of staff Califa Soares Cassama told reporters that part of Saturday's shipment was to be passed along to the other 14 members of the Economic Community of West African States (ECOWAS).

Rajoelina had on Friday thanked Embalo for taking charge of the distribution in West Africa.

There was no indication of how Guinea-Bissau, poor even by African standards and chronically unstable politically, would handle the required logistics.

The country of 1.8 million has reported 200 coronavirus cases, including prime minister Nuno Gomes Nabiam and four other cabinet members, and one virus death.

Embalo has said that he will test the potion from Madagascar on leading government members, including the premier.

Equatorial Guinea meanwhile announced that it will distribute the potion to infected people in hospitals during two weeks and, in its preventative version, to everybody else.

Back in Madagascar, unarmed soldiers have been going door to door in the capital Antananarivo handing out Covid-Organics.

When launching the distribution last month, Rajoelina said two people had already been cured thanks to the potion, and added: "We can change the history of the entire world."

There is currently no scientifically proven cure for coronavirus, which has killed more than 240,000 people worldwide according to official figures compiled by AFP.