The 2 bombers infiltrated building in central Tripoli, fired on people inside and detonated their explosives when their ammunition ran out. 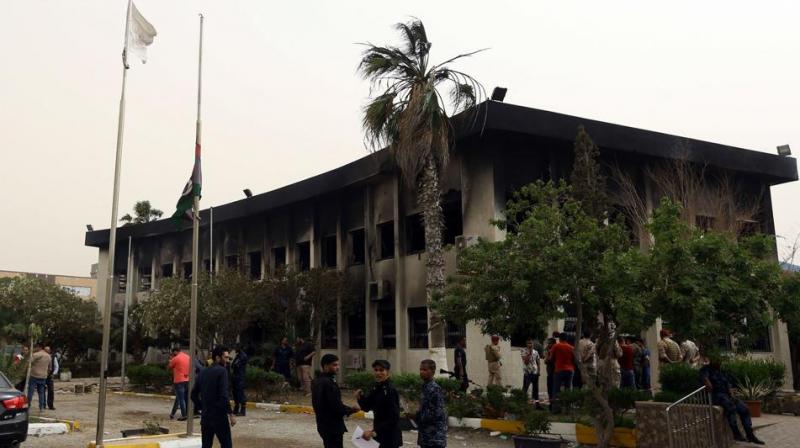 Libyan policemen check the damage at the Libyan electoral commission headquarters in the capital, Tripoli, after it was targeted by suicide bombers on May 2, 2018. (Photo: AFP)

Benghazi: Islamic State suicide bombers attacked Libya’s election commission in the capital on Wednesday, killing at least 14 people in the worst such attack in years that aimed to disrupt a nation-wide vote planned for later this year.

The two bombers infiltrated the building in central Tripoli and fired on people inside, then detonated their explosives when their ammunition ran out, IS said in a statement circulated by its affiliated Amaq news agency. The Health Ministry earlier said the attack also set fire to the building, which could be seen in online videos showing thick black smoke billowing upward and security forces engaging in a gun battle.

IS and other Islamic extremists in Libya oppose democratic elections, which the United Nations and Libya’s foreign backers are urging to take place in 2018 despite security problems in the oil-rich North African country. Militants have often targeted elections in other countries, and IS has called for attacks on voting infrastructure in Libya.

“(It) is a clear manifestation of everything that is wrong with the current short-sighted narrative of fake security and ‘progress,” said Hanan Salah of Human Rights Watch in a post on social media. Her group has underlined how elections will be difficult while Libya remains dominated by a patchwork of armed groups who continue extra-judicial killings, property confiscation, forced disappearances, arbitrary detention and torture.

Foreign embassies, observers and other institutions promptly condemned the attack as an attempt to undermine stability in Libya as it heads toward the general election later this year. The UN mission to Libya said that violence “will not deter Libyans from moving forward in the process of establishing national unity and the rule of law and institutions.”

Libya was plunged into chaos following the 2011 uprising that toppled and killed Moammar Gadhafi, and is now split between rival governments, each backed by an array of militias. A UN-backed government is based in Tripoli, which in recent years hasn’t seen such brazen attacks.

US State Department spokesperson Heather Nauert condemned the attack in a statement and said the US is committed to working with the Government of National Accord to deny IS “safe haven in their country.”

“This terrorist attack against a key pillar of Libya’s fragile democracy only deepens the United States’ commitment to support all Libyans as they prepare for credible and secure elections,” she said.

Earlier this week, the international Quartet trying to help bring order to Libya said it supports holding presidential and parliamentary elections this year, and will provide observers and electoral assistance to ensure the voting is free and fair.

In a joint statement following a meeting in Cairo on Monday, the European Union, the African Union, the Arab League and the United Nations said Libyans must commit in advance to respect and abide by the results and avoid violence or intimidation.

The election commission said later in the day that its electoral database was safe after the attack, dispelling rumours that it had been specifically targeted and damaged. In a statement it said that it remained committed to and ready to hold the elections this year.

The United Nations and various envoys to Libya have praised recent efforts to register millions of Libyan voters, underlining how the move constitutes progress despite the country’s myriad troubles and overarching lack of security amid militia impunity and general lawlessness.