If you catch COVID-19 at a Tump rally, it's on you 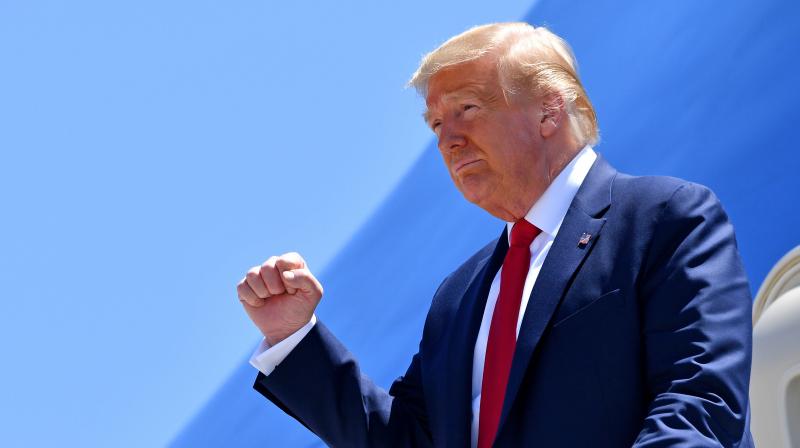 US President Donald Trump pumps his fist as he steps off Air Force One upon arrival in Dallas, Texas. (AFP)

Washington: Donald Trump supporters who attend the US president's upcoming election rally must sign a waiver promising not to sue if they catch COVID-19 at the event, according to his campaign website.

The Republican billionaire announced on Wednesday that he would resume his campaign rallies in four states -- Oklahoma, Florida, Arizona and North Carolina -- despite the coronavirus pandemic that continues to rage in the US.

More than 113,000 people have died in the country of COVID-19, the disease caused by the new coronavirus, while more than two million cases have been recorded.

In Florida, Arizona and North Carolina, the number of infections has even started to rise again.

Trump supporters must sign a waiver on his campaign website to register for the first of the rallies, in Tulsa, Oklahoma, on June 19.

"By clicking register below, you are acknowledging that an inherent risk of exposure to COVID-19 exists in any public place where people are present," the waiver states.

"By attending the Rally, you and any guests voluntarily assume all risks related to exposure to COVID-19 and agree not to hold" the Trump campaign, or any of its affiliates, contractors or employees responsible, it continues.

The page makes no mention of other measures to control spread of the virus, such as wearing masks.

The Tulsa rally has already ignited controversy as America grapples with weeks of unrest and protests against racism and police brutality following the killing of an African-American man, George Floyd, while in police custody in Minneapolis on May 25.

Tulsa was the site of a racist massacre in 1921 when a mob of whites killed hundreds of African Americans in a thriving black neighborhood in the city, while June 19 -- "Juneteenth" -- marks "Freedom Day" celebrating the abolition of slavery in Texas on June 19, 1865.

California senator Kamala Harris, whose name is among those being touted as a possible running mate for Democratic presidential candidate Joe Biden in November, slammed the rally as a "welcome home party" for white supremacists.

The White House responded Thursday, saying Juneteenth was a "meaningful day" for Trump and that he wanted to use the occasion to share the progress made for black Americans.

Biden has not yet announced a resumption of campaign rallies.