31 Oct 2022  Diwali in Bangkok a draw for politicians
Life, Travel 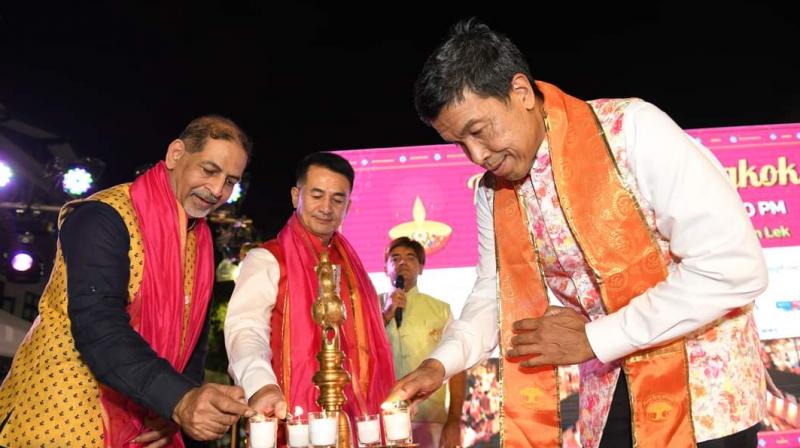 Deepavali was a mega-event in Bangkok this year, with three days of high celebrations on the streets of Pahurat, the Indian quarter of the city. The celebrations were attended by no other than the dynamic new Bangkok governor Chadchart Sittipunt. An engineering academic who studied at the prestigious MIT in the US, Sittipunt had won by a landslide victory as an Independent candidate, defeating his seasoned rivals. Ever since his win, he has taken the city by storm with his many dynamic plans to improve its image. Colourful Bangkok aims to fill all public spaces with cultural activities, of which Pahurat is a part.

“Everyone knows of Yaowarat, the Chinese quarter of Bangkok. Let’s now promote the Indian quarter,” Sittipunt told this writer, when we met at an art event in the city, where he personally took photographs of the local artistes with his mobile phone and posted them on his Facebook page. Sittipunt is known for using social media extensively for promoting his programmes.

Little India will be the new name of Pahurat, said the governor, and it truly came into its own during the three-day Deepavali festival. The whole area was festooned with banners, electric lights and lamps, and had stalls selling numerous Indian products and recipes. The khlong (canal) on the side was lit up, and with the governor’s desire to promote it for tourism, has already been earmarked by various tourism companies for kayaking packages.

The walls on the sides of the canal have got magnificient graffiti-images of India. This section has been named Khlong Ong Art.

For the festival, there were two mandaps, one for the puja, set up by VHP, Satya Sai Foundation, among others, and another for a bevy of entertainment acts, including classical and Bollywood dances, DJ and dance music and a fashion show.

“We have been trying for seven years to work with the Bangkok administration and this is the first time they have responded,” said Chuan Thakur, president of the Indian Association of Thailand, one of the main organisers. He was disappointed that none of the big Indian companies had come forward as sponsors, but hoped for their support to do a bigger  show, next year.

The BMA (Bangkok Metropolitan Authority) did not support the festival with money, but helped clear the lane for hosting the event and also publishes information about it on its website. That’s why the Indian organisers held a press conference for the Thai media, where they were asked numerous questions about Deepavali.

Thakur informed us that the Bangkok governor had recently addressed the Indo-Thai Chamber of Commerce where he had invited ideas for the celebrations.

At the Deepavali festival, Sittipunt and the deputy governor, Sanon Wangsrangboon, wore Indian waistcoats of silk and offered prayers at the mandap, where the deities of Lakshmi and Ganesh were installed, and after that, they walked the long route to the culture mandap, while surrounded by hordes of Indian admirers.

They stayed for the entire cultural programme, with Sittipunt even posing for pictures with the artistes.

The governor told this writer at the event, that though he did not know much about Deepavali myths and folklore, he was impressed by the colourful celebrations.

“We should make it an annual event in Little India,” he said.

Judging by the high quality of the cultural entertainment, it looked like it could be the start of many Indian programmes in the area. It was also good to see Thai classical dances performed alongside Indian ones.

“We want to highlight the close connection between the two communities,” said Thakur, a real estate developer who moved to Bangkok in the 1970s.

It was impressive to see the large number of Thais partaking in the festival, dressed in ethnic Indian clothes and jewellery. They particularly loved the religious ceremonies with pandits, prayers, bhajans, et al.

“The Indian gods are very popular with Thais,” said Susheel Kumar Saraff, a jewellery magnate and president of VHP Thailand.

“This year’s Deepavali was a vastly delightful experience, as it was celebrated among both the Indian and Thai communities with great cooperation and enthusiasm,” stated Sunil Kothari, a noted industrialist and philanthropist, and one of the sponsors of the festival. He hoped this link with the Bangkok government would lead to more business opportunities.

The Bangkok governor said in his speech that he hoped Little India would throb with “good business” during the three-day festival. “The BMA is only a facilitator. It’s the Indian community who have organised this event, which will help all the local businesses in the area,” he stated.

Judging by the packed stalls and restaurants in Pahurat, it was good business indeed, especially as visitors included Thai citizens and foreign tourists.

Apart from a large entourage of the Bangkok governor, other politicians also attended. Among them was tourism and sports minister Phiphat Ratchakitprakarn, who checked out the gurdwara. Also present were Sudarat Keyuraphan from the Thai Sang Thai party and Paetongtarn Shinawatra, youngest daughter of the former Thai Prime Minister Thaksin Shinawatra, now in exile. She has been named the prime ministerial candidate of her Pheu Thai Party at next year’s general elections.

All the Thai politicians wore Indian clothes, and prayed at the puja mandap, with the women enjoying the shops, and especially the henna counter. All of them brought their media teams along, which was why the Deepavali celebrations got huge media coverage in the Thai press this year.

While this was good promotion for the Indian festival, one also wondered whether the presence of the politicians had something to do with the forthcoming general elections in Thailand next year. After all, the Indian community in Thailand is sizeable and strong, numbering 100,000 in total, with 25,000 Indian nationals.

Rajesh Kumar, a digital media influencer, stated that his popular Facebook group, Indians in Thailand, was crammed with Deepavali pictures and posts.

It looks like Diwali will become a flagship festival for Indians in Thailand, just like in Singapore and Malaysia. With the current Bangkok governor’s love for cultural diversity, there's a strong chance for more Indian festivals to be celebrated in Little India.