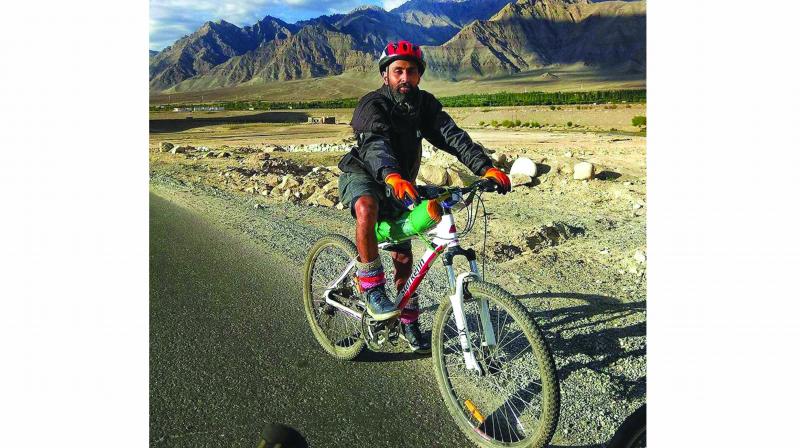 Here, I have many varieties of apples along with many vegetables and cattle and even a horse – Babu Sager

In the late 1990s, Babu Sager, a teenager, ran his fingers through a magazine and found out what it feels like to travel through Ladakh. At a time when backpackers and wanderers hardly existed in our part of the world, this young man from Koilandy district in Kozhikode started his first trip towards Ladakh. Skipping the last hour of lecture in his college at Bangalore, Babu packed his bags and took off on his Yamaha RX 100 bike for a trip that would last two months and change the course of his life. When he returned, his father, who was a doctor, was reluctant to send him back to college fearing his son's love for roads. So he sent him to Russia instead to pursue a graduation in medicine. But he was smiiten by Ladakh.

During his eight years in Saint Petersburg, Babu used to visit Kullu, Manali and Vashisht and other places in Himachal, without letting his family know. “I would tell them that I am going on a European trip as part of my studies and pack my bags to visit Himachal Pradesh.”

But during a trip, the weather was bad, he got stuck in Vashisht. He had to stay back for a few days at a farmhouse. Babu was amused when he stepped into the farmhouse and the acres of farm around it. While leaving, he thought of coming back and staying for as long as he could. But his family was not ready to let him go. Family life and passion don't go hand in hand, sometimes, according to Babu. With a degree in medicine, everyone expected him to join as a doctor and follow his family's tradition. “They were very strict and there were too many examples in front of me. Most of my family members were doctors and I was not given any choice. But with a certificate of medicine in my hand, I decided to become a farmer.”

“At first it was not easy and my first venture was a restaurant. Babushka (babushka means grandmother in Russian) was a small restaurant,” he says. The tricks he learned from Russia helped him in the business. But Babu was always thinking about his time at the farm. In a few years' time, he bought that farmhouse and the 13 acres of the farm. But he retained the small restaurant and it still exists in Manali.

Babu's farm is built on the idea of organic and permaculture farming. “Here, I have many varieties of apples along with many vegetables and cattle and even a horse. I don't use any other fertilizer other than cow dung. Though I have some cows at my farm, I don't rely on them heavily. I used to give the grass from my farm to local residents and in return, they would give me enough cow dung for my farm. There is a barter system going on here. They really know me since I have been here for many years and I have my 13 helpers who all are from Nepal.”

Since his Babushka Permaculture Farmhouse has got enough attention, local and foreign travellers started to roll in and work with him on the farm during their stay. “They can stay here as long as they wish to work with me and in return, they have to pay a certain amount. That's how it works. Foreigners are coming here every year. They pay me well and work in my farm,” smiles Babu.

As a service, he offers stay for bikers and trekkers going to Manali. “I am a member of a Facebook page for travellers. Whenever any Malayali travellers pass this way, I offer free stay and food to them,” he says.

His cottage even has a signboard in Malayalam that reads Kerivada Makkale (means Come in, Children, the famous dialogue from the 1991 hit Malayalam movie Godfather). Babukka and his beloved pet dog Shade welcome them with open arms. His farmhouse provides a leisure package that offers yoga classes, trekking, cooking classes and many more.

Babu says he has no regrets in life. When he followed his dream by quitting his job, many named him crazy and now, the same people call him a ‘successful man’.

Babu is now busy expanding his cottages in Vashisht by building new bamboo huts and artificial caves in his farmhouse. But ultimately, he is a traveller, philosopher and a kind-hearted human.