There is similar or sometimes more risk involved in climbing other peaks that exist in the Himalayas. 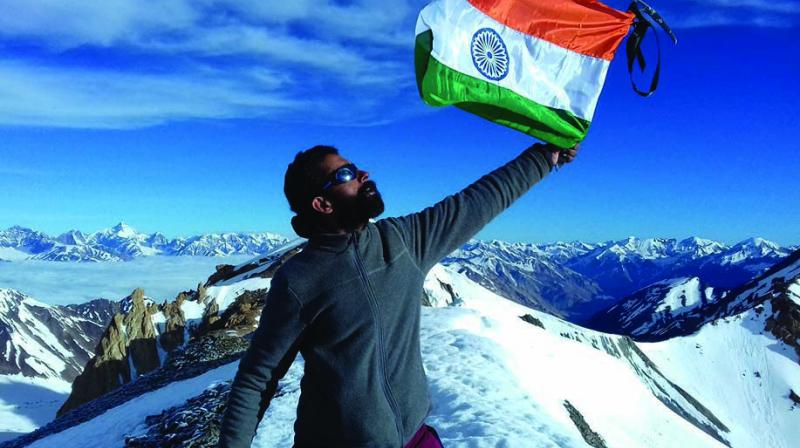 After listening to Preetham Menon’s adventurous stories of climbing mountains that are technically difficult and not-so-frequently attempted my many, one would feel that Mount Everest is not the one and only difficult peak in the world. There is similar or sometimes more risk involved in climbing other peaks that exist in the Himalayas. As the mountaineer from Thrissur, who has been climbing Himalayan peaks for over 13 years, puts it, “Everest has been climbed many times before and any mountaineer worth his salt aims to climb those peaks which have not been climbed before, for the challenges posed by the technical difficulty and the approach — regardless of the height.”

For Preetham, mountaineering started as an escape from the daily trudge of existence and soon it became a passion, so much so that it persuaded him to quit his 17-year-long career in sales and marketing. After climbing various peaks in the Himalayas, Preetham this time climbed the not-so-explored Mt. Lagborche. Ask him to share his thoughts on conquering yet another peak and give a sneak peek into the real adventure associated with the expeditions, he says, “One can never conquer mountains because I feel that they are one of the most powerful forces that exist; you can only prepare and adapt.  They might look good in pictures; however, the reality is that mountain wilderness is extremely inhospitable because when you climb peaks of over 20,000 ft, the altitude, lack of oxygen and the lack of atmospheric pressure put tremendous physiological pressures on the human body. Under these pressures, the body is susceptible to breakdown and numerous illnesses. Moreover, working in snow and icy conditions is a huge challenge. One of the most important factors that makes mountaineering such a difficult and adventurous sport is, it requires the knowledge on using specialised equipment to climb steep rock and icy terrains and the ability to carry huge loads of weight in your rucksack over difficult terrain.”

The mountaineer, who is also one of the partners of an organisation that conducts high altitude climbs and adventure training programmes, completed the Mt. Lagborche expedition with a team of six including him, under the banner of Youth Mountaineers Cultural Association, Naihati (YMCA). Preetham adds that the expedition was one of the toughest as it is an isolated mountain and reaching the base camp itself was a perilous task. “Mt. Lagborche is situated in the Spitti valley of Himachal Pradesh and the nearest road head is a mountainous village named Losar, which is an eight-hour drive away from Manali, through mountainous off trail roads. Our team, Rajat Thakur, Ravi Thakur, Swarup Mandal, Abheek, Subhodeep Saha and myself, established three camps in order to reach the summit. Our summit camp was on an ice glacier, from where we climbed a steep ice wall to reach the shoulder ridge of the peak and found our way to the summit. On the day of reaching the summit, we started climbing at 2am in the biting cold and reached there around 7am,” he says, adding that they generally climb during night despite the harsh weather conditions to avoid dangers like avalanches and open crevasses.

Though Preetham sounds content, the vigour and enthusiasm to climb more difficult mountains are clear from his attitude. The mountaineer attributes it to the mountains that made him realise how small we are and how minor our existential problems are. He adds, “The moment when we unfurled the Tri-Colour on the summit of Mt.Lagborche, by risking our lives to climb the ice wall and crossing the summit ridge, it felt as if life truly has a purpose.”

He is now pursuing his passion and is also making a living out of it, taking people up the mountains, organising training programmes intended to impart essential life skills to those attempting adventure sports.