Vivo U10 review: A complete package under 10k

The Vivo U10 ticks all the boxes, and then some more when it comes to budget phones. 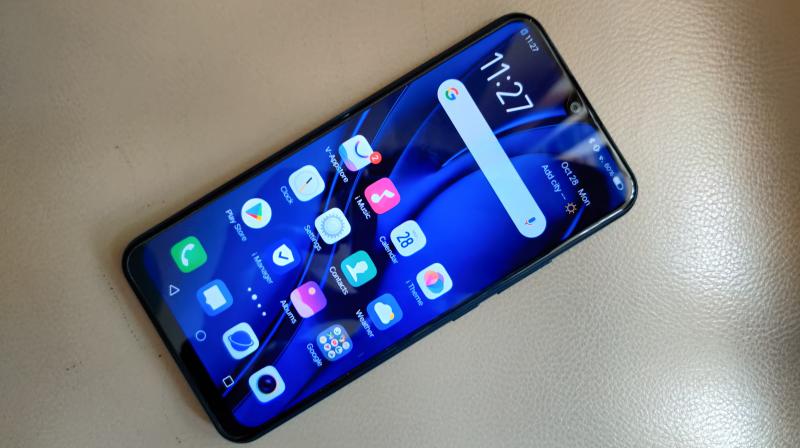 There is a 6.35-inch display on the front of teh Vivo U10 with a dew-drop notch on the top.
Rating:

Vivo U10 review: The complete package under 10k

The trend in cheaper phones getting good, and good phones getting cheaper is no joke. This is evident clearly in consumer markets like India, where consumers are demanding, and the competition is cutthroat. But apart from the battle for unifying the mid-range and flagship segments, brands are also going all out in throwing out the best budget phones.

Phones below the 13k-15k mid-range bar are some of the best sellers in the country and things in the area have never been better. Features like triple-camera setups, a USB-C slot, fast charging, a large battery and a Snapdragon 600 series processor would have made you think “This has got to be a mid-range phone, probably costing around 15,000” not many months ago. However, these perks have now trickled down to the absolute budget segment and a prime example of that is the recently launched Vivo U10. A smartphone that starts at Rs 8,990 and screams ‘Value for Money’.

Sure it sounds pretty utopian, but how well does the U10 fare in the real world in the hands of merciless Indian customers? We review the Vivo U10 to find out.

The design and build quality is usually the first element to be thrown under the bus when phones in this segment get more features. However, this isn’t the case with the Vivo U10, which is a well build phone throughout. There is a plastic back that looks great but doesn’t appear very convincing in terms of durability; however, getting the job done without creaking in the corners. There is an aluminium frame that makes the phone feel very solid and accidental drops will be less likely to put a dent in the corners. 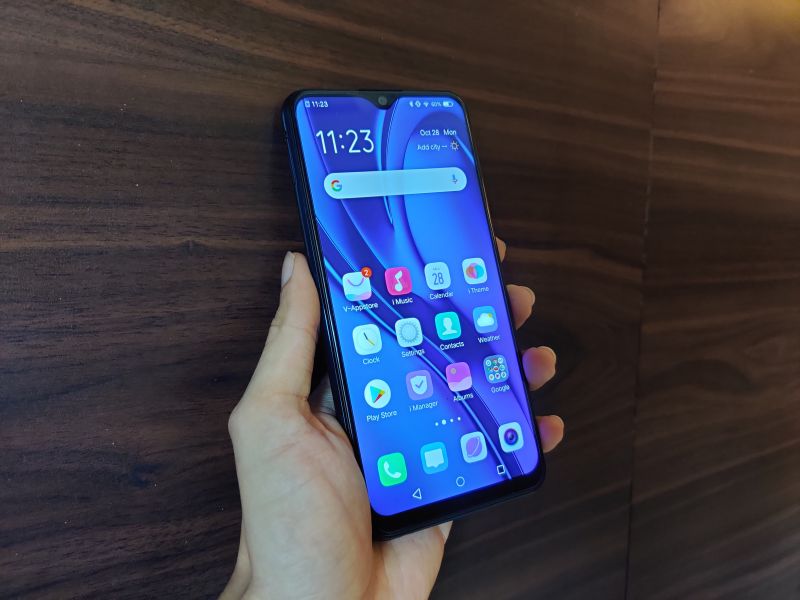 The phone feels somewhat thick at 8.9mm, and also heavy at 190 grams. This can be attributed to the large battery inside the device. There is a 6.35-inch display on the front with a dew-drop notch on the top. The back of the phone features the triple camera setup on the top left, with a slight protrusion. There is a fingerprint reader in the middle-upper half and the company’s branding on the lower half of the phone. There is a unique gradient finish on the back that looks textures but feels smooth. 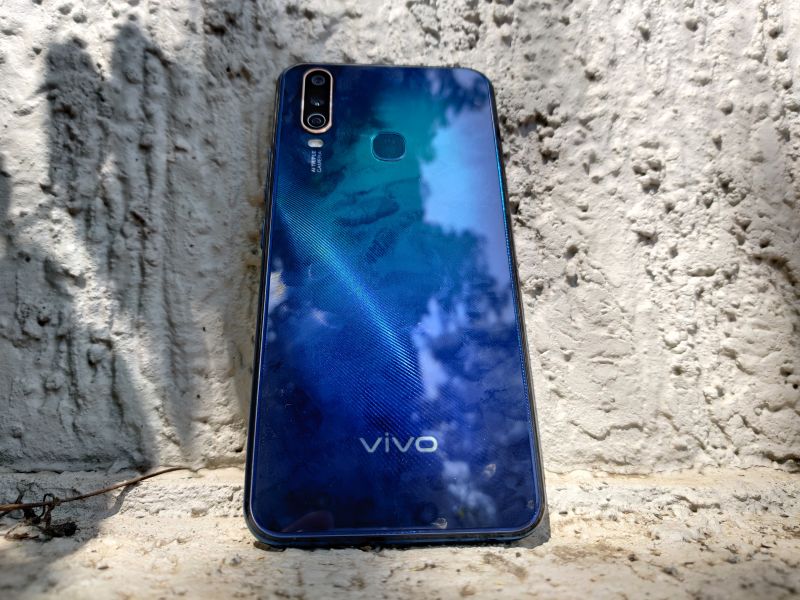 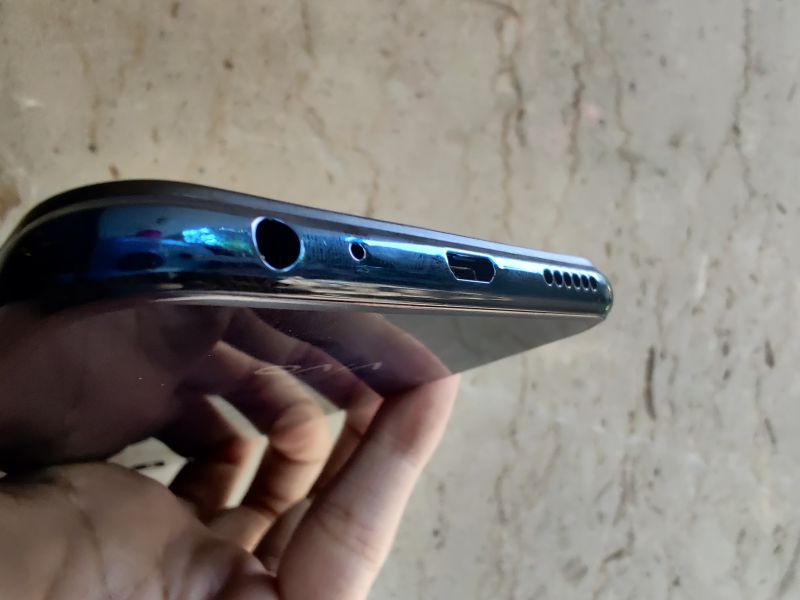 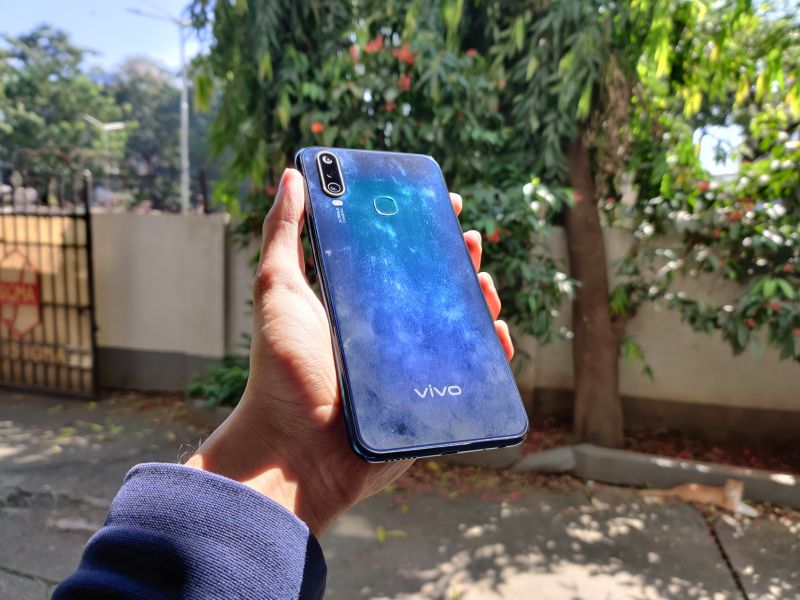 The left edge of the phone carries only the SIM slot, which carries two Nano SIMs and has a dedicated SD card slot too. The right edge of the phone has the power button in the middle and the volume keys above it. The top edge goes completely clean and the bottom edge features a 3.5mm headphone jack, a microphone, the speaker grille, and surprisingly, a USB-C slot.

There are no issues here as the buttons on the Vivo U10 are tactile and don’t wobble. The build also feels sturdy. This is one of the few devices we felt could survive on its own without a case, and that says something in 2019 when cases are coming bundled with smartphones. The Vivo U10 too does come with a transparent case in the box though, just in case you want that extra protection.

The Vivo U10 features a 6.35-inch IPS LCD screen with a resolution of 720 x 1544 pixels, which roughly translates to 268 PPI. You get decent sharpness when it comes to viewing text or media. The phone also gets fairly bright outdoors and most of what you see on the screen will be visible. There is a dewdrop notch up top, and that helps the phone get a screen-to-body ratio of roughly 81.4 per cent. 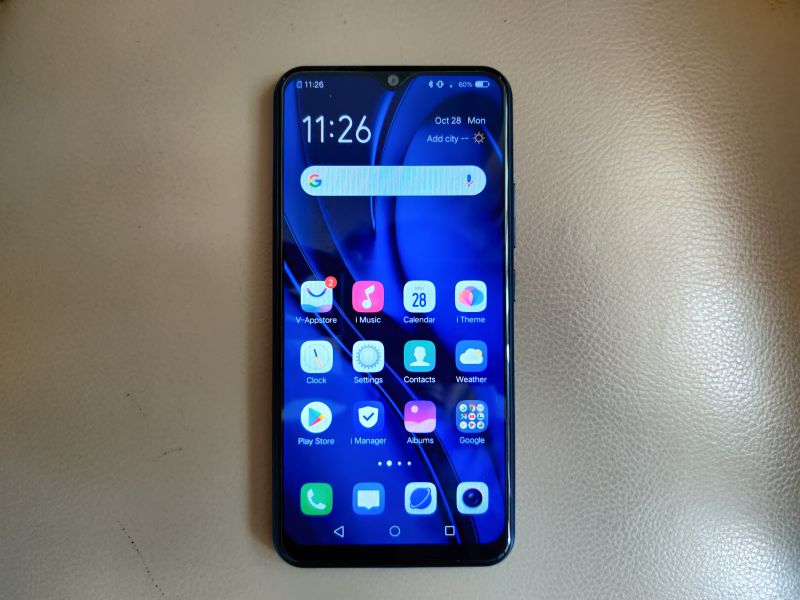 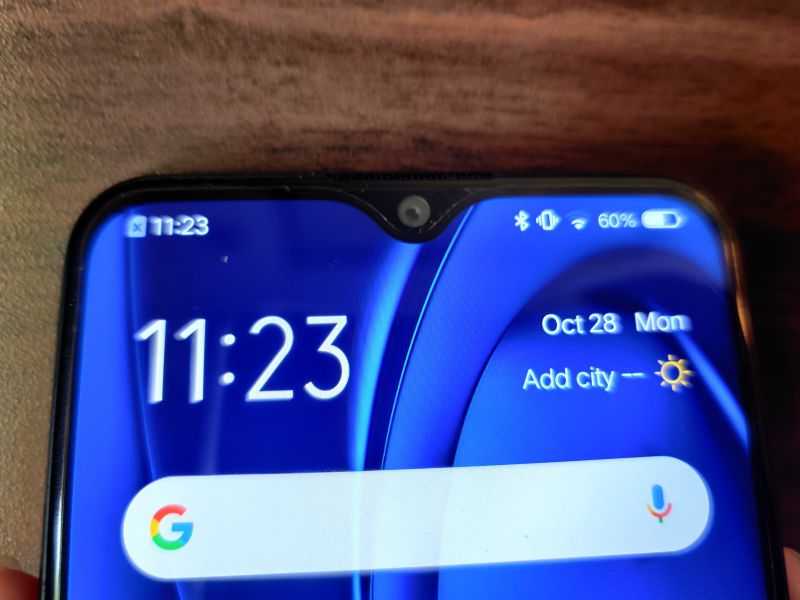 While you don’t get the depth and vibrancy of AMOLED screens at this price, the display panel used on the Vivo U10 is still pretty good. This was evident by the great viewing angles and colour reproduction on the screen throughout our usage.

The Vivo U10 features Android 9 Pie with Vivo’s FuntouchOS 9.1 on top. This brings most features from upper-tier Vivo phones to the U10, including the insane customisability, a dark mode, various gestures, face unlock, air gestures to unlock, raise to wake and a lot more unique features like manual colour adjustment and the ability to use a real-time beauty filter while video-calling through supported apps.

The catch is an interface that offers a lot straight out the box, which is great for people like us but might often be a tad too much for the easily overwhelmed. FunTouchOS is also high on its own unique look, which could be a double-edged sword for people coming from other operating systems and wondering where the quick-setting toggles are in the notification panel (The quick settings are accessed by swiping upwards from the bottom edge).

Regardless, the interface isn’t too cluttered. There is bloat when you first boot up, but those are easily uninstallable. What remains are a couple of Vivo’s own apps that you’ll probably never use.

Once you get a hang of navigating through FunTouchOS however, the experience changes pretty quickly. You’ll find a lot of the new arrangements to be actually convenient in terms of efficiency, and the customisations let you tailor your home screen to exactly how you want it to be. We’ve said it before and we’ll say it again, FunTouchOS is one of our favourites when it comes to those who refuse to settle with the basics and want to tweak everything in sight. That being said, don’t expect an Android 10 update for this phone as the unit, like all others in the price segment (except Android One phones), will probably receive only security updates, and skip Android version updates. 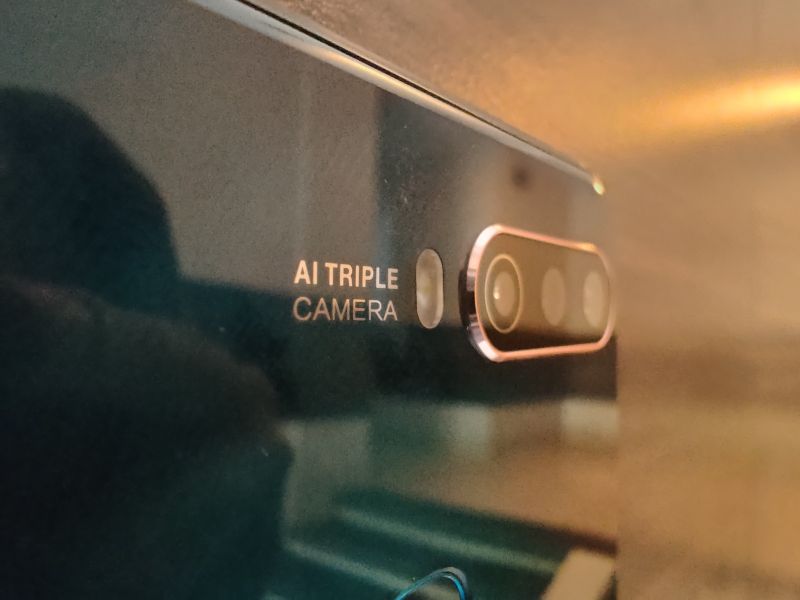 The main lens offers Phase detection auto focus that helps you focus on to pictures quickly when bringing the main subject into the frame. The pictures taken were surprisingly very colour accurate, without oversaturated colours. With the camera, you also get a bunch of features stacked categorically in the camera UI. There are real-time filters, a Pro mode, and gesture-based photo-taking options that help you click pictures when you say “Cheese” or show your palm. 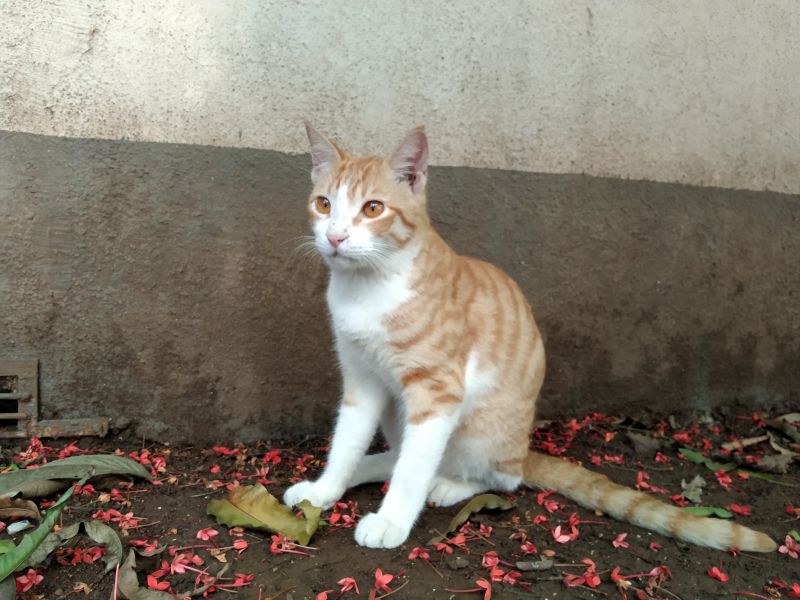 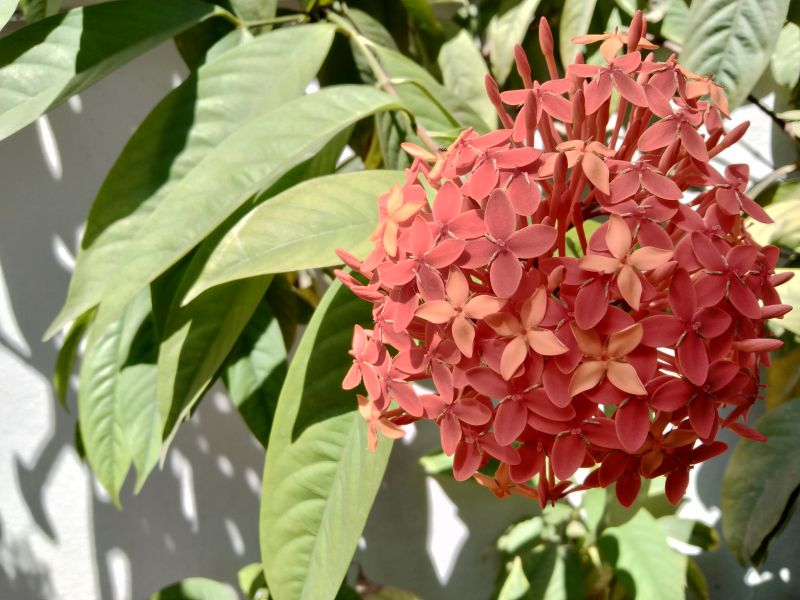 The ultra-wide lens does its job helping you take wider FOV shots like the ones below. 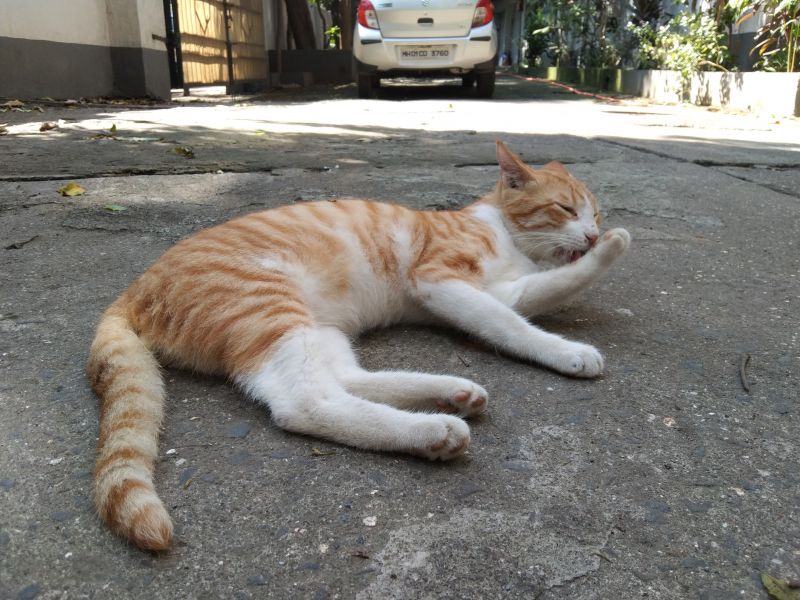 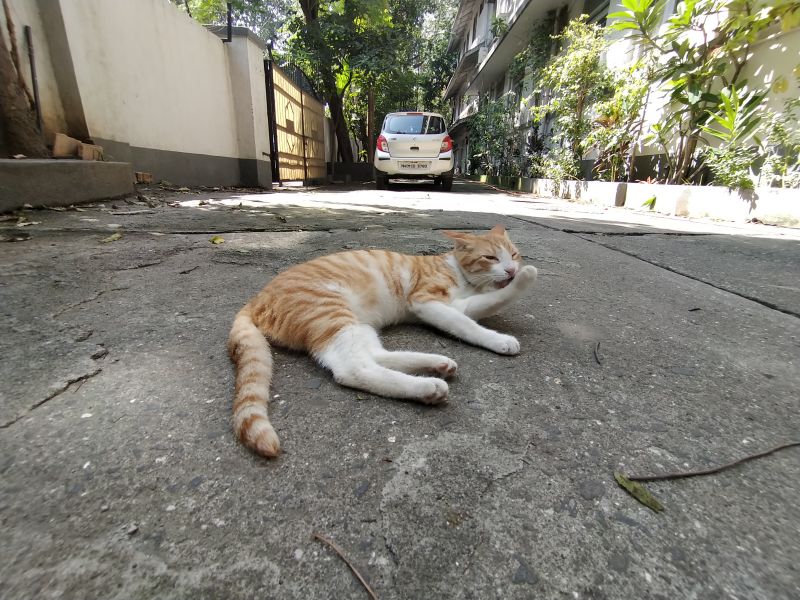 There is a Bokeh mode on the main lens that makes great use of the additional depth sensor. Bokeh photos look great. But apart from that, the phone allows you to refocus between subjects after the shot has been taken and change the blur effect intensity to provide what look like professionally taken photographs 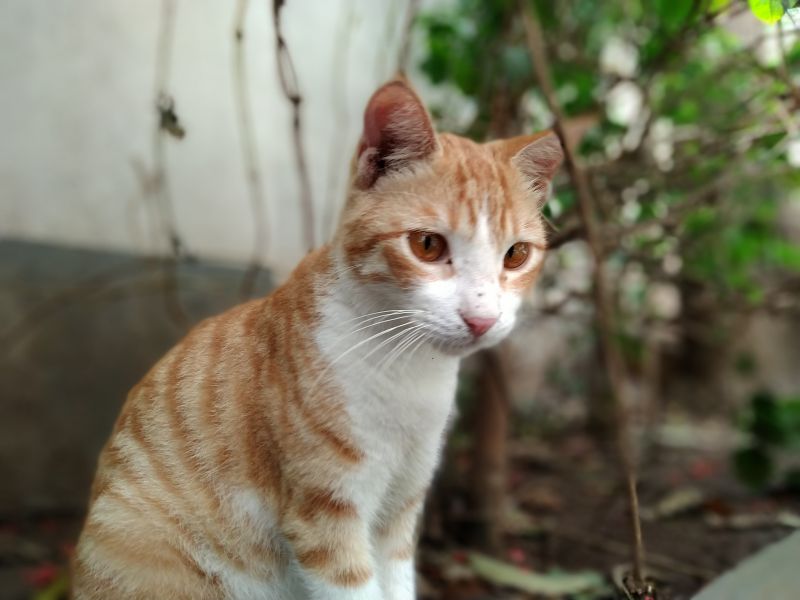 The front-facing camera takes decent pictures and despite this being a cheap phone, the pictures do not disappoint. Detailing was pretty good and so were the colours. But just like the rear cameras, the camera suffered in indoor and low-light scenarios. Also, there is no way to take portrait photos from the front camera, but there is a panorama mode instead, that lets you take wider selfies by slightly rotating the phone. 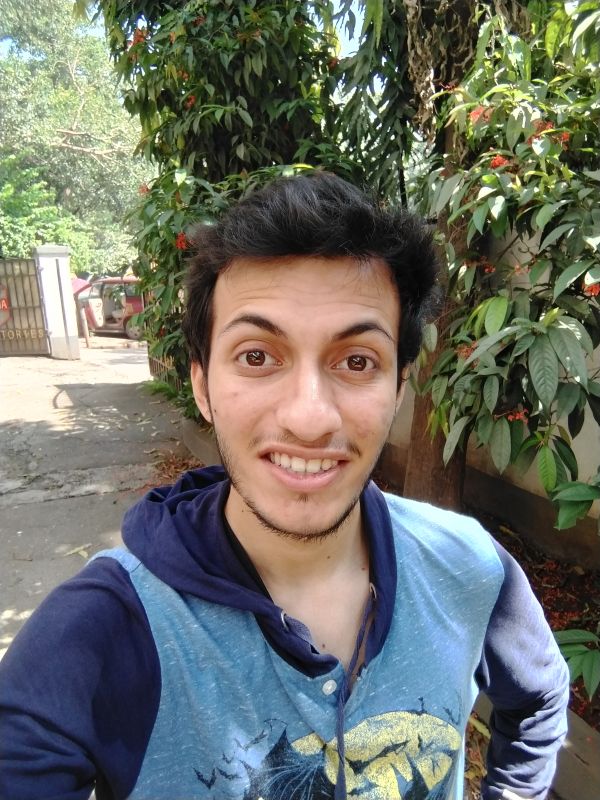 The Snapdragon 665 takes care of the performance department of the Vivo U10. Multiple apps can be run at once and unless they’re very demanding, earlier apps are not shut down/ frozen in the background. The performance of the phone remains smooth throughout, making you forget you’re using a budget phone. 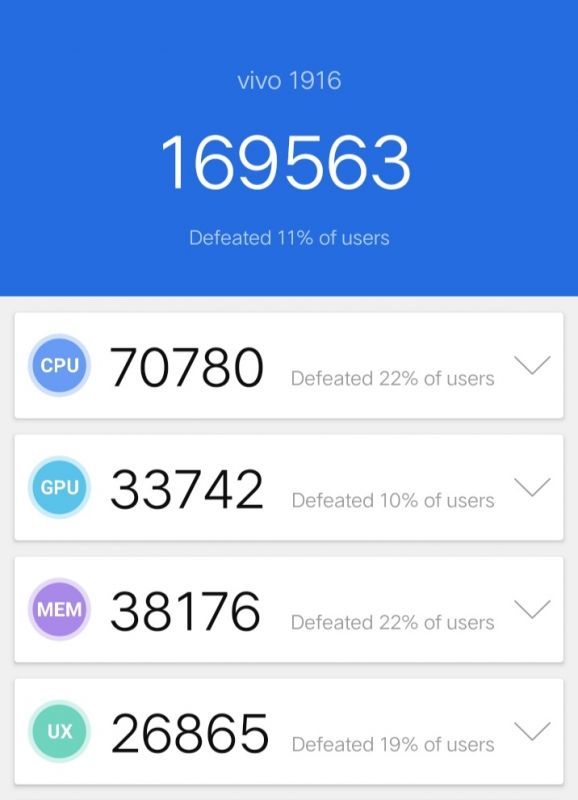 The variant we have is the highest version though, coming with 4GB RAM. There are also lower variants at 3GB RAM. Though we don’t expect a huge difference in performance between the 3GB and 4GB variants, it is the higher onboard storage that makes the 4GB variant a stronger choice.

Call quality was fantastic on the Vivo U10, and we didn’t face issues talking on either end, despite the lack of a secondary noise cancellation microphone on the device. That being said, the difference is slightly evident when you’re outdoors, but it isn’t an issue. The fingerprint sensor and the face-unlock on the device were excellent, strikingly fast and accurate. The face-unlock especially was so fast we found ourselves completely ignoring the rear-mounted fingerprint reader on most occasions.

The Vivo U10 is a decent gaming performer for the price. While lower and medium titles are handled with ease, the phone is also able to take on bigger, resource-heavy titles like PUBG and Call of Duty. PUBG, for instance, can be played on ‘Smooth’ graphics at ‘High’ frame rate and ‘Balanced’ graphics at ‘Medium’ frame-rate. The experience is not just for the namesake and even on a phone priced so low, the game is not only optimised to run pretty well, but there’s also an Ultra Game mode to slightly bump up performance and provide some neat enhancements. Features like sound localisation, 4D vibrations, off-screen autoplay, and an in-built voice changer.

Other factors like the small size and a big battery help elevate the gaming experience further, providing you with a compact form and longer gaming durations without running out of juice.

Battery life on the Vivo U10 is bliss thanks to the big 5000mAh battery. This as of now is the biggest battery in the segment, except the U10 adds 18W fast-charging support on top of it, making this the best smartphone in terms of battery life in the price bracket, bar none.

The phone can easily last two days on a single full charge with light to medium usage and lasted us about a day and a half on moderate to high usage. Apart from the big battery, factors like the low resolution of the screen contribute to the longevity of a single charge.

The Vivo U10 is a great offering in the sub Rs 10,000 category. It has everything you’d need from a 10k smartphone. The smartphone takes the approach of toning down the spec-sheet evenly, rather than eliminate some aspects entirely in the name of cost-cutting. The result- a budget smartphone that maybe isn’t the fastest, or maybe doesn’t possess the best camera, but one that can do everything. It is equipped with triple cameras, a big battery, fast charging, a fast fingerprint sensor and face unlock, and a Snapdragon 600 series processor that enables you to play the heaviest games out there at humble graphics, thus earning our title of the complete package under Rs 10K.