Two brands from one parent, Tecno and Infinix, are challenging mobile phone biggies with top-notch specs at affordable prices 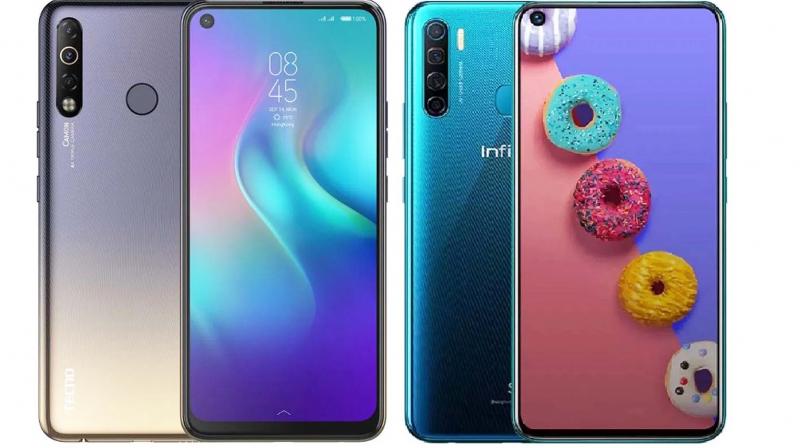 Not too long ago, triple and quad cameras on mobile phones, AI-enhanced shooting modes, gesture-based controls, face-based unlock and Google Lens image recognition were exclusive to pricey premium handsets. Such is the march of technology -- and aggressive marketing -- that today brands are offering all these features for below Rs 10000.

Case in point: two of the best and brightest in this class: the Tecno Camon 12 Air and the Infinix S5 both proudly labeled "Made in India" and launched this month by Transsion. Both come with approximately 6.5 inch HD display, 4 GB RAM and 64 GB storage expandable to 256 GB, run Android 9.0 and are fueled by the same Helio P22 8-core processor. Both take dual 4G VoLTE SIMS and offer 4000mAh batteries. And both are embedded with Google Lens. Direct the phone's camera at an object and Google Lens will identify the object or read barcodes, QR codes, labels and text and show relevant search results -- all on the fly.

Peas in a pod? Yes but there are special features to each phone.

The Tecno Camon 12 Air has a triple rear camera -- a 16 MP primary; a 5 MP ultrawide with 120 degree field of view and a 2 MP depth sensor -- plus four-element flash. Extreme close-ups or wide landscapes, this lens works equally well. The 8 MP selfie camera has AI software to improve your face 170 different ways. Eat your heart out Helen of Troy! The face shot from this camera will launch 10,000 ships.

The Infinix S5 has a quad rear camera with basic 16 MP lens, a 5 MP wide angle plus super macro and depth sensor. Its field covers 114 degrees. The front camera is rated 32 MP. You can perform many functions like answering calls, taking screen shots etc by simple gestures. I particularly liked the last feature: One often needs a screen capture of documents and most phones makes you press two buttons simultaneously: never works for me.

I have been using the phones alternatively for a week and frankly being asked to say which is better is like asking a mother which twin she loves more. Don't ask, won't tell! Giving up either will be a wrench. And at Rs 9999 for the Camon 12 Air and Rs 8999 for the Infinix S5, price is not a deal breaker. You pick either and you can't go wrong.