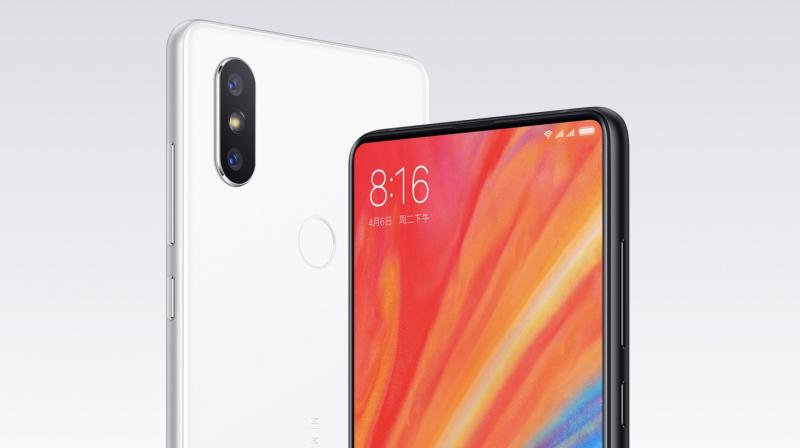 The Mi MIX 2S is claimed by Xiaomi to be a hardcore iPhone X rival.

After months of rumours and weird concept preview, Xiaomi has finally unveiled the much-hyped Mi MIX 2S. The MIX 2S is their flagship offering for 2018 and costs RMB 3999 (approximately Rs 41,000) for the top-end 8GB/256GB variant. Xiaomi also unveiled a wireless charger for RMB 99 (roughly Rs 1,000).

The Mi MIX 2S is claimed by Xiaomi to be a hardcore iPhone X rival. In fact, through the presentation, Xiaomi assured that the Mi MIX 2S can crush the iPhone x on various parameters, the primary one being the camera. The Mi MIX 2S gains a 12MP + 12MP dual rear camera setup, which imitates that of the iPhone X, both in form and function. There’s a wide angle lens as well as a telephoto lens. Xiaomi has relied on the Sony IMX 363 sensor that consists of 1.4-micron pixels. The camera features dual-pixel autofocus, which Xiaomi claims to achieve better low light performance than that of the iPhone X.

Since this is a 2018 flagship, Xiaomi has relied heavily on Artificial Intelligence to enhance the performance. The AI assists the camera to take portrait shots that can implement bokeh effects. Xiaomi claims that the blur is more natural than before and users can alter the background with special effects. The selfie camera is now also assisted by AI, which means one can expect portrait selfies from the single front camera, like the Google Pixel 2. The Mi MIX 2S also houses more AI tricks up its sleeves such as live translation from photos, including currency conversion. All of Xiaomi’s efforts have helped the Mi MIX 2S achieve a DxOMark of 101, which exceeds the Pixel 2 and the Galaxy S9+. However, Xiaomi stressed on the fact that the camera will get better over time as the company has yet to optimise the software for the new hardware.

Trickling down to the hardware, the Mi MIX 2S retains the familiar form factor of the Mi MIX 2. The new model now gains a 7000 series aluminium frame with a ceramic rear panel, which will be made available in both black and white. Inside, a brand new Snapdragon 845 takes care of all the smartphone needs. Xiaomi claims that the optimisation gone into the MIX 2S has yielded an AnTuTu score of 277178, which is class leading. While Xiaomi didn’t mention the version of Android the phone is utilising, they did mention the presence of Xiaomi’s new voice assistant called the XiaoAI. XiaoAI is an AI voice assistant that can integrate with all smart home appliances as well as provide information from the Internet. It seems to be closely integrated with the device, just like Samsung’s Bixby. Xiaomi claims that the Mi MIX 2S can recognise 27.2 images per second. The phone will also gain support for ARCore via a software update.

The company also unveiled a Mi Gaming Laptop 15.6-inch as well as Mi AI Speaker Mini for the Chinese market. The Mi MIX 2S’ availability for the Indian market hasn’t been disclosed yet.