The device will also be powered by a Qualcomm Snapdragon 665 and will have a 5000mAh battery. 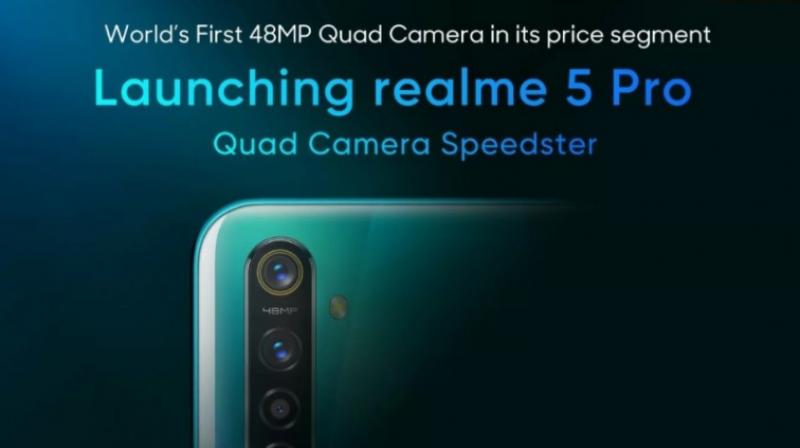 The Realme 5 Pro will be supported by the company’s VOOC Flash Charge 3.0 technology offering 55 percent charge in 30 minutes.

Ahead of the official launch of Realme’s upcoming smartphones, the Realme 5 and the Realme 5 Pro, their specifications have been revealed by Realme’s official Twitter handle.

Expand your perspective and see it all with the Ultra Wide Angle lens on #realme5series.
Get ready to #JoinTheReal5quad and watch the launch live at 12:30 PM, 20th August. #LeapToQuadCamera
Know more: https://t.co/IczXkhy4lB pic.twitter.com/VhsbMTnxIy

The specs revealed include the presence of a 48MP Sony IMX586 sensor, a diamond-cut design similar to the Realme 3i and a Waterdrop Notch. The phone will feature slim bezels on the top and sides and a thick chin.

According to Flipkart, the regular Realme 5 (Not the pro) will have a primary camera with f/1.8 lens. The device will also be powered by a Qualcomm Snapdragon 665, as revealed by a Geekbench listing. The Realme 5 and 5 Pro will have a 5000mAh battery, the biggest battery on a Realme phone yet.

The 5 Pro will also likely have the same processor powering it and the same battery, but the battery will be supported by the company’s VOOC Flash Charge 3.0 technology offering 55 percent charge in 30 minutes.

More details will surface soon as the device is mere days away from its launch on Tuesday, August 20.