The Z2 Force sports a shatterproof display and comes bundled with the Moto TurboPower Mod. 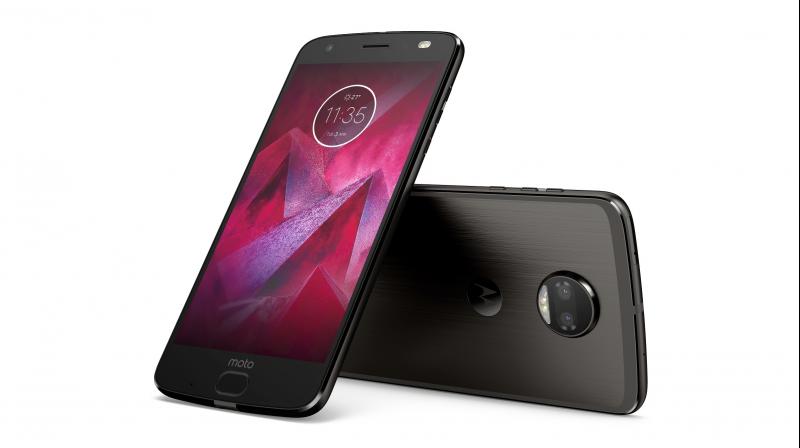 The Z2 Force is fuelled by a 2730mAh battery, which combined with Moto TurboPower Mod bumps the battery capacity to 6220mAh — Motorola claims to achieve up to two days of battery backup.

Lenovo-led Motorola has launched its 2017’s flagship smartphone, the Moto Z2 Force for the Indian market. Priced at Rs 34,999, the Z2 Force will directly compete with the like of OnePlus 5T, Honor View 10, Nokia 8 and Samsung Galaxy A8+. As a limited period offer, Motorola will be bundling along the Moto TurboPower mod with the smartphone, which adds an additional 3490mAh battery capacity.

The Moto Z2 Force, as the name suggests, a 5.5-inch quad HD 16:9 AMOLED display with shatterproof protection. The Z2 Force also has a water-repellent coating to protect it from splashes and light showers. The smartphone is powered by a Qualcomm Snapdragon 835 chipset coupled with 6GB of RAM and 64GB of onboard storage. The Z2 Force is rocking Android 8.0 Oreo at the time of launch. Motorola’s exclusive Moto Experiences features offer special features such as night display that automatically adjusts the screen to warmer tones at night and instant queries in Moto Voice that provide helpful information like the daily weather or calendar updates. There’s also Bluetooth 5.0 connectivity built-in as well.

In terms of photography, the Z2 Force sports a 12MP dual rear camera setup with f/2.0 aperture, where one sensor captures images in monochrome for enhanced details and the other one captures in normal colours. Selfies are handled by a 5MP sensor with f/2.2 aperture.

The Z2 Force is fuelled by a 2730mAh battery, which combined with Moto TurboPower Mod bumps the battery capacity to 6220mAh — Motorola claims to achieve up to two days of battery backup. Motorola also bundles a 30W TurboPower charger that is claimed to top up the battery up to 50 per cent in approximately 20 minutes.