With the iPhone 11 launched and the Pixel 4 almost completely leaked, we compare both 2019 flagships to find which is the best. 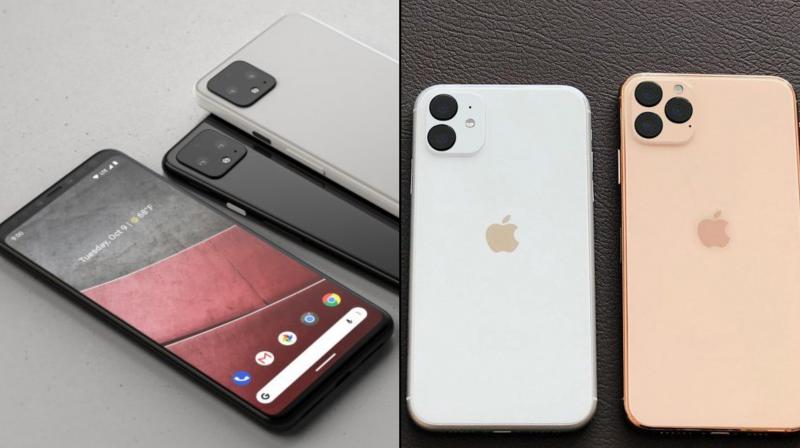 The Pixel 4 is rumoured to be released in October and while that isn’t very far away, multiple teasers and leaks have made sure that people know most of what to expect from the new phone, from specs to services.

The latest iPhone against the latest Pixel device is perhaps the greatest smartphone comparison there is. Both brands put out flagships year after here and are the only two major smartphones that makes their own hardware as well as software, ensuring a completely seamless experience for their users.

The latest in the iPhone lineup launched yesterday and we have three iPhones, the iPhone 11, iPhone 11 Pro and iPhone 11 Pro Max. We now compare it with the next biggest launch of the year, Google Pixel 4. The Pixel 4 is rumoured to be released in October and while that isn’t very far away, multiple teasers and leaks have made sure that people know most of what to expect from the new phone, from specs to services.

Design: A thing for squares

Perhaps the most notable distinct feature in both the phones this year is the unique square-bezel on the back of the phones that contain the camera modules. While the design is essentially the same for both the devices, the alignment and size of the sensors make the one on the Pixel look somewhat nice and classy while the one on the iPhones looks comically ugly.

The back of the new Google Pixel 4 is also reported to ditch the dual-tone finish and go for a complete glass back, which may point to wireless charging.

From the front, the iPhone sticks to the tried and tested wide notch on the top and the rest remains the exact same like the previous iPhone. The new Pixel 4, on the other hand, brings a drastically new look to the table from the front, opting to go for a large top bezel while most brands have almost perfected the 100 per cent screen-to-body. This, however, has a reason behind it and the idea is to accommodate the multitude of sensors that are housed in the Pixel 4’s top notch including the Project Soli chip that will allow the phone to be used without touching it.

While the iPhones came out in two new colours, there are also reports of the Pixel 4 releasing in a new bold orange-like shade.

With support for the Apple pencil officially dropped for the iPhone 11 series, the Pixel 4 likely will have the upper hand when it comes to displaying quality.

Apple’s trusted FaceID will be continued on the iPhone 11 series as well and rumours have it that the newer FaceID will work better and have a wider angle of detection. The Pixel 4, on the other hand, will also implement 3D facial recognition for the first time, which was revealed after Google employees were spotted collecting people’s face data in exchange for money. The Pixel 4, however, will also benefit from the Soli chip will apparently detect when the trusted face is approaching the phone before you even pick it up, so basically, users always pick up an unlocked phone.

Google has always excelled at the camera department, and so has Apple. The iPhone 11 series, in particular, have been all about the cameras. The iPhone 11 Pro and Pro Max have a triple 12MP setup on the rear with support for night mode. The Google Pixel 4 will have a dual-camera setup for the first time, and that’s a big margin of improvement considering how great the Pixel cameras have been with a single camera.

The Google Pixel 4 will have the Qualcomm Snapdragon 855 powering it coupled with 6GB RAM and while that is an improvement, it is still lesser than what other Android flagships have been offering.

But in terms of numbers, it is on par with the iPhone 11 Pro and 11 Pro Max which also feature 6GB RAM. Though Apple and Pixel phones function very differently when it comes to multitasking, the RAM figures do not indicate any comparison between the performances of the two phones on their own. The major difference will be the Snapdragon 855 on the Pixel 4 and the A13 Bionic chip powering the iPhones.

Not just Huawei equipment, now US vows to keep out employees of Chinese firm