Technology   In Other news  31 May 2020  No human contact during COVID-19, lonely elders in South Korea watched by AI
Technology, In Other news

Social workers, who have smartphone apps, make calls or visits when users don’t use their devices for more than 24 hours. 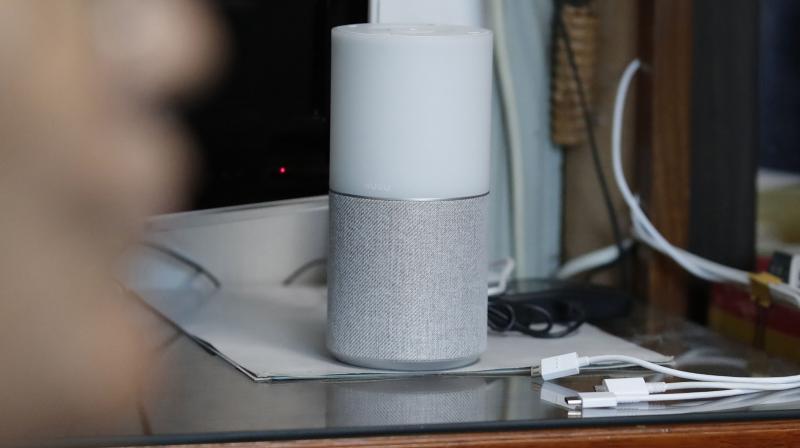 SK Telecom's AI speaker Nugu built with an artificial intelligence called "Aria" and a lamp that turns blue when processing voice commands for news, music and internet searches, is seen in Seoul, South Korea, on May 13, 2020. The devices can also use quizzes to monitor the memory and cognitive functions of their elderly users, which would be potentially useful for advising treatments. (Photo | AP)

Seoul: In a cramped office in eastern Seoul, Hwang Seungwon points a remote control toward a huge NASA-like overhead screen stretching across one of the walls.

With each flick of the control, a colourful array of pie charts, graphs and maps reveals the search habits of thousands of South Korean senior citizens being monitored by voice-enabled “smart” speakers, an experimental remote care service the company says is increasingly needed during the coronavirus crisis.

“We closely monitor for signs of danger, whether they are more frequently using search words that indicate rising states of loneliness or insecurity,” said Hwang, director of a social enterprise that handles SK Telecom’s services. Trigger words lead to a recommendation for a visit by public health officials.

As South Korea’s government pushes to allow businesses to access vast amounts of personal information and to ease restrictions holding back telemedicine, tech firms could potentially find much bigger markets for their artificial intelligence and other emerging technologies.

The drive, resisted for years by civil liberty advocates and medical professionals, has been reinvigorated by a technology-driven fight against COVID-19. It has so far allowed South Korea to emerge as something of a coronavirus success story but also raised broader worries that privacy is being sacrificed for epidemiological gains.

Armed with an infectious disease law that was strengthened after a 2015 outbreak of a different coronavirus, MERS, health authorities have aggressively used credit-card records, surveillance videos and cellphone data to find and isolate potential virus carriers.

Locations where patients went before they were diagnosed are published on websites and released through cellphone alerts. Smartphone tracking apps are used to monitor around 30,000 individuals quarantined at home.

Starting Monday, entertainment venues in Seoul, Incheon and Daejeon will be required to register customers with smartphone QR codes so they can be easily located if needed. The requirement expands nationwide on June 10.

But there’s a dark side.

People here have often managed to trace back the online information to the unnamed virus carriers, exposing embarrassing personal details and making them targets of public contempt.

A low point came in early May when local media described some Seoul nightclubs linked to hundreds of infections as catering to sexual minorities, triggering homophobic responses.

Officials reacted by expanding “anonymous testing,” which allowed people to provide only their phone numbers and not their names during tests. There was a subsequent increase in tests.

The past months have exposed a stark division about the best ways to make important decisions when privacy concerns collide with public health needs, said Haksoo Ko, a Seoul National University law professor and co-director of the school’s Artificial Intelligence Policy Initiative.

Around 3,200 people across the country, mostly older than 70 and living alone, have so far allowed the SK Telecom speakers to listen to them 24 hours a day since the service launched in April 2019.

The company expects users to at least double by the end of the year, judging by local government interest. The technology has reduced human contact in welfare services while still providing governments with a tool to prevent elderly residents from dying alone. That’s especially needed in a country grappling with an aging population and high poverty rates among retirees.

The speakers are built with an artificial intelligence called “Aria” and a lamp that turns blue when processing voice commands for news, music and internet searches. The devices can also use quizzes to monitor the memory and cognitive functions of their elderly users, which would be potentially useful for advising treatments.

But it’s difficult for SK Telecom’s clients to use the information without clear legal guidelines for handling health data on private networks.

Similar reasons may also impede domestic use of health technologies developed by Samsung Electronics, which recently received approval for a smartwatch application that monitors blood pressure.

President Moon Jae-in’s administration has said data-driven industries will be critical in boosting a pandemic-hit economy.

Officials are preparing regulations for revised data laws that lawmakers passed in January after months of wrangling. They aim to allow businesses greater freedom in collecting and analyzing anonymous personal data without seeking individual consent.

If they work as intended, optimists say the laws would allow artificial intelligence to truly take off and pave the way for highly customized financial and health care services after they start in August.

“Companies will always have an endless thirst for data, but you can’t give it to them all,” he said.

Industrial benefits will be limited if officials can’t find the right combination of techniques to process personal information so that it can’t be used to identify individuals. Health and government authorities have failed to do this during the pandemic.

South Korea’s anti-virus experience provides “lots of lessons and implications” as it steps toward a data-driven economy, Ko said.

“With data, it’s bad to take ‘the more, the better’ approach,” he said. “An appropriate control system needs to be baked into the process, to make decisions on data access based on necessity and sensitivity and restrict access to information that isn’t really needed.”

Social workers, who have smartphone apps that look like a mini version of the main dashboard, make calls or visits when users don’t use their devices for more than 24 hours.

“It’s nice to have something to talk to,” said Lee Chang-geun, an 89-year-old who has lived alone in his small apartment since his wife died three years ago. “But I wish they developed an Aria function for opening doors. What good is a distress signal if I die while emergency workers try to force open my door?”