The company also launched Gmail in 2004, providing internet users with an inbox with 1GB of space, which was unheard of until then. 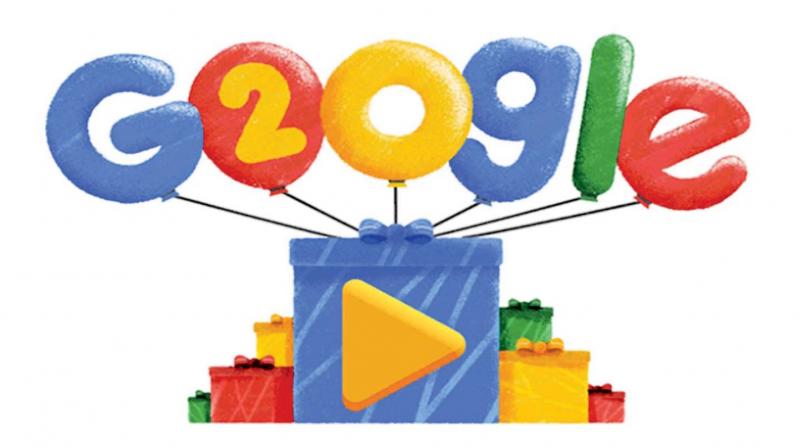 Here are the milestones of Google, which has successfully completed two decades.

Long back, people used to leaf through the pages of dictionary to extract meaning of a new word they came across or rush to the library and dig their heads into encyclopedias to know something more about a topic. With time and evolution of technology, all the labour has been replaced by Google; it’s so popular that surfing is now known as googling!

What started as a mere search engine in 1998 is, in its 20th year, the most influential technology company in shaping the modern internet. Created by Sergey Brin and Larry Page at Stanford University on a budget of $1,00,000, Google, that started off as a competitor for Altavista and Yahoo, the two popular search engines in the earlier days of the internet, now manages eight products with more than 1 billion users each.

It wasn’t an overnight popularity. In addition to the PageRank algorithm – used to rank search results based on linking behavior, one of the most important steps the company took in order to expand its territories was selling advertisements next to its search results.

When Google AdWords was launched in 2000, it changed Google into a highly profitable company. Combined with its powerful PageRank system of indexing search results, the company went public in 2004, offering investors to purchase its shares. The company also launched Gmail in 2004, providing internet users with an inbox with 1GB of space, which was unheard of until then.

Besides that, YouTube, which was acquired by Google in 2006 and operating system Android, attracted lot many internet users. According to the critics, Android remains the most preferred operating systems for smartphones till date. Thanks to the feature that makes it viable to both expensive as well as budget phones.

Despite changing the internet, Google has also faced much criticism in the past two decades after its users had to give up their privacy so that the company can tailor advertisements for them. Google’s Chrome browser can access the user’s browsing history, its Android phone keeps a track on the places travelled, and the Gmail inbox is scanned for keywords to attain the same. The company had also come under scrutiny by the European Union, which handed the company a record fine of $5billion for violating anti-trust laws. Despite criticisms, experts believe Google definitely has a brighter future.

Currently, the company is working on futuristic projects, including self-driving cars, artificial intelligence, robotics and even attempts at creating an eternal life. To bring these different ventures under one umbrella, Google officially changed its name to Alphabet in 2015, which is one of the top five tech companies in the world and is currently valued at over $700billion. The company is therefore cementing its chance to go strong for another 20 years.