18-year-old builds a 3D printer out of three discarded inkjet printers and a flatbed scanner. 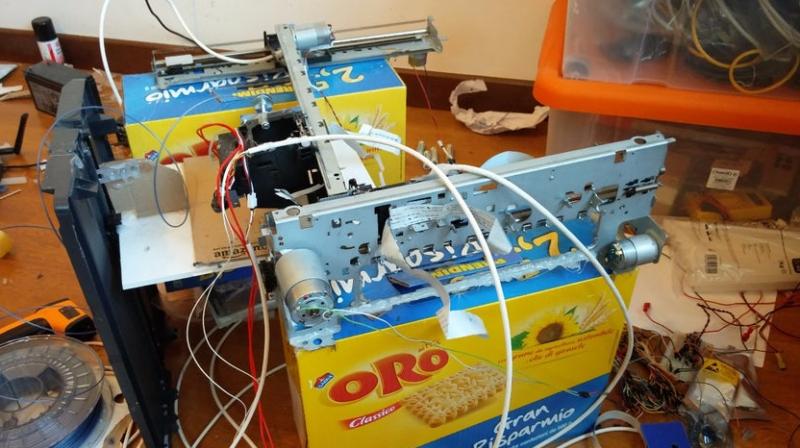 Lizzit’s printer was able to achieve a print resolution of 33 microns on both axes, which is impressive for a home-made printer built from scrap.

The manufacturing industry is getting the hang of 3D printers, using this novel technology to build (or rather print) complex parts without any difficulty. The only issue with these state-of-the-art machines is that they are immensely expensive to own and maintain, which makes it out-of-reach for the common man. However, Michele Lizzit, an 18-year-old from Italy, has found a way to build a 3D printer for a price of 10 euros.

Lizzit salvaged parts for his DIY 3D printer from three discarded Inkjet printers and a flatbed scanner for managing the printer’s mechanical components. To make these mechanical parts work, he had to get a hotend extruder, an ATmega328 chipset, a motor driver, three driver boards and a transistor.

The extruder housing was 3D printed from a standard desktop machine and used the inkjet printer’s paper loading mechanism instead of a hobbed bolt. A plastic plate from a scanner was topped by cardboard packaging from Amazon and is reported to offer great adhesion for prints. As for now, cardboard biscuit boxes currently support the structure. To make the whole thing work with a computer, he had to develop an open source system firmware.

After reading through all of these, the primary question is — did it work? Lizzit’s printer was able to achieve a print resolution of 33 microns on both axes, which is impressive for a home-made printer built from scrap. Upcoming firmware will allow the system to compensate for filament slipping, auto cleaning a clogged nozzle and select the correct temperature for a filament on its own.