First drive: The XL6’s an SUV at heart

The new Maruti Suzuki XL6 is not exactly an SUV, but it may be truer to the car category than many of the vehicles that identify with the tag. 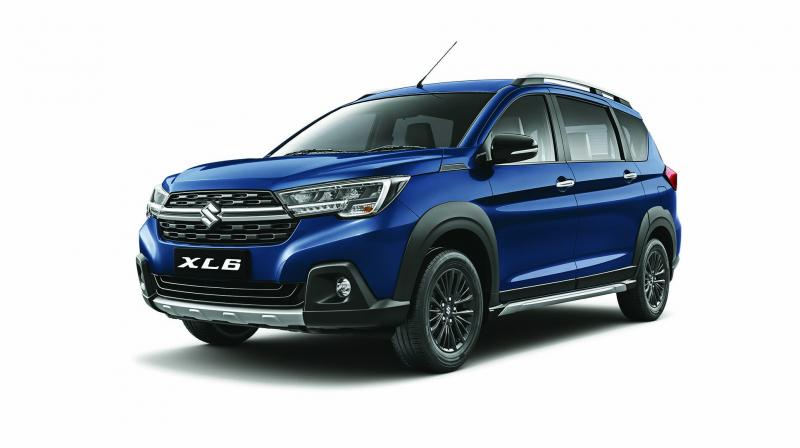 First impressions of the XL6 are impressive as, even from a distance, it looks imposing with the new front grille and the large headlamps. Look closer and all the details look more premium.

Based on the popular and successful Maruti Ertiga, the XL6 has several SUV styling elements to distinguish it from its multipurpose vehicle or MPV sibling.

Despite the overall same profile, Maruti Suzuki, India’s biggest carmaker, has succeeded in making the Maruti XL6 premium compared to the Ertiga MPV.

Does it really offer something new over the Ertiga? I drove both the manual and automatic variants in the picturesque outskirts of the Pink City of Jaipur to understand what it claims to offer.

First impressions of the XL6 are impressive as, even from a distance, it looks imposing with the new front grille and the large headlamps. Look closer and all the details look more premium.

The ‘XL’ in the name expands to ‘exclusive’ (not extra large), while the ‘6’ denotes six-seater. Maruti will retail the XL6 through its premium Nexa network. There are no diesel engines on offer but the XL6’s BS-6 petrol motor does feature mild-hybrid tech and is available with the choice of manual and automatic transmissions.

The XL6 looks more rugged; adding some distinction to the car is its redone front end. A raised bonnet line, a larger and bolder grille, and a scuff plate give the XL6 an SUV face. Also new and unique to the XL6 is its full-LED headlights. The cladding on the bumpers and at the sides gives mass to the design but there is some visual mismatch with the wheels. The 15-inch rims, finished in black, just look puny under the exaggerated wheel arches. Roof rails, a rear scuff plate and dual-tone tail gate are elements exclusive to the XL6.

Inside too, there certainly appears to be a premium neat dashboard, and the dials and the all-black interior theme gives it a more upmarket look. The faux black ash wood finish, the leatherette upholstered seats, and even the knitted roof lining are other elements that uplift the experience. Both front and rear seats are comy, even if the leatherette seats are slightly firm.

The third row is also comfortable and seats split and fold to sit flush with the boot floor, to take luggage capacity from 209 litres to a useful 550 litres.

The XL6 in Zeta and Alpha trims get plenty of features. In addition to auto climate control, keyless entry and exit, and electric fold mirrors that top-spec Ertigas come with, the XL6 gets much wanted additions like LED headlights with DRLs, and cruise control. The XL6 also goes one up on the Ertiga by deploying Maruti’s new-gen SmartPlay Studio infotainment unit. The 7.0-inch touchscreen-based system is fairly slick, well laid out and comes bundled with Android Auto and Apple CarPlay.

Maruti has not changed the engine and suspension in any way. The 1.5-litre petrol engine, now updated to BS-6 emission norm, features mild-hybrid tech, with the setup comprising an integrated starter generator and a secondary lithium-ion battery pack. The motor gives some assist under heavy acceleration but there is no pure-electric mode.

The initial responses on the XL6 are good. The engine makes 105PS and 138Nm of torque and comes along with either a 5-speed manual or 4-speed automatic (with torque converter) transmission. The XL6 moves and rides just like an Ertiga, with the petrol engine being fairly refined and willing. The delivery of power is quite linear too, but to make any sort of rapid progress, you have to push hard and get the engine higher into its rev range. While the engine is eager to rev, it does get a bit vocal beyond 5,000 rpm.

It is smooth and a joy ride but the automatic gives a little vibration after you touch 120kmph speed on the highway. There is fair power for driving with a full load and cruise control helps maintain a steady clip. However, those used to torquier turbo-diesels will find pulling power a bit lacking here.

Should I buy it?

With the price range from Rs 9.8 lakh to Rs 11.46 lakh, the XL6 range offers a good deal for climbing on to an overall premium experience. Also, those opting for top-end Ertiga are likely to upgrade to the XL6 even as it will attract new buyers.