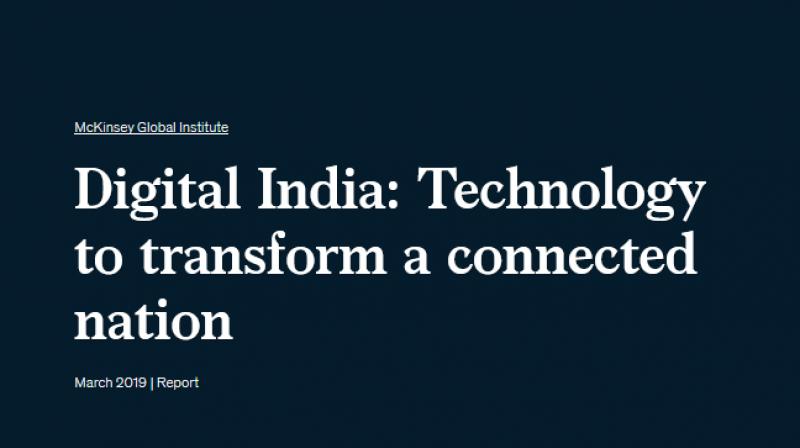 In a new report Digital India: Technology to transform a connected nation, the McKinsey Global Institute (MGI) concludes that while the core digital sectors such as IT and business process management (IT-BPM), digital communication services including telecom, and electronics manufacturing have the potential to double their contribution to GDP by 2025, there are new and exciting opportunities in the $500bn of economic value that could be generated by newly digitizing sectors. These include agriculture, education, financial services, healthcare, logistics, retail and manufacturing, where digital innovations are already driving huge productivity and growth benefits.

McKinsey’s survey of digital readiness covering some 600 companies suggests an uneven pattern of digital adoption among businesses. “Sectors alone do not predict how much a company has digitized,’’ said Anu Madgavkar, an MGI partner who headed the research. “MGI’s India Firm Digitization Index shows that there are leaders and laggards on digital adoption across all sectors, from IT and media to healthcare, energy, and manufacturing. Company size does not correlate to digital readiness: small companies are leapfrogging in areas such as digital payments and digital marketing,” she added.

“Leading companies are already achieving a 30-per cent increase in productivity by deploying digital technology to drive sales, operations productivity and new business models. There is a 2-3x gap between leaders and laggards in each sector based on each company’s leadership and execution intensity,” said Alok Kshirsagar, Senior Partner, McKinsey & Company

The report also finds that the potential productivity unlocked by the digital economy could create up to 60-65 million jobs across almost all sectors by 2025. Digitization may also automate or eliminate the equivalent of 40 million to 45 million current jobs, necessitating large scale retraining and redeployment. “The changes brought by digital adoption will disrupt India’s labour force. While technology will supplant workers in some areas, it will augment them in other areas and many jobs will change as machines complement humans in the workplace,” said Anu Madgavkar

To prepare for these changes, workers will need to be retrained at a massive scale – from high-tech workers trained in data analytics, artificial intelligence and blockchain, to workers who need functional digital skills necessary to operate in organized digitally-enabled value chains, such as in e-commerce, ride-hailing, telemedicine, or IoT-enabled plants and warehouses. “This will require deep partnerships across companies as well as in the public and private sector,” adds Alok Kshirsagar.

MGI’s analysis of 17 mature and emerging economies finds India is digitising faster than any other country in the study save Indonesia—and there is plenty of room to grow. India’s internet subscriber base of 560 million is second only to that of China, but still only 40 per cent of the populace. Close to 90 per cent of all retail transactions in India, by number, are still made in cash. While e-commerce revenue is growing at 20 to 25 per cent per year in India, only 5 per cent of trade is done online, compared with 15 per cent in China.

The report emphasizes that if India can continue its digital growth trajectory and prepare its workforce the rewards will be palpable to hundreds of millions of its citizens. However, all stakeholders will need to respond effectively if India is to achieve its digital potential. Executives will need to anticipate the digital forces that will disrupt their businesses and invest in building capabilities, including partnering with universities and outsourcing or acquiring talent to deliver digital projects. Governments will need to invest in digital infrastructure and public data that organizations can leverage even as they put in place strong privacy and security safeguards. Capturing the gains of the digital economy will require more ease in creating, scaling, and exiting startups, as well as policies to facilitate retraining and new-economy jobs for workers. Individuals will need to inform themselves about how the digital economy could affect them as workers and consumers and prepare to capture its opportunities.