Covid-19 crisis may leave us vulnerable to surveillance

Who is to stop governments from continuing to use surveillance technologies even after the pandemic is brought under control? 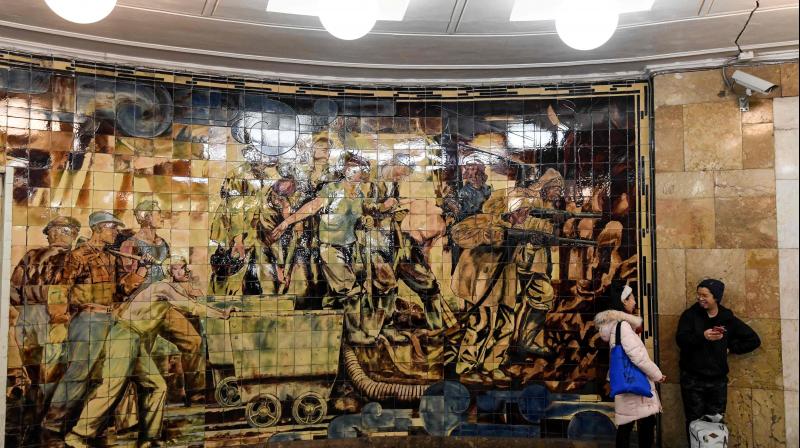 Photo shows a surveillance camera at a metro station in Moscow on January 27, 2020. A vast and contentious network of facial-recognition cameras keeping watch over Moscow is now being used in the effort to slow the rapid spread of coronavirus in Russia. (AFP)

By late March, it became clear that China, the country that reported the first animal-to-human transfer of the novel coronavirus Covid-19, has been able to rein in the virus. The Chinese government employed every weapon in its very impressive arsenal -- from isolation to monitoring people -- to control the outbreak. It literally felt the pulse of the people in the fight against Covid-19, employing Artificial Intelligence and surveillance tools to keep track of the infected.

By closely monitoring people’s smartphones, making use of hundreds of millions of face-recognition cameras, and obliging people to check and report their body temperature and medical condition, the Chinese authorities could not only quickly identify suspected coronavirus carriers, but also track their movements and identify anyone they came into contact with.

China is not the only country to have used technology to fight the coronavirus. The government of Israel has authorised its security agencies to deploy surveillance technology normally reserved for battling terrorists to track Covid-19 patients.

While those infected would naturally welcome any method employed to treat them, the fact that the government could use using technology to monitor movement of individuals is a terrifying prospect indeed.

While it is by itself an infringement of people’s privacy, the ability to even remotely monitor people’s body temperature and blood pressure increases the chances of governments manipulating citizens’ behaviour, their reactions and ultimately, who they vote for.

A boon for authoritarians

While governments in normal times take decisions after years of deliberation, a pandemic like the one that is wreaking havoc around the world is forcing them to act in haste. Naturally, people and businesses are reacting to the government’s decisions and accepting these decisions without much thought or debate.

This is a grave error, as decisions taken during such a crisis, plans and their implementation by both the people and governments while we battle this pandemic, will probably shape the world for years to come.

Our actions and reactions will shape our healthcare systems, our economy, politics and culture, in fact every aspect of our life. Therefore, it is extremely important that the long-term consequences of each decision taken by the government are carefully considered, even if these decisions are taken post-haste.

As seen in China, the pandemic will live out this cycle in three to four months, but in the name of checking the spread of this virus, governments are utilising technologies that have the potential to let them opt for totalitarian surveillance if they want.

Ideally, when taking decisions, the consideration of the government should not only be on the immediate threat, but also on what will happen when the crisis abates. The question here is whether the governments of countries like China and Israel are doing this.

The advantage of technology and use of Artificial Intelligence, ostensibly meant to save the general public from the pandemic, may at this time come at a cost of our privacy even as it may seem to be the only way out for the authorities.

On Thursday, the Hyderabad city police announced that they will use the Automated Number Plate Recognition System to monitor people who cross the three-km rule in place as part of the lockdown. The announcement may sound innocuous, but the fact remains that it is possible for the government to keep tabs on our movement — where we go, how long do we stop there, when we return — without us even knowing.

In fact, technology allows even private companies, not only the government, to monitor our location, our choice of food, which website we visit online, in fact every aspect of our digital life, every day.

There was a huge outcry over the draft Data Protection Bill — the biggest concerns are the departures from the 2018 draft of the same Bill.

Crucially, the requirement that government processing of data be “necessary and proportionate” has been dropped from the draft Bill. Furthermore, a provision was added granting the government complete discretion to exempt any entity or department from any part of the law. This leaves the current legal vacuum around India’s surveillance and intelligence services intact, which is fundamentally incompatible with effective privacy protection.

Also, questions have been raised on the independence of the Data Protection Authority, the provision requiring companies to provide the option for users to voluntarily verify their identities.

Besides, the law also mandates that certain companies can be forced to transfer non-personal data to the government for public good and policy planning purposes. Information about sales location data from e-commerce platforms, for example, can be used to draw dangerous inferences and patterns regarding caste, religion, and sexuality.

Besides, the 2018 draft clearly laid out the timelines for creation of the data protection authority, which is now ambiguous.

Ideally, the law should continue to focus on the protection of personal data and leave the regulation of non-personal data to an independent body that is transparent and answerable to the public.

But is that happening?

The government’s decision to use facial recognition technology to identify those involved in the Delhi riots earlier this year or even the use of the ‘Deepfake Technology’ by the BJP during the Delhi polls — these are trivial compared to what China has done to control the Covid-19 outbreak.

If they want, authoritarian regimes can force their respective parliaments to deploy mass surveillance tools, like Benjamin Netanyahu did in Israel.

The data collected with such technology will enable such regimes to learn about our political views, our preferences, what we desire, what we enjoy, what angers us, in fact our every emotion, with terrifying accuracy.

Knowledge is power, and what more powerful tool can a government have than perfectly accurate data of each of its citizen?

With such technologies, the Cambridge Analytica episode that rocked the US Presidential elections in 2016 would seem like child’s play.

While governments today can argue that such technology will be used exclusively to control Covid-19, who is to stop them from continuing well after the pandemic is brought under control?