Track Santa on Christmas with Alexa

NORAD Tracks Santa will go live Sunday, with about 1,500 volunteers answering calls and emails at Peterson Air Force Base in Colorado. 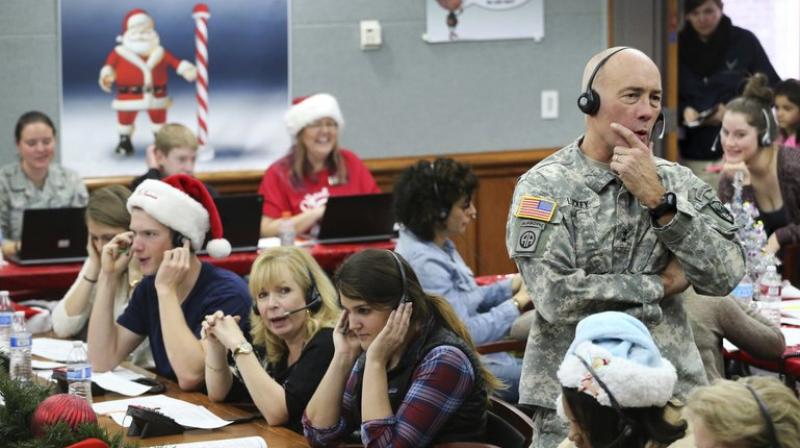 Amazon’s diligent, computerised know-it-all is the latest technology to enlist in NORAD Tracks Santa, the military-run program that fields phone calls and emails from children around the world eager to ask when Santa will arrive.

Now entering its 62nd year, NORAD Tracks Santa will go live Sunday, with about 1,500 volunteers answering calls and emails at Peterson Air Force Base in Colorado Springs, Colorado. Updates will be posted on social media and at www.noradsanta.org.

And if you have Amazon’s voice-activated Echo device, you can ask Alexa once you enable the function.

Technology has always been at the heart of NORAD Tracks Santa, which got its start in 1955 with an old-school glitch.

An advertisement in a Colorado Springs newspaper that year invited kids to call Santa, but it mistakenly listed the number for the hotline at the US Continental Air Defense Command. CONAD, as it was called, had the job of monitoring a vast radar network from a combat operations centre in Colorado Springs, searching the skies for any hint of a nuclear attack by the onetime Soviet Union.

Col. Harry Shoup, who was in charge of the operations centre, took the first child’s call. Once he figured out what was happening, he played along, he said in a 1999 interview with The Associated Press.

“Here I am saying, ‘Ho, ho, ho, I am Santa,’” said Shoup, who died in 2009. “The crew was looking at me like I had lost it.” He told his staff what was happening and told them to play along, too. It’s not clear what day the first call came in, but by Friday, Dec. 23 of that first year, the AP reported that CONAD was tracking Santa.

“Note to the kiddies,” the story began, under a Colorado Springs dateline. “Santa Claus Friday was assured safe passage into the United States by the Continental Air Defense Command combat operations centre here which began plotting his journey from the North Pole early this morning.”

Maybe hoping to soothe a jittery nation, the story added: “CONAD, Army, Navy and Marine Air Forces will continue to track and guard Santa and his sleigh on his trip to and from the US against possible attack from those who do not believe in Christmas.” That was likely a reference to the officially atheist Soviet Union.

The history of the program over the next few years isn’t well documented, said Preston Schlachter, a spokesman for the North American Aerospace Defense Command or NORAD, a US-Canadian command that eventually succeeded CONAD.

But TV and radio stations began broadcasting Christmas Eve bulletins from CONAD and NORAD. And by the 1980s, NORAD was soliciting phone calls from children. (The number is now 877-Hi NORAD or 877-446-6723.)

And this year, Alexa joins the party.

Technology and the Santa Claus story have a long but uneasy history together, said Gerry Bowler, a Canadian historian whose books include “Santa Claus: A Biography” and “Christmas in the Crosshairs: Two Thousand Years of Denouncing and Defending the World’s Most Celebrated Holiday. Every new technology gets tried on Santa,” Bowler said. In the late 1800s, for example, he was depicted chatting with children on the telephone, then a new and wondrous invention.

But NORAD’s Santa tracker is one of the only technological upgrades the public has welcomed into the Santa story, Bowler said. “I think that it will be ultimately incompatible with most technology,” Bowler said. “I’m sure of it, because he represents something timeless, and we don’t want him to become dated. “We don’t want him using a fax machine or carrying around one of those 5-pound cellphones,” he said.