Technology   In Other news  25 Mar 2020  India could soon have its own CoWin-20 app for contact tracing of people infected with COVID-19
Technology, In Other news

The beta version of the app is being tested by a small group of individuals, say reports 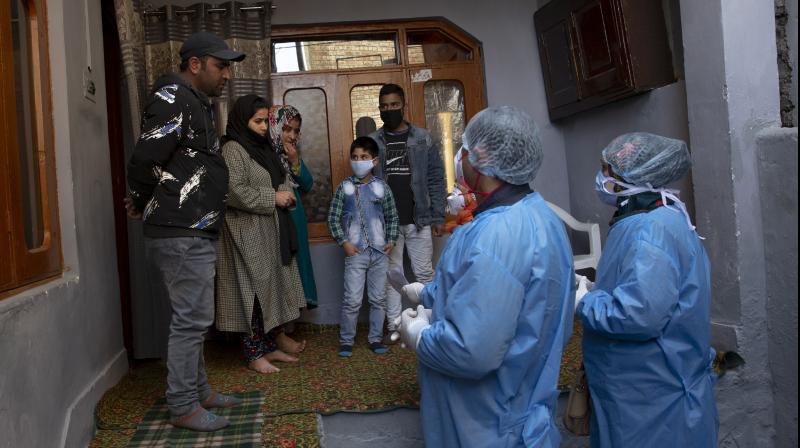 Kashmiri health workers talk to local residents during a contact-tracing drive after the first person in the region tested positive on March 19, 2020. (Representative Image | AP)

Chennai: The Indian government is set to launch an app to aid in the tracing of persons suspected to have contracted the coronavirus SARS-CoV-2 which causes the COVID-19 disease.

Singapore has been successful in using an app to alert users that they may have crossed paths with an infected, as reported by Asian Age. The Singapore government app named TraceTogether uses data logged by Bluetooth signals being passed between users of the app to determine whom a user who has tested positive for the novel coronavirus has been in close proximity off. Other users of the app are thus warned and asked to test as well as self quarantine to prevent the infection from spreading.

India’s CoWin is said to work more like an app that MIT recently launched a prototype of, as reported by Asian Age, where location data is used to trace the route map of infected persons. Both the Singapore app and the MIT app are mindful of the privacy of individuals volunteering to use the app, and accesses only the Bluetooth data and location files as the case may be, and does not touch any other files on the users’ phones.

Privacy would be the prime concern regarding the app being tested by the Indian government too, especially where there have been several reports of data breaches of citizens Aadhaar details in the past.

The CoWin-20 app, which is not currently available on Google’s Play Store or Apple App Store has been downloaded by a small group of individuals who were sent APK files. Once the beta version is tested, a stable version of the app is expected to be out in just a few days, according to a report that cited a poster issued by the Niti Aayog.

The refined model of the app must also pass muster of Apple’s strict standards, especially on privacy, as the iPhone maker’s app platform is closely monitored and regulated unlike Google’s Play store.

Apart from giving out information on the route map of infected persons, the CoWin-20 app will have resources on COVID-19 and locations of testing centres near the user.