Technology   In Other news  24 Dec 2018  'If it ain't broke, don't replace it: Make your old TV smarter
Technology, In Other news

'If it ain't broke, don't replace it: Make your old TV smarter

Your existing LCD/LED TV has more potential than you think. 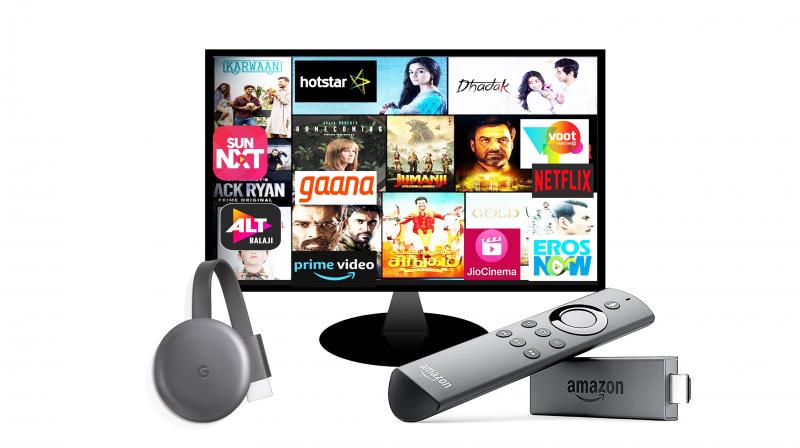 If you don't want to replace your perfectly good non-smart TV, there are some affordable options to get — well— smartish.

Americans have a saying: 'If it ain't broke, don't fix it'. We Indians have an earthier take on this: if it ain't broke don't replace it. Which is why so many of us are managing perfectly well, thank you, with our existing flat screen television sets bought in an earlier era, before TV became smart and connected to the home Wi-Fi Internet.

But we also have to deal with a new reality: OTT or Over The Top content — huge libraries of Indian language movies and music videos, not easily available from the mainstream cable and satellite-based TV providers. “Majority of India has a single TV per household. Affordable data has created an alternate medium where consumers, for the first time, can tap into content basis individual preference at a time and space convenient for them" says Kanchan Samtani, Partner, The Boston Consulting Group which recently surveyed the OTT market in India. Mind you, this is not just a metro phenomenon. Over 40% of Internet connections are in Bharat rather than India and these users have had their appetite for OTT content, stimulated by cheap data providers like Jio. They are ready to pay for the privilege to view reruns of Ramayan and Mahabharat and all those classic 1980s TV shows — as well as latest pay-by-view Bollywood blockbusters. "With their large content libraries, Indian OTT players are sitting on a metaphorical gold mine to serve this increasingly important customer base" suggests BCG. They can view all this video content on their 5-inch phone screens — and aspire to share it with the whole family on their TV sets. And now they can.

Chromecast was a device in search of a rationale in India, for almost 5 years. Now finally it has found the precise niche: the ability to 'cast' any content from a mobile phone to a television set. Hotstar, Hoot, Jio Cinema, SunNXT, Saavn, Gaana, ErosNOW, SonyLIV... there is a wealth of video out there, a lot of it free that any smart phone user can access. Once you plug the device into the HDMI port of your TV and to a mains socket, Chromecast lets you push any content, from phone to big screen. The latest version supports full HD 1080p at 60 frames per second and you can avoid the hassle of toggling through a small sized menu by speaking the name of the movie or song , preceded by 'Hey Google'! For the asking price of Rs 3,499, Google also throws in a few free subscriptions to Indian content providers. And of course, you can always find something to see for free at YouTube, in most Indian languages.

FireTV stick and Chromecast, though often bunched together in comparisons are as alike as apples and oranges. And it is important to appreciate the difference. Like Chromecast, you need to connect the stick to the TV's HDMI port — but there the use cases diverge. The Amazon device does not require your smart phone to view content on the TV. It attaches to your home Wifi, ie you need an Internet connection. Instead of using a phone as a controller, it offers a dedicated remote. And yes, there is the small matter of a subscription to Amazon Prime (Rs 129 a month or Rs 999 a year).

That said, FireTV offers its own large library of infotainment — a lot of International — mostly American TV serials and movies, Indian language films and soaps as well as a growing library of original content. Yes there are buttons to connect to Netflix, Hotstar etc — but I have been using the Amazon stick for a year now, binge-watching dozens of new and classic serials and the uniformally good quality — 2K or 4K itself is worth the stick's price of Rs 3,999. A few weeks ago Amazon launched a 4K version of FireTV stick at Rs 5,999, with new integration to its smart assistant Alexa. This means for the extra 2,000 rupees, you virtually have all the functionality of Alexa and can ask her just about anything —not limited to TV Prime content.

One or other of these two sticky solutions might be just what you may want to 'smarten' your precious LED/LCD TV in time for the new year.