DC talks to the young gun about her start-up’s latest and innovative virtual reality tool. 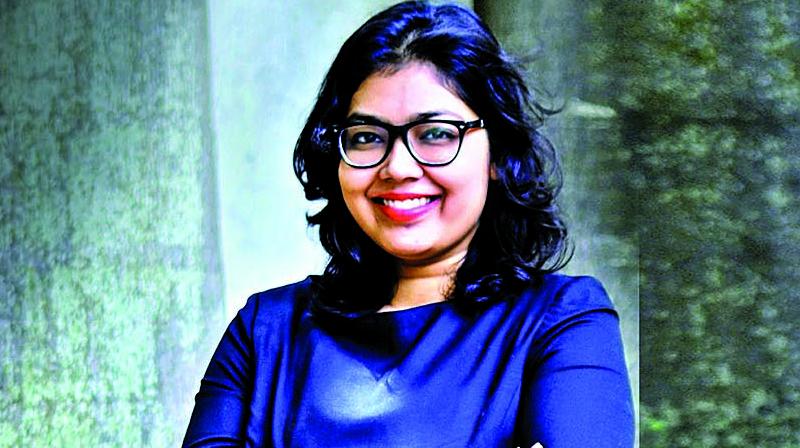 An engineer, entrepreneur, speaker and revolutionist, Vaishali Neotia has always tried to swim against the tide. As a Marwadi woman born in Kolkata, she was expected to take up commerce. “I defied the norm to become the first engineer in my family. Subsequently, I was expected to take up an IT/ITES job to fulfil the ‘engineering career path’. Instead, I chose to start a tech company,” says Vaishali, co-founder of Hyderabad-based augmented reality (AR) company called Merxius.

Merxius’ biggest innovation is RealSim Editor, or RED, a general-purpose tool for Virtual Reality (VR). RED is currently being tested by the Indian Armed Forces to create a training module for engine maintenance. The biggest advantage of this tool, created by Vaishali and her co-founder Hasan Ali Khan, is that it has been successful in bringing advanced tech down to the layman as simply as possible.

“We had earlier tried to do this in the form of another product which used AR but for many reasons we failed. We used our learnings from that experiment and everything else that we have learnt in the last six years to create what RED is today. It is a virtual reality creation software that allows anyone to create their own VR experience without the need of any technical skills or coding. Using a simple drag-and-drop button-based user interface, we are helping democratise VR creation. If you have a VR headset, you can use our software RED to create VR out of 3D models. Think of RED as a Wordpress for VR,” explains Vaishali, an alumna of La Martiniere for Girls’ school in Kolkata and an engineer from Osmania University in Hyderabad.

After creating RED, Merxius’ initial customers were defense organisations and engineering companies. “Our target is any individual or organisation which wants to create VR quickly, easily and inexpensively. All you need is basic computer skills, a VR headset and a 3D model file to begin with,” says Vaishali, who also mentors people at Girls in Tech, Sheroes and US Exchange Programmes.

Interestingly, RED is not geographically restricted, hence Merxius can license the software to people anywhere on the globe. “We are constantly upgrading RED based on customer feedback and user cases and fishing for early adopters who have access to VR headsets and 3D model files and are willing to try RED. We also believe in strategic partnerships to help the business grow,” says Vaishali. And so, what started with a single desktop computer working out of the room of an apartment is now on an expansion spree in other cities.

This start-up is currently incubated by Tata Elxsi, who is helping them connect to potential customers as well. In fact, the company has been bootstrapped throughout. “Our families have pumped in small amounts of money over time to help us stay afloat,” reveals Vaishali, who started the organisation with Hasan when the current ecosystem was almost non-existent.

Talking about the initial challenges, Vaishali says, “We were not taken seriously as a business, but as young kids experimenting with fancy tech. Not having mentors and money hurt us further. Even today, I say that above everything, start-ups should be treated as businesses that companies and governments are willing to become customers of. That is truly when we will start seeing serious growth in the system.”

Entrepreneurs are a tough breed. So, how did she muster the courage to start a business and keep going on? Taking initiative, making hard decisions, managing people and situations, thinking of solutions quickly and creating value are all traits of a successful entrepreneur that need to be applied to everyday life, believes Vaishali. “I think I am like a weathered, strong sail which can handle all that the winds have to throw at me and I adapt to the changes and use the pleasant breeze whenever it comes,” she adds.

But running a business is also extremely hard, feels Vaishali, who was also selected by the US State Department and Fortune magazine to be mentored by Dina Powell, the then President of the Goldman Sachs Foundation and now a senior White House adviser.

Interestingly, Merxius has become such an important part of this businesswoman, that she can’t clearly recall having ever lived a life without the company. “In any other hypothetical situation, I might have had more ‘comfort zones’,” says Vaishali, who goes on to describe her entrepreneurial journey as long, arduous, adventurous, full of surprises, sometimes full of nasty shocks and at others full of plentiful opportunities.

“As a start-up in India, we are not able to just run a business by selling our product, which has its own set of tribulations. We are selling the concept of a start-up which is also a business that needs to survive and just because our overheads are comparatively low and we are a start-up, it doesn’t mean you get to fleece. Apart from all this, we are constantly selling this chosen life path to our friends and families, so they understand, and we keep reassuring ourselves so that we persevere, remain sane and don’t lose sight of our goals,” says Vaishali about sustaining the start-up business.

In this day and age, the ease with which everything appears at our fingertips, and when overnight successes makes years of sweat, tears and hard work look tiny, it is very difficult to create a sustainable business. So it is no surprise that the hardest lesson Vaishali has learnt so far in her entrepreneurial journey is that of patience. “This is why many start-ups shut shop within three years of operation and have become a part of the 95 percent statistic. What adds to this is the ambitious age-related goals and targets we set for ourselves — seven-figure salary by 23, marriage by 25, multi-millionaire by 27, kids by 30; most times we don’t even know if we really want this or it’s the rat race and our warped perception of age that is pushing us to make these decisions,” says Vaishali, raising a very important question: “In all of this, who then has the time to build a Microsoft out of India?” Maybe... Vaishali herself?

USP of RED
RED provides support for the major headsets available today: HTC Vive, Oculus Rift, Microsoft HoloLens and Samsung GearVR. With a single interface, content can be
published to all these devices.

First client
Our first licensee for RED is the Indian Army