Here's a free tool to scan your PC for WannaCry

The application will scan your computer and see if it is fully patched to block all known vulnerabilities. 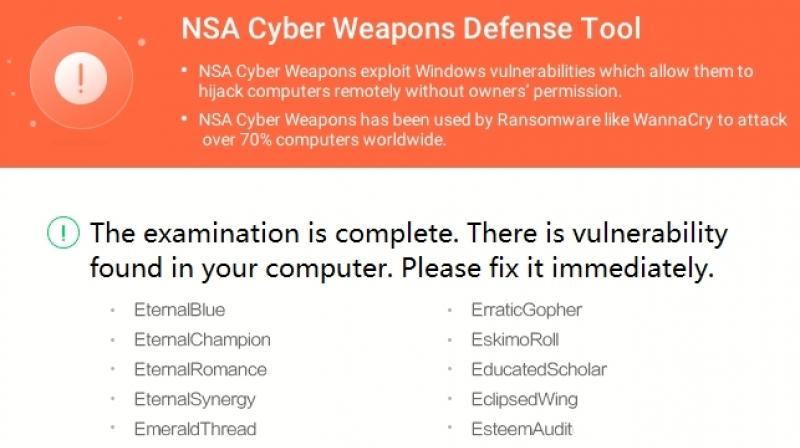 The tool does not need any internet connection, keeping you safe from any risk of being infected while scanning.

WannaCry ransomware has been the talk of the town all last week and the malware has already affected millions of computers all around the world. The ransomware was based on a vulnerability stolen from the NSA by a hacking group called Shadow Brokers. While most computers that were affected were Windows 7, Windows XP and Windows 10 users were relevantly safer by the attack.

To make things even better for users around the world, a security company named Qihu (360 Total Security has developed a tool that can help general users scan their PCs to find out if they are vulnerable to any of the known vulnerabilities that were previously being used by the NSA.

Softpedia reported that the tool is called NSA Cyber Weapons Defense tool and is a freeware for download. The tool can scan for the EternalBlue exploit which was used in WannaCry, and also scan for a bunch of other such malware tools such as EternalChampion, EternalRomance and EternalSynergy.

“Attackers with these NSA cyber weapons can break into more than 70% of the Windows systems in the world. An unpatched PC may be infected as soon as it connects to the Internet even without any click on a link or a file,” the security company explains.

The application will scan your computer and see if it is fully patched to block all known vulnerabilities, and also if there are any other security flaws in the operating system. The tool will also inform you if you need to download any updates to keep you secure.

The tool does not need any internet connection, keeping you safe from any risk of being infected while scanning. Users trying out the tool should do this at their own risk. To download the tool, enter this url (https://goo.gl/2Bs9ht) in your browser and download it.