Technology   In Other news  23 Apr 2019  Tesla unveils its self-driving AI beast chip with 21x better performance
Technology, In Other news

The Tesla chip is on schedule as promised by the CEO back in 2017. 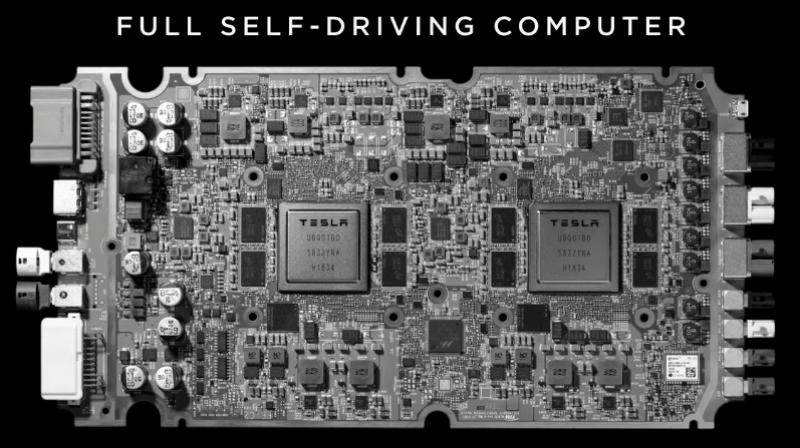 The new silicon chip from Tesla has been officially released and the company says that the chip can perform 21 times better than Nvidia’s counterpart.

Tesla, in 2017, had made an announcement that they were developing their own AI chip for their self-driving cars. The promise was delivered when the chip has finally made its way into the market on schedule. In an event earlier this week, the company finally made the announcement, officially unveiling the chip with the world to have a look.

Tesla’s own-designed fully self-driving computer chip is presently being installed in the Tesla Model S and Model X, since a month now, and the company is also installing it in the Model 3 since over a week.

At the Tesla’s Autonomy Investor Day in Palo Alto held in California earlier this week, Tesla calls it the “The best chip in the world.” The silicon is a 260mm square piece and holds 6 billion transistors. Tesla also claims that the chip can perform a whopping 21 times (21x) better than the earlier one that was used by the company and manufactured by Nvidia. The chip is designed by Tesla and manufactured by Samsung.

Tesla points out that the chip has a twin neural network that can perform 36 trillion operations in each second and costs the company around 80 per cent more than what it was paying for before. Tesla claimed that the chip will also draw more power than before, which is 72W as opposed to the earlier 57W. However, the company confirms that the cars will gain the same range as before and will also not impact the cost.

The new circuit board from Tesla will also sport two chips for redundancy — so you get redundant power and redundant calculations from the chip. The two chips will talk to each other, compare the results from both chips and only then will it steer the car ahead. The redundancy will help the user as if any of the chips fail, the car can still continue driving safely.

Tesla’s CEO Elon Musk said that now that the company has its own chip in every car, all that needs to be done ahead is to improve the software.

Watch the entire presentation from Tesla below: