Boeing will make the safety feature a standard on its troubled new airliner. 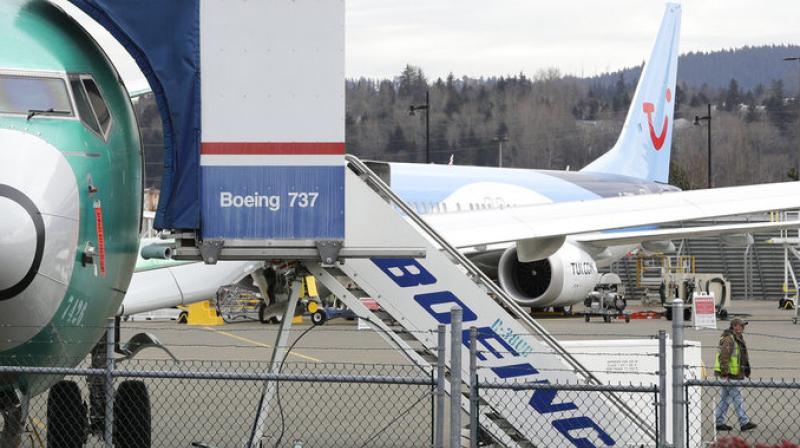 The sensors measure whether the plane is pointed up, down or level in relation to the direction of onrushing air. Software on the Max can push the plane's nose down if data from one of the sensors indicates the plane is tilted up so sharply that it could stall and fall from the sky. (Photo AP)

Boeing will make standard on its troubled new airliner a safety feature that might have helped the crew of a jet that crashed shortly after takeoff last year in Indonesia, killing everyone on board.

The equipment, which had been offered as an option, alerts pilots of faulty information from key sensors. It will now be included on every 737 Max as part of changes that Boeing is rushing to complete on the jets by early next week, according to two people familiar with the changes.

The people spoke on condition of anonymity because Boeing and federal regulators are still discussing details of the upgrade to the Max fleet, which was grounded worldwide after a second deadly crash this month in Ethiopia.

The cause of the accidents has not been determined, but investigators probing the crash of a Lion Air Max jet have focused on an automated system designed to use information from two sensors to help prevent a dangerous aerodynamic stall.

The sensors measure whether the plane is pointed up, down or level in relation to the direction of onrushing air. Software on the Max can push the plane's nose down if data from one of the sensors indicates the plane is tilted up so sharply that it could stall and fall from the sky.

In the Lion Air case, the sensors malfunctioned and gave wildly conflicting information, and the plane crashed minutes after takeoff. A preliminary report described a grim fight by the pilots to control the plane as it pitched downward more than two dozen times.

It is not known whether the same flight-control system played a role in the March 10 crash of the Ethiopian Airlines jet shortly after takeoff from Addis Ababa, but regulators say both planes had similar erratic flight paths, an important part of their decision to ground the roughly 370 Max planes around the world.

The Lion Air plane also lacked another optional feature: gauges or displays that would let pilots see at a glance the up-or-down direction of the plane's nose. It was unclear whether such "angle of attack" or AOA gauges will also become standard equipment on the Max.

Boeing declined to say why the options were not standard equipment sooner.

American Airlines has both options on its Boeing 737s. Dennis Tajer, a Boeing 737 captain for American and spokesman for its pilots' union, said he could not understand why Boeing would make the alert system standard but not do the same with the gauges.

"Anyone who suggests that we should just have one of those two items — the alert and not the AOA gauges — is not embracing giving pilots all the information they should have," he said.

Tajer said the plane can be flown safely without the gauges — most small planes don't have them — "but it's a broader margin of safety if you've got it."

Pilots often rely on separate sensors measuring airspeed to determine if they are in danger of stalling. That is true of the earlier models of the Boeing 737. The Max is different because flight-control software called MCAS can pitch the nose down based on readings from a single AOA sensor.

Max jets flown by Lion Air and Ethiopian Airlines lacked both the sensor-disagreement warning and AOA gauges, according to the New York Times, which first reported Boeing's decision to make the warning standard. Boeing declined to comment on details of customer orders.

The average list price for a 737 Max 8 is $121.6 million, according the company's website, although airlines routinely receive deep discounts. Boeing charges extra for additional features but won't discuss those numbers, calling it valuable proprietary information.

Low-cost carriers such as Indonesia's Lion Air may be more likely than the larger airlines to turn down options to save money.

Since both Max crashes involved foreign airlines, and US and Canadian carriers have had little trouble, problems may have arisen with pilot training in developing countries, said John Goglia, a former member of the US National Transportation Safety Board and an expert in aircraft maintenance.

Many airlines, he said, buy training programs from third-party vendors and not from Boeing because Boeing's program costs more. Boeing's training also requires many hours of pilot work, which some airlines don't want.

The CEO of Ethiopian Airlines said Thursday that the carrier's pilots went through all the extra training required by Boeing and the US Federal Aviation Administration to fly the 737 Max 8 jet that crashed. The accident killed 157 people from 35 countries.

Tewolde Gebremariam said the training was meant to help crews shift from an older model of the 737 to the Max 8, which entered airline service in 2017. In a statement, he said pilots were also made aware of an emergency directive issued by the FAA after the Lion Air crash, which killed 189 people.

The New York Times reported that the pilots of the Ethiopian plane never trained in a simulator for the plane. Gebremariam said that the 737 Max simulator is not designed to imitate problems in the new jet's flight-control software. He declined to say whether the pilots had trained on the simulator.

After the Lion Air accident, Boeing reminded pilots of the process for stopping the plane's automatic nose-down tilt, including flipping two cutoff switches near the pilot's knees. That procedure is unchanged from earlier 737s, and pilots are expected to know it.

John Hansman, an aeronautics professor at the Massachusetts Institute of Technology, said the Ethiopian Airlines pilots clearly struggled to control the plane and might have been too preoccupied to realize whether the anti-stall system was malfunctioning.

"All you know is the airplane is not flying correctly. You're trying to figure it out at the same time you're trying to fly an airplane, which is difficult," Hansman said. He believes the crashes show the need for more pilot training, whether it is done on a simulator, a computer or an iPad, which is becoming more common at airlines.

William Waldock, a professor of safety science at Embry Riddle Aeronautical University, said it is essential that pilots get simulator training on handling a failure of the anti-stall system.

"If they want to put the Max back into service, they have got to get that system so that whatever you are training is what you are going to experience in a real flight," he said.

A spokesman for CAE, the world's leading maker of flight simulators, said the company has sold about 40 Max simulators. US airlines expect to begin receiving them late this year.

A spokesman for the FAA declined to say whether the agency would require new, additional training for pilots in Max simulators before it lets the planes resume flying.