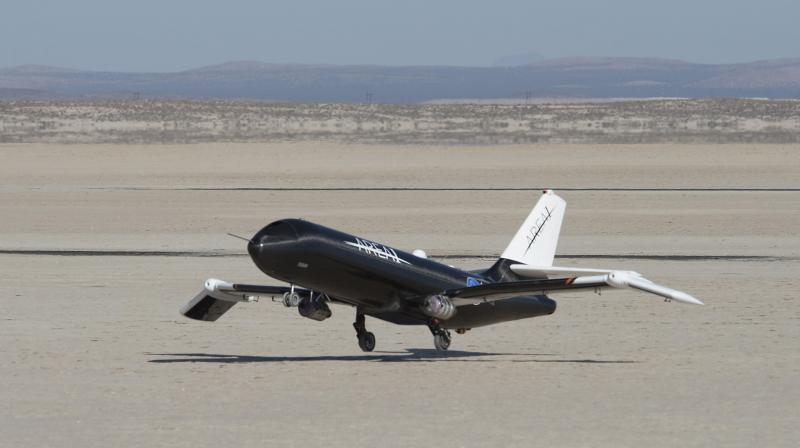 The new technology weighs up to 80 per cent lesser than the hydraulic options and offers up to 70 degrees of variation in wing angles.

NASA has been lately been seen testing an unmanned aerial prototype vehicle at the Rogers Dry Lake situated in the Edwards Air Force Base. While the photos of the aircraft may look like a normal drone, at first sight, a closer look at the wing tips suggests a completely different story — an aircraft with foldable wing tips, like a bird. Meet NASA’s Spanwise Adaptive Wing (SAW) technology onboard the Prototype Technology-Evaluation Research Aircraft, or PTERA.

An aircraft benefits from every inch of the fuselage’s surface and aircraft designers have been on the lookout for designing wings that can manage airflow in the most efficient ways possible. A folding wing technology was tried on the XB-70 Valkyrie aircraft in the 1960’s but was dropped due to bulky hydraulic motors and systems. However, the new technology weighs up to 80 per cent lesser than the hydraulic options and offers up to 70 degrees of variation in wing angles.

Wing surfaces are controlled by actuators and NASA is using a shape memory alloy for these actuators, which will enable it to move parts of a wing by simply applying and withdrawing heat. The benefits of this technology will aid both subsonic and supersonic flights — there will be enhanced control on the former due to reduced dependency on heavier parts such as tail rudders, resulting in more efficient commercial flights whereas the latter will be helped with reduced drag and increased performance in supersonic speeds.

The test flight showed positive results, with NASA’s eggheads managing to achieve up to 70 degrees of wing angles from a flat zero degree wing angle. However, NASA will put the technology under stress when they will be using it to fly an F-18 combat aircraft.