Technology   In Other news  21 Aug 2017  Google stationed volunteers to creat 'megamovie' on Aug 21 solar eclipse
Technology, In Other news

The solar eclipse will begin at Oregon coast (at 9.36 pm IST on Sunday) and end at the South Carolina coast (at 1.36 am IST on Tuesday). 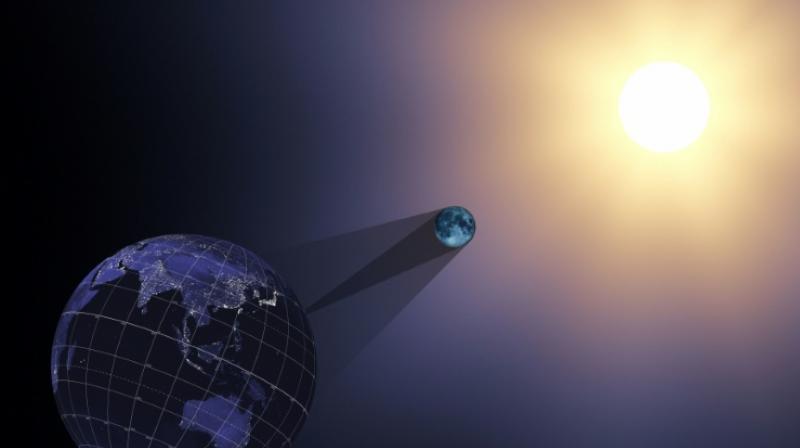 The team will later stitch the images to create a “megamovie” using an algorithm. (Photo: AFP)

Members of Google’s Making and Science initiative and the Multiverse team at the University of California, Berkley’s Space have teamed up to produce a “megamovie” of the total solar eclipse set to take place on August 21 in nearly a century using images from over 1,300 amateur photographers and astronomers.

The total solar eclipse will begin at Oregon coast (at 9.36 pm IST on Sunday) and end at the South Carolina coast (at 1.36 am IST on Tuesday).

“We have got 1,300 people signed up right now. They are people who we have had a chance to sort of interact with and sort of say ok here is what you need to do to take photos that we can use in our project,” Calvin Johnson from marketing and science team Google told BBC.

The team has decided to station volunteers all along the entire path of totality of eclipse from Oregon into Idaho, Wyoming, Nebraska, Kansas, Missouri, Illinois, Kentucky, Tennessee, Georgia, North Carolina and, finally, South Carolina.

The team will later stitch the images to create a “megamovie” using an algorithm. Additionally, the data provided by volunteers will be used to study Sun’s corona – the glowing outermost layer of the sun’s atmosphere that extends millions of miles into space.

“Of particular interest to our team are the moments when the Sun is almost totally eclipsed and again when it is just coming out of total eclipse,” said Google's team.