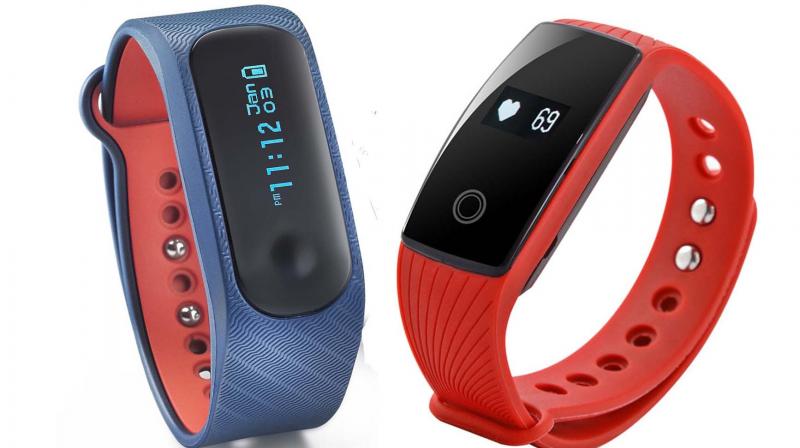 Both, Fastrack Reflex and Zeb-Fit 500 are compatible with iOS and Android.

With an increase in health awareness among people, the usage of wearable technology such as fitness trackers and health bands, has also increased.

According to International Data Corporation, the worldwide wearable market is growing at 16.9 per cent year-on-year and fitness bands are leading the bandwagon. These bands have come a long way from being just a basic pedometer to becoming a smarter device that monitors your heart-rate, sleep pattern and sometimes also being your personal coach. Until recently, there have been only few big players in the market like FitBit, Samsung, Goqii and Garmin, Xiaomi etc., but the growing traction is seeing many new players making an entry.

Fastrack
Recently, Fastrack unveiled its first fitness band in India, the Fastrack Reflex. Targeted towards youth, this band comes with many features like step, distance and calorie counter, sleep monitor, call and text notification, alarm and a sedentary reminder. What’s missing is the heart rate sensor. It also comes with a built-in USB charging port. The black OLED display is housed in a rigid silicone strap that comes in three color variants — purple, black and blue. In terms of design, Fastrack Reflex is not your sleek and slim looking band. It has a rugged and heavy look. It is water resistant with a battery life of 15 days.

Zeb-Fit
IT Peripherals maker, Zebronics upgraded its wearable series by launching the Zeb-Fit 500. Apart from the usual features, this tracker comes with a heart-rate sensor in two modes — automatic and manual. The automatic mode keeps track of the heart rate for every five minutes and shows the results as a graph. Zeb-Fit 500 also has a camera remote option and an anti-lost alert feature. The device sports a slim and sleek design with a 0.49-inch, removable OLED screen, which also display time, phone and SMS notification, and alarm. The battery needs to be charged once in 15 days