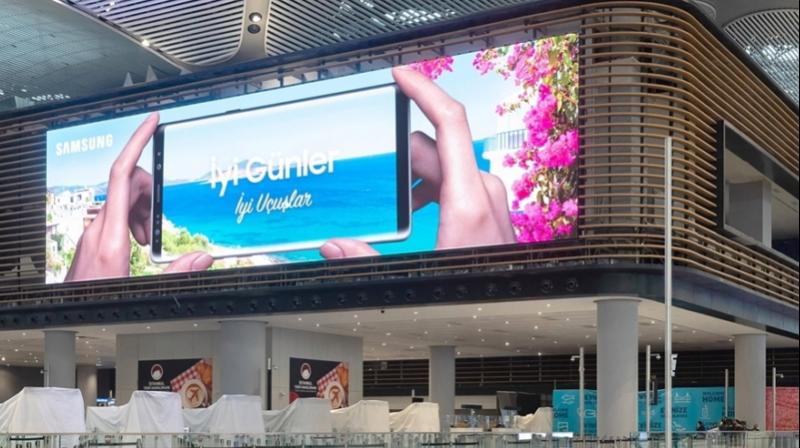 Samsung today announced that it has recently finished implementing its SMART Signage at the new Istanbul Airport, which will be the world’s largest airport once fully-completed, serving 200 million passengers annually. It will host 2,000 arriving and departing aircrafts, with flights to 350 destinations.

his project includes nearly 700 Samsung SMART LCD and LED Signage, including LED displays covering a total of 1,012 square meters. The total surface area of the LED displays is equivalent to that of 2.5 basketball courts. Thanks to the advanced technical service and logistics capabilities of Samsung, the project was successfully completed by a technical team of 28 in only 45 days with the help of B.T. Global, specialised in digital signage, security, data storage and IT services.

The new Istanbul Airport aims to be the biggest international airport in the world, covering 76.5 million square meters. The first phase of the Istanbul Airport opened on October 29, 2018, the 95th anniversary of the Turkish Republic. The airport’s main terminal building, a 1.4 million square meter space under one roof, is where Samsung led the digitalisation project that took place through the installation of digital signage technology. Media Port Istanbul, the operator of the Istanbul Airport Digital Advertisement, entrusted Samsung to provide the digital signages inside the airport and highlighted the importance of integrating cutting-edge technology systems with elegant design of displays.