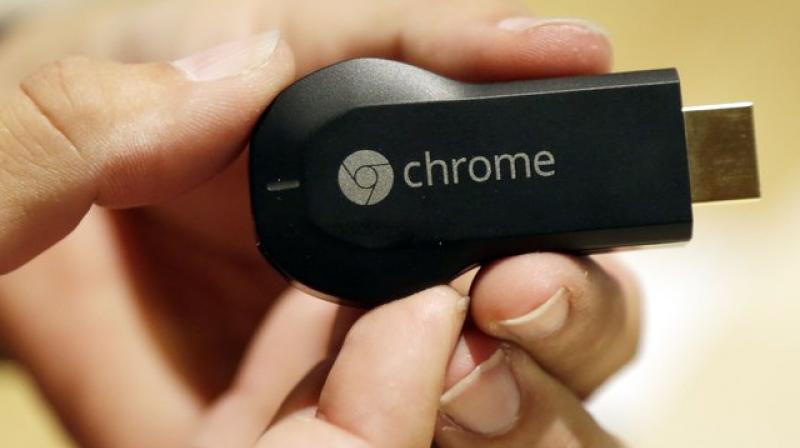 FILE - This July 24, 2013 file photo shows the Google Chromecast device in San Francisco. Amazon is angling for a truce in its two-year battle with Apple and Google over streaming gadgets: It says it is preparing to put Apple TV and Chromecast back on sale. A spokeswoman for Amazon confirmed Friday, Dec. 15, 2017, it is preparing to sell the devices. Links to the products appeared on Amazon.com but indicate they are still unavailable. (AP Photo/Marcio Jose Sanchez, File)

Menlo Park: Amazon is angling for a truce in its two-year battle with Apple and Google over streaming gadgets: It says it is preparing to put Apple TV and Chromecast back on sale.

A spokeswoman for Amazon confirmed Friday it is preparing to sell the devices. However, fresh links for the products that went live on Thursday indicate they are still unavailable.

Amazon stopped selling Apple TV streaming devices in late 2015 in retaliation for Apple not making Amazon’s Prime Video app available on Apple TVs. It said at the time the move was to reduce possible confusion caused by items sold on its store not playing videos bundled with its Prime shipping plan. It also stopped selling Google’s popular Chromecast streaming device that year.

In a major sign of the coming armistice, Apple made the Prime Video app available on Apple TV last week.

Amazon’s decision to start reselling Google’s Chromecast comes after the search giant had stepped up the pressure by threatening to pull its subsidiary YouTube from Amazon’s Fire TV on Jan. 1.

Google had said last week that it would also disable YouTube on Amazon’s new voice-activated speaker that comes with a screen attached — the Echo Show. Shortly after, Amazon also stopped selling Nest’s Thermostat E, which had once been “Amazon’s Choice” in home programmable thermostats. Nest, like Google, is part of Alphabet Inc.

Google argued that Amazon’s version of YouTube was unauthorized and a violation of its terms of service because it initially failed to support features like the ability to log in, comment and see one’s subscribed channels. Google had also pulled YouTube from Windows Phone platforms in 2013 when the app failed to live up to its standards.

Mountain View, California-based Google hailed Amazon’s move, saying it is in “productive discussions with Amazon to reach an agreement for the benefit of our mutual customers.” Apple did not immediately respond to a request for comment.