Technology   In Other news  19 Mar 2019  US Department of Energy and Intel to deliver first Exascale Supercomputer
Technology, In Other news

US Department of Energy and Intel to deliver first Exascale Supercomputer

Targeted for 2021 delivery, the supercomputer will enable high-performance computing and Artificial Intelligence at exascale. 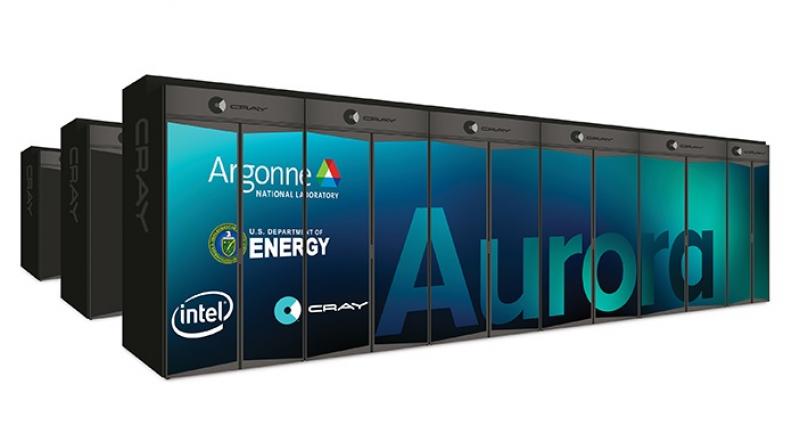 Intel Corporation and the US Department of Energy (DOE) will deliver the first supercomputer with a performance of one exaFLOP in the United States. The system being developed at DOE’s Argonne National Laboratory in Chicago, named “Aurora,” will be used to dramatically advance scientific research and discovery. The contract is valued at more than $500 million and will be delivered to Argonne National Laboratory by Intel and sub-contractor Cray Inc. in 2021.

“Achieving exascale is imperative, not only to better the scientific community but also to better the lives of everyday Americans,” said US Secretary of Energy Rick Perry. “Aurora and the next generation of exascale supercomputers will apply HPC and AI technologies to areas such as cancer research, climate modelling and veterans’ health treatments. The innovative advancements that will be made with exascale will have an incredibly significant impact on our society.”

“Today is an important day not only for the team of technologists and scientists who have come together to build our first exascale computer – but also for all of us who are committed to American innovation and manufacturing,” said Bob Swan, Intel CEO. “The convergence of AI and high-performance computing is an enormous opportunity to address some of the world’s biggest challenges and an important catalyst for economic opportunity.”

“There is a tremendous scientific benefit to our nation that comes from collaborations like this one with the Department of Energy, Argonne National Laboratory, and industry partners Intel and Cray,” said Argonne National Laboratory Director Paul Kearns. “Argonne’s Aurora system is built for next-generation artificial intelligence and will accelerate scientific discovery by combining high-performance computing and artificial intelligence to address real-world problems, such as improving extreme weather forecasting, accelerating medical treatments, mapping the human brain, developing new materials and further understanding the universe – and that is just the beginning.”

The foundation of the Aurora supercomputer will be new Intel technologies designed specifically for the convergence of artificial intelligence and high-performance computing at extreme computing scale. These include a future generation of the Intel® Xeon® Scalable processor, Intel’s Xe compute architecture, a future generation of Intel® Optane DC Persistent Memory, and Intel’s One API software. Aurora will use Cray’s next-generation supercomputer system, code-named “Shasta,” which will comprise more than 200 cabinets and include Cray’s Slingshot high-performance scalable interconnect and the Shasta software stack optimized for Intel architecture.

“Cray is proud to be partnering with Intel and Argonne to accelerate the pace of discovery and innovation across a broad range of disciplines,” said Peter Ungaro, president and CEO of Cray. “We are excited that Shasta will be the foundation for the upcoming exascale-era characterized by extreme performance capability, new data-centric workloads and heterogeneous computing.”