Seth Bledsoe was surprised when his classmates gifted him corrective glasses as a gift allowing him to see green and red. 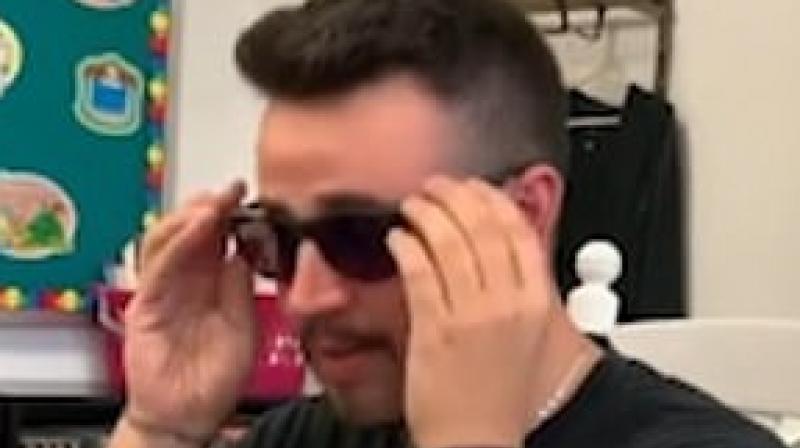 These special colour corrective glasses were purchased by every member of the class including the teacher. (Photo: Daily Mail)

Technology is at a stage when even the impossible is becoming impossible. After numerous reports about the Apple Watch helping people in precarious situations, here is another piece of technology that has changed the life of one very lucky individual. As per a report by The Daily Mail, a colourblind student was given a heartfelt surprise by his teacher and fellow classmates after they gifted him a pair of special glasses which enabled him to see red and green for the first time in his life.

As per the report, “During an early childhood education class at the University of Rio Grande, Jackson, Ohio, Shannon French, 20, captured the moment that she and her peers surprised Seth Bledsoe with the Enchroma sunglasses.”

These special colour corrective glasses were purchased by every member of the class including the teacher. This emotional video shows the teacher, Lynley Carey requesting Seth to have a seat as she gifts him the life-changing surprise as it will majorly improve his ability to teach.

Seth starts to open the box before pulling out the branded box. After reading the attached note, Seth instantly realises what the glasses will help him to do; which leaves him barely able to open the rest of the packaging.

He then proceeds to wear the glasses and immediately begins crying which in turn causes his friends to start crying with him.

The report goes on to state, “As Seth shakes with the glasses in hand, he tries to explain how amazing it is to see colour for the first time. Friend Shannon said: 'Seth has the best heart and you could see the joy of this moment in the video. 'He is so happy and said it was crazy what he's been missing out on seeing.” Seth was unable to see red and green how the rest of the world does and his friends state that no one deserved this gift more than him as he never fails to put a smile on anyone’s face.

Check out the video here.